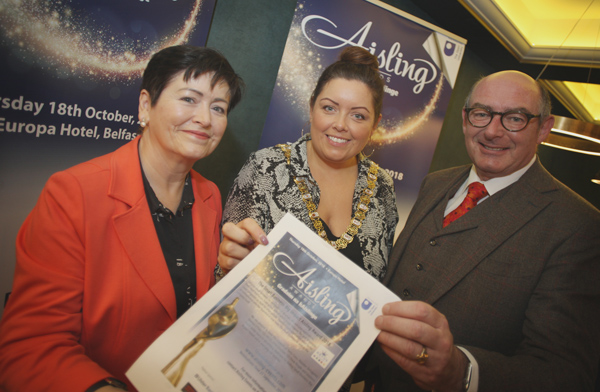 BELFAST’S First Citizen along with a host of other distinguished guests was in attendance at the Balmoral Hotel for the official launch of the Aisling Awards.
Dubbed the ‘Belfast Oscars’ and now in its 22nd year, the November event is set to shine the spotlight on those unsung heroes and community organisations on October 18, who work to showcase the city in a range of fields from business to the arts.
Welcoming attendees to the launch, the Belfast Media Group’s Jacqueline O’Donnell spoke of how some exciting changes have been made to this year’s categories . We are pleased to announce that our business accolade has been restructured to create the first Aisling Small Business-Big Impact Award,” she said. “We’re pleased that Terry Cross, the most successful entrepreneur to emerge from West Belfast, has agreed to serve as advisor to the judging panel which this year will include the leading social enterprise business organisaton in the city, ORTUS, under the stewardship of Seamus O’Prey.
“The Fáilte Award for Hospitality and Tourism is another rebranded category – it is important to acknowledge and reward this business given that it is now the fastest growing sector in the city. New judges for this category will include CEO of the Titanic Foundation Kerrie Sweeney and Fáilte Feirste Thiar’s Director Harry Connolly.”
Awards will be presented in the following categories:
The Positive Belfast Award.
Outstanding Achievement in Education Award.
Outstanding Achievement in Sport Award.
The Culture and Arts Award.
Outstanding Contribution to the Irish Language.
The Small Business – Big Impact Award.
The Fáilte Award for Hospitality and Tourism.
Roll of Honour and the Aisling Person of the Year Award.

Nominations for the awards are now open to all and those wishing to contribute can do so at wwe.aisling-events.com.