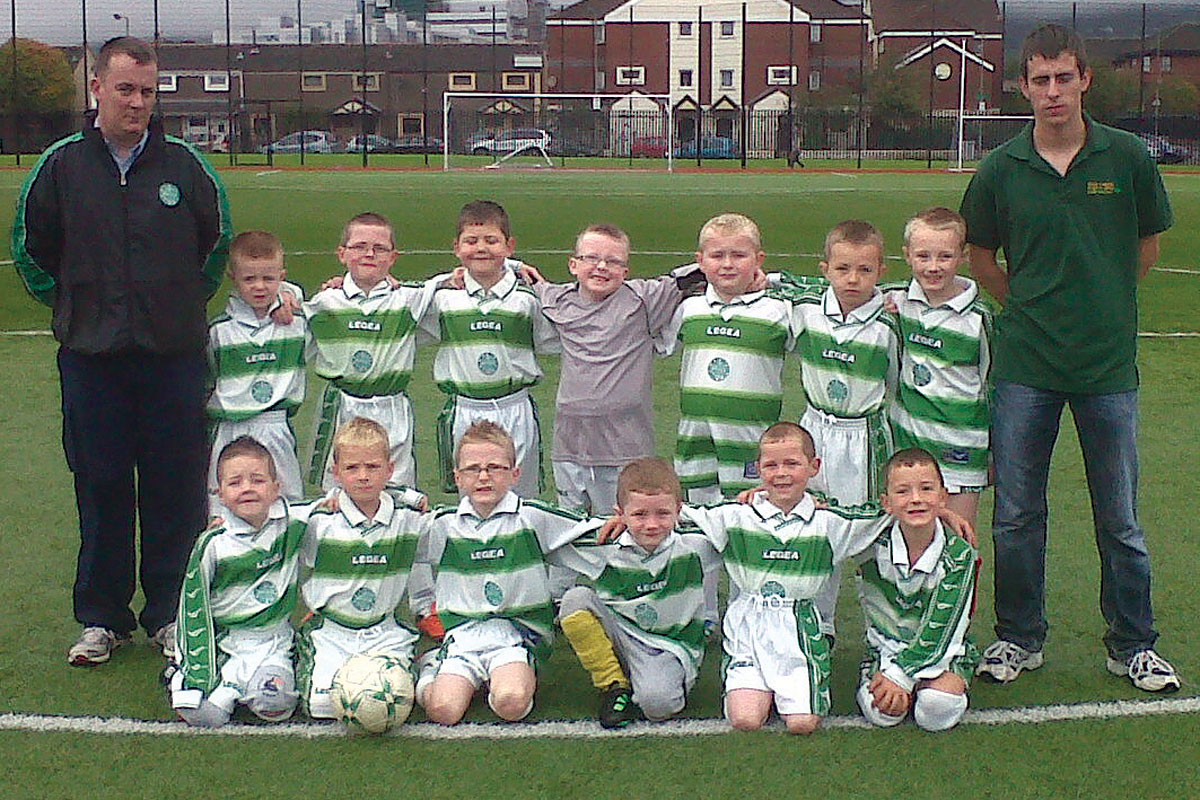 Celtic Boys Colts took on Immaculata at Grosvenor on Saturday. As this was the first ever meeting between the two sides neither team knew what to expect.

The wee hoops knew it would be a very tough game as they were playing below their age group.

The wee hoops started off the game  with the first chance on goal with Peter Cunningham’s strike saved by the Mac keeper.  In the first 10 minutes the ‘Mac had the wee hoops under a lot of pressure!

The wee hoops heads never dropped in the second half with Kaydyn Smith, Darragh morrison and Sean Óg O’Grady in midfield playing some brilliant football.

The best chance came from a beautiful pass from Che Morrison to his cousin Darragh Morrison who hit the post with a powerful right footed strike which fell to our exciting young striker Lewis Jordan, whose shot was saved by the ‘Mac keeper.

The wee hoops applied a lot more pressure through-out the game searching for their goal it was not to be.

In the last minute the Mac were awarded a penalty which they scored. Celtic goalkeeper James Molloy, who had a very good game, was beaten by the powerful strike.

Although this was a defeat for the wee hoops, the management would like to say well  done to every player who wore the Celtic Boys shirt, we are very proud of you all.

The game was played in great spirit by both teams. Celtic Boys will now take on Doyle FC next Saturday, kick-off 9.30am

Celtic boys U9 started well for their first game against Ardoyne FC, with a strong defensive performance from Anton Carville and Stephen Quinn.

Shea Walsh and Declan Rea operated strongly from the wings and played well throughout the game.

Celtic Boys pressed for an opening and their hard work paid off when they went in front.

It started with a strong run from the right side from Walsh, who put Frankie McCashin in on goal and the wee man made no mistake and scored his first goal of the season.

In the second half Aaron Prendergast made a superb entrance and he had the Ardoyne defence all over the place.

He was also unlucky not to get himself on the score sheet with a run from half way, only to hit the post.

Celtic scored from a set piece, after Dylan Hardy out-jumped the defender to score with a header. Celtic Boys could have scored another with Declan Rea stepping up to the penalty spot after Ardoyne handled the ball in the box, but their goalkeeper saved the spot kick.

Dylan Hardy then added another to his tally after a neat finish inside the box and Eamon O’Callaghan got the last goal of the day, adding to an all-round great performance from the whole team.

Celtic Boys U10 got their new season off to a winning start with a hard-fought 2-1 win over Doyle on Saturday.

The two clubs met numerous times last season with results evenly shared but it was the wee hoops who looked the better side this time around.

Louis Kearns was between the sticks for the hoops, with Rossa Morgan, Pearse McMahon, Emma Doyle and Lewis Mackin in defence.

Ethan McCormick and Jordan Walsh made up the centre of midfield with Gary Gourley and Reece Brownlee on the wings.  Up front it was Caoimhín Chapman and Hayden Sumner who posed the threat. Celtic started the brightest and Reece Brownlee was in superb form, causing all sorts of havoc for the Doyle Defence.

Up-front the  hard working Hayden Sumner was unlucky not to open the scoring when he hit the post from long range.

Celtic pressed hard and got the breakthrough they deserved. Ethan McCormick won the ball in midfield and played it wide to Gourley, who sent Reece Brownlee on his way, and the winger made no mistake, firing high into the top corner.

After the goal Celtic continued to press forward and again Sumner was unlucky when he tried to slip Chapman through, only for a good save from the Doyle goalkeeper.

Doyle lifted their game and did manage to equalise with a great strike from outside the box.  This gave them a lift and they did threaten again but the Celtic Defence stood firm and Doyle could not break them down. In the last 10 minutes Stephen Boyle and Sean Paul Lunney were introduced to the game and it was Sean Paul who got himself on the score sheet to make it a winning start for the wee hoops.

Reece Brownlee once again made a dazzling run from his own half, and very unselfishly squared the ball to Lunney who volleyed home in great style.

Well done to all involved, and keep up the hard work.  Man of the match Lewis Mackin.

Celtic Boys began their season in the SBYL U12 Premier Division with a game against a good Rosario side at a wet Hydebank on Saturday morning.

A bright start saw us go ahead when good work down the right wing produced a cross which Deaghlan McMullan finished expertly on his debut.

Despite more good football and resilient defending, we were pegged back before half time with a sloppy goal leaving it 1-1 at the break.

Immediately after the restart, Rosario went ahead after they scored a penalty which Kevin Doherty, who had made some good saves in the first half,  had no chance of saving. The battling qualities of our young side were on display throughout the second half as we attempted to get back on level terms.

Caoimhin McGuinness, who performed superbly on the day, went past three players on the right wing before cutting inside and putting the ball past the Rosario keeper to leave the score 2-2.

However, Rosario scored two late goals, one of which again was from the spot and the other after a defensive mix-up to leave the final score 2-4. A good team performance on our first game in the SBYL but we eventually ran out of legs at the end.

McGuinness, Yasmin White and Stephen Morelli were our best performers on a day when a bit more composure would have seen us win the game.

It promises to be an exciting season and hopefully we can bounce back with three points next weekend. Final Score: Celtic Boys 2-4 Rosario.

Celtic Boys came into this game looking for their first win of the season, and with the good performance on Tuesday the confidence among the team was growing after our first day defeat to Rosario.

Celtic were forced into one change and that was introducing Eoin Mckenna into the starting 11.

The game took a while to get into its stride with both teams playing it cautious in the first couple of minutes, trying to figure each other out, this being the first time these two teams had met.

Eventually the game became end-to-end with Shankill posing the first real threat with their left winger making a great run and nearly sneaking in, only to be thwarted by Celtic goalkeeper Conor Shaw.

This was the wake-up call the boys needed and finally got into their rhythm with passing and moving and great overlap play from Celtic left back Nathan Duffy allowing Eamon Hanna to break the offside and stride through on goal.

With only the goalkeeper to beat Hanna squared the ball to Duffy only to be denied by the out stretched foot of the Shankill keeper.

This give the boys a boost and they kept on pressing Shankill further back, restricting them to only long balls and creating a few half chances with Hanna, Richmond and McDonagh all coming close.

With about 10 minutes left in the half it seemed to be another tough day in front of goal for the boys but some neat play in the middle of the park between McKenna and Thompson saw the ball eventually reach McManus on the wing, who  crossed to Hanna who met it on the half volley, left-footed into the top corner leaving the keeper no chance.

Shankill responded well to going to down 1-0 and began to get to grips with the game again with some set plays and long cross field balls so nearly making their way through but Celtic centre backs Kearns and Gillen dealt with most of it.

Against the run of play some nice football between Hanna and McKenna allowed McDonagh to break through on goal a few minutes before half time but again the Shankill keeper was up to the test, tipping the ball round the post.

From the resulting corner Shankill countered attacked in a three on two situation in Shankill’s favour with the resulting shout looking to be hitting the top corner Conor Shaw got an outstretched hand to tip it round the post.

Celtic, usually slow starters to the second half, couldn’t have got off to a better start with the ball played back to Thompson who split the Shankill midfield with a great ball to left winger Hanna, who in turn split the Shankill centre halves to send front man McDonagh through on goal to slot coolly past the ‘keeper.

With 10 seconds of the second half gone Celtic had doubled their lead.

This give the boys great confidence and time and again Richmond and McDonagh upfront were terrorising the Shankill defence and if it hadn’t have been for the Shankill keeper the game might have been dead and buried but as it was at 2-0 Shankill were still in the game.

The Shankill team made a few changes most notably a centre midfielder who came on and started to pull the strings in the middle of the park.

His vision and range of passing put a bit of pressure back on Celtic forcing defenders in to silly fouls. From the resulting free kick Celtic didn’t clear their lines  and up popped the Shankill centre midfielder to volley into the top corner out of the net.

This give Shankill a real confidence boost and the game really started to swing in their favour and with 15 minutes left on the clock a penalty was awarded to Shankill. Celtic looked deflated at the decision they all looked to keeper Shaw to pull them out of it and so he did. The Shankill captain went for a power shot down the middle only to be denied by the legs of Shaw and cleared away by the Celtic defence.

The game was now evenly posed with both teams knowing that one mistake in the final 10 minutes would prove costly to both teams.

Richmond and McDonagh still proved to be a threat upfront creating one more opportunity each but yet again they were denied by the Shankill keeper.

Shankill didn’t really get another chance after this as the Celtic defence was dealing with everything thrown at them.

The game finished at 2-1. The two teams battled it out well for 80 minutes but on the day Celtic Boys just proved to have that wee bit more to get the victory. Well done lads, keep it up.   Man of the match Aidan McDonagh.