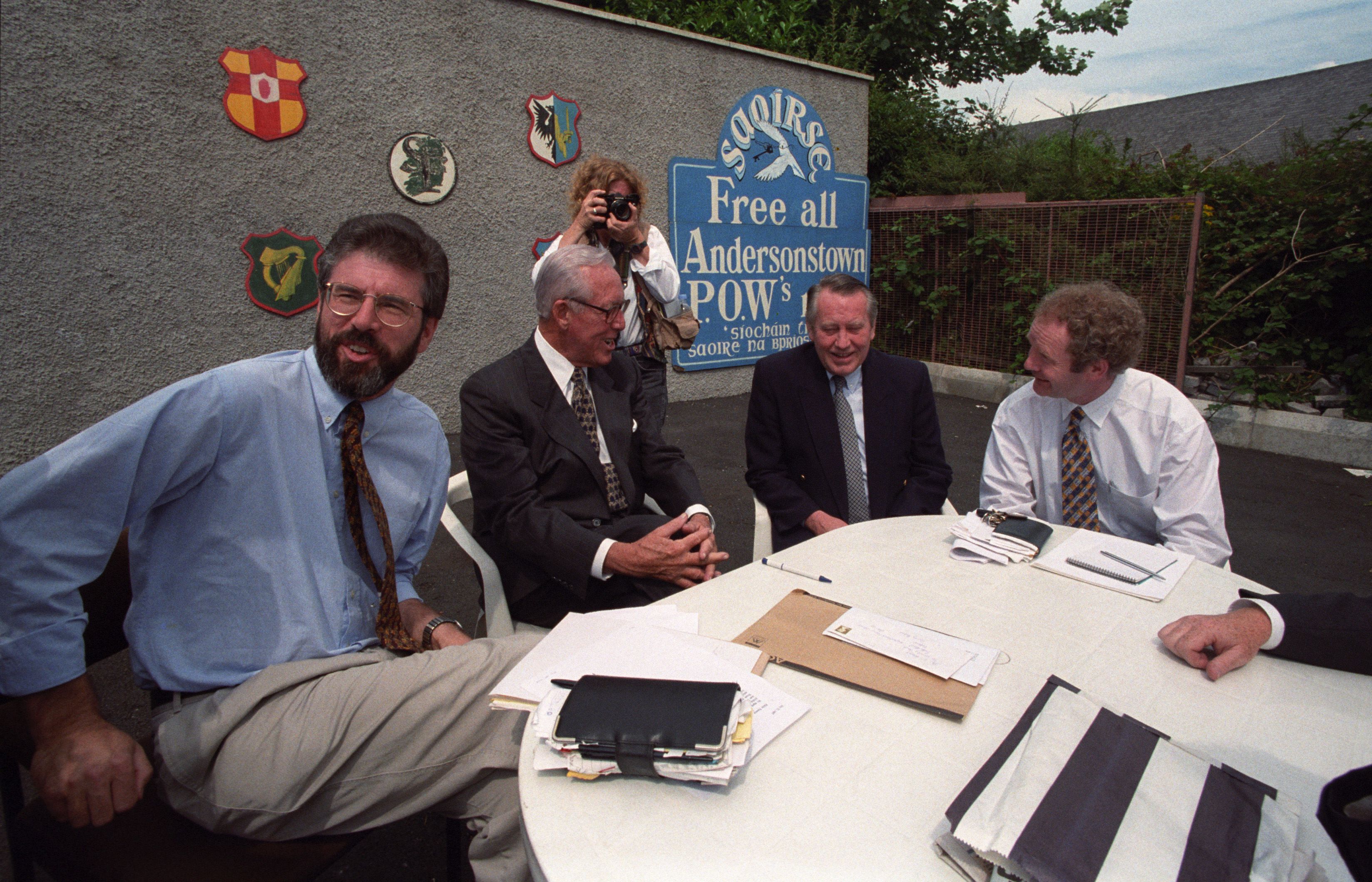 IT’S GOOD TO TALK: Gerry Adams, Bill Flynn, chairman of Mutual of America Insurance Company, Chuck Feeney and Martin Maguinness meeting Sinn Féin at Connolly House in July 1997 – the influential Americans were in Belfast in a bid to secure a restoration o

CHUCK Feeney is an extraordinary human being whose kindness and vision has brought hope and joy to millions. Last week Chuck signed the papers to finally bring an end to Atlantic Philanthropies – a humanitarian and charitable organisation he established in 1982 to give away his $8 billion fortune.

I first met Chuck in 1993. Niall Ó Dowd brought the two of us together. We hit it off from that first cruinniú. Later he was part of a delegation of Irish Americans who came to Ireland on a fact-finding visit. Chuck’s good friend Niall was pivotal in organising that first visit which came after conversations with myself and others in Sinn Féin. It was part of our effort at that time to encourage the development of a peace process.

As well as Chuck and Niall O’Dowd the group was led by former Congress member Bruce Morrison and included Bill Flynn, Chair of Mutual of America and a member of the National Committee on American Foreign Policy, and trade union activist Joe Jamison. Because our first meeting with the delegation took place in Connolly House, the Sinn Féin office in West Belfast, the delegation quickly became known as the Connolly House group.

The group played a hugely important role in creating the conditions for the 1994 IRA cessation. They were especially vital in encouraging and sustaining the involvement of the Clinton White House. Chuck has remained steadfast and committed to the Irish peace process ever since.

Chuck made an outstanding financial contribution to the establishment and running of the Sinn Féin office in Washington in 1995 and to its funding in advance of Friends of Sinn Féin being established.

I didn’t know much about Chuck other than that he was a very successful businessman and a billionaire. But over the years I have met him and his wife Helga many times. Chuck is one of the most remarkable men I have ever met. A very private man who shunned the spotlight and who was totally committed to our efforts to build a peace process. he always remained keenly interested in the latest developments within the peace process.

Chuck cares little for the personal aspects of wealth. Some time after we first met he gave over three and a half billion dollars away to worthy causes. In the years since he created his unique brand of philanthropic commitment, which has been described as ‘Giving while living’, Chuck has donated eight billion dollars to worthy causes. His generosity and commitment to helping others has also encouraged other philanthropists to follow his lead.

Atlantic Philanthropies was an amazing concept. Chuck travelled the world, quietly, anonymously, donating his money to education projects, cancer research, the arts, music, neuroscience, sport and human rights. Millions of people in the USA, Ireland, Australia, Vietnam, South Africa and in dozens of other countries have benefited from his determination to use his wealth to improve the human condition.

Chuck’s philosophy is straightforward – if you give while living you get to see the results. ‘It’s better to give when you’re alive than when you’re dead.’ It’s about making real and tangible change in people’s lives. Ten years ago he wrote to Bill Gates, who has committed his vast fortune to philanthropic projects. Chuck wrote: “I cannot think of a more personally rewarding and appropriate use of wealth than to give while one is living—to personally devote oneself to meaningful efforts to improve the human condition. More importantly, today’s needs are so great and varied that intelligent philanthropic support and positive interventions can have greater value and impact today than if they are delayed when the needs are greater.”

In Chuck I found all the things that are good about America. He was good-humoured, modest, funny. A humanitarian, down to earth, concerned about the world and deeply interested in Ireland. He marched against the war in Iraq in London if I recall accurately.
Often when we met for tea in a Belfast kitchen house he would fumble in his pocket, smile and produce a wee packet of custard creams liberated from his hotel room.

He also usually had copious clippings of newspaper or magazine articles which interested him or which he thought I should know about.

His significant funding of Trinity College and the University of Limerick have enhanced and developed first class educational establishments. But his funding went well beyond these. Atlantic Philanthropies also invested money into Belfast developments including the very successful Community Restorative Justice project, interface projects involving nationalist and unionist areas and the seven million pound S  Comgall’s community project which will be completed, hopefully, next October. In total he donated $1.3 billion to projects in the south and $570 million to projects in the north.

Chuck’s philanthropic bank balance may now read zero but the seeds he has planted in support of fairer, healthier and more inclusive societies will continue to bear fruit for generations to come.

So, thank you, Chuck and Helga, for your generosity and solidarity over many years. Be assured that your efforts have touched many millions and will continue to do so into the future.