THE MOTORMAN – Gerry Faloona: Weekend of thrills and spills at the Circuit of Ireland 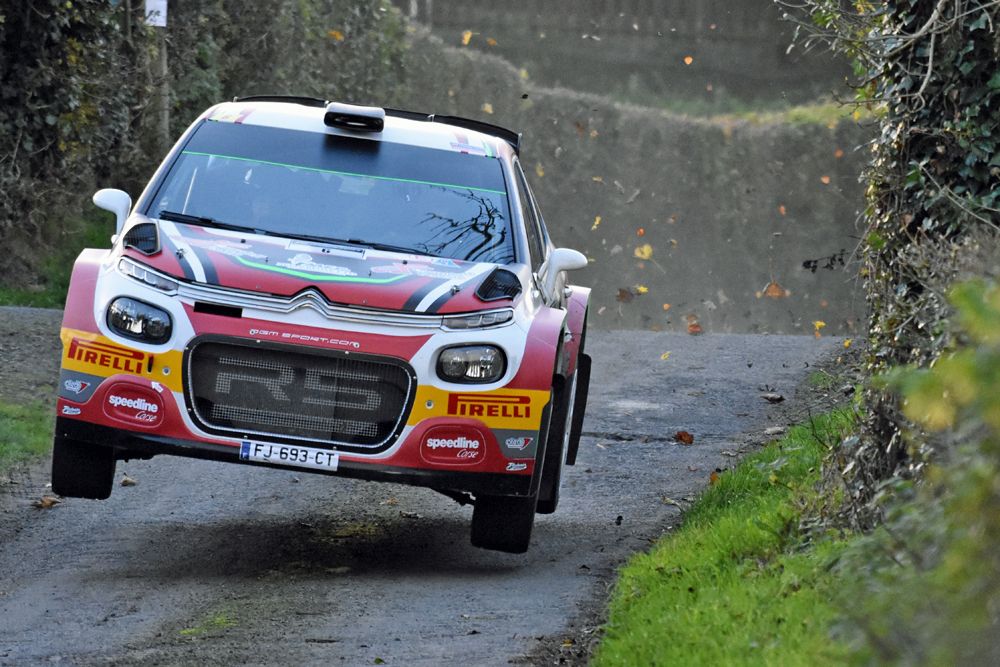 GREEN LIGHT: Jonny Greer will be putting his Citroen through its paces on the scenic North Antrim stages

IF you are planning to spectate at this weekend’s Circuit of Ireland Rally here are the times and places you will need to know...

The service area for the rally is Ballymena Mart on the Woodside Road, Rally Headquarters is Carey Cleaning Machines, also on Woodside Road, and the rally hotel is the Dunsilly in Antrim. Out on the stages, on Friday morning, the first Car due at Special Stage (SS) one Orra Lodge arrives at 09.35, with the first car due at SS2 Lisles Hill at 10.50; after Lisles Hill the cars will head back to service in Ballymena. First car out of service leaves at 13.03 to make its way to SS3 Orra Lodge (2) to start at 13.38. The first car due at SS4 Lisles Hill (2) arrives at 14.53 and when SS4 is completed, it’s back to service back in Ballymena. The first rally car is due on SS5 at 17.41 and SS6’s first car is due at 18.56. Cars then return to Parc Fermé in Ballymena for the overnight halt.

Saturday’s action kicks off with SS7 Cairncastle at 08.51, SS8, Glendun kicks off at 10.11 then it’s service in Ballymena. Competitors are due out of Saturday’s first service at 11.59 before making their way to SS9, the second run over Cairncastle, to start at 12.50. Then it’s on to Glendun (2) SS10 kicking off at 14.10. After the second run over scenic Glendun, the competitors will return to Ballymena to prepare their cars for the final test of the event.

The first of the competitors back out of service leave at 15.58 to make their way to SS11 Cairncastle, arriving at 16.49. After competitors complete the final stage it’s back to the finish back at Ballymena Mart.

Good luck to all the competitors and, remember, motorsport is dangerous, especially when spectating, so please, keep to safe areas and always obey the instructions of your marshals, they are there to help keep you safe.

Have a great day, Gerry.

A SPECTACULAR day of top-level Motorcycle racing will take place at Bishopscourt Raceway located just outside Downpatrick this Saturday, April 16, when the Motorcycle Road Racing Club of Ireland host the Enkalon Trophy Races, Round 2 of the Ulster Superbike Championship.

In addition to a top line-up of local riders, the organisers have attracted entries from the Republic, England, Scotland, Wales and the Isle of Man. Leading the local entries is Alastair Seeley, who with the form he showed at round one of the Championship will be looking to be the first rider to win the Enkalon Trophy for a fourth time. Previous winners of the trophy include some all-time greats including Jonathan Rea, Robert Dunlop and Phillip McCallen.

Classes on Saturday include Superbike, Supersport and Lightweight Supersport, Production Twins, Pre-Injection, Moto-One and SS300. Ex MotoGP rider Jeremy McWilliams currently leads the Production Twin class – now there’s a blast from the past. A bumper entry for the event of over 150 riders should make for some exciting racing on the day. Action commences with the practice sessions from 9am with racing scheduled for an 11am start to the 16-race programme.

The circuit will be open from 4pm on the Friday night for paddock set-up and if you want to make a weekend of it, overnight camping is available on site at no extra cost.

In the Word Superbike Championship, Jonathan Rea claimed a sensational first win of 2022 after getting the better of Spaniard Alvaro Bautista in the final corner to win race one by 0.09secs, with pole-sitter and reigning world champion Toprak Razgatlioglu in third. In the Superpole race, Bautista claimed his first World Superbike win since 2019 after dominating from the start. Jonathan Rea was second, Razgatlioglu, who started on pole, was third.

The Spanish rider added to his Superpole race victory with a win in Race 2 from Jonathan Rea, who was second, with reigning champion Razgatlioglu third. Bautista now heads the world championship standings with 57 points, Jonathan Rea is second with 54 and Razgatlioglu is third with 39.

CHARLES Leclerc claimed an emphatic win in the Australian Grand Prix, the first there for three years due to Covid, and 100,000 spectators watched him dominate the race to finish over 20 seconds clear of Red Bull’s Sergio Pérez.

As the early stages of the race evolved Leclerc’s Ferrari increased in pace and by lap 16 he was eight seconds clear of Red Bull’s Verstappen, with Pérez four seconds further back in third. Leclerc made his first pitstop at the end of lap 21 and after taking on hard tyres resumed in the lead, but Verstappen and the Mercedes pair of Lewis Hamilton and George Russell were now closer to the Ferrari. But after his stop Perez closed in quickly on the Mercedes cars, passing both. On lap 39 disaster struck for Perez’s teammate Verstappen as his Red Bull lost drive and he was forced to retire from the race.

By lap 49 Leclerc had pulled 20 seconds clear of Pérez and it was over as a contest; Russell was a further three seconds back ahead of his teammate Hamilton in fourth. McLaren’s Lando Norris finished fifth, sixth was his teammate Daniel Ricciardo, seventh Alpine’s Esteban Ocon, eighth was the Alfa Romeo of Valtteri Bottas with AlfaTauri’s Pierre Gasly in ninth and Alexander Albon rounded out the top ten in a Williams.