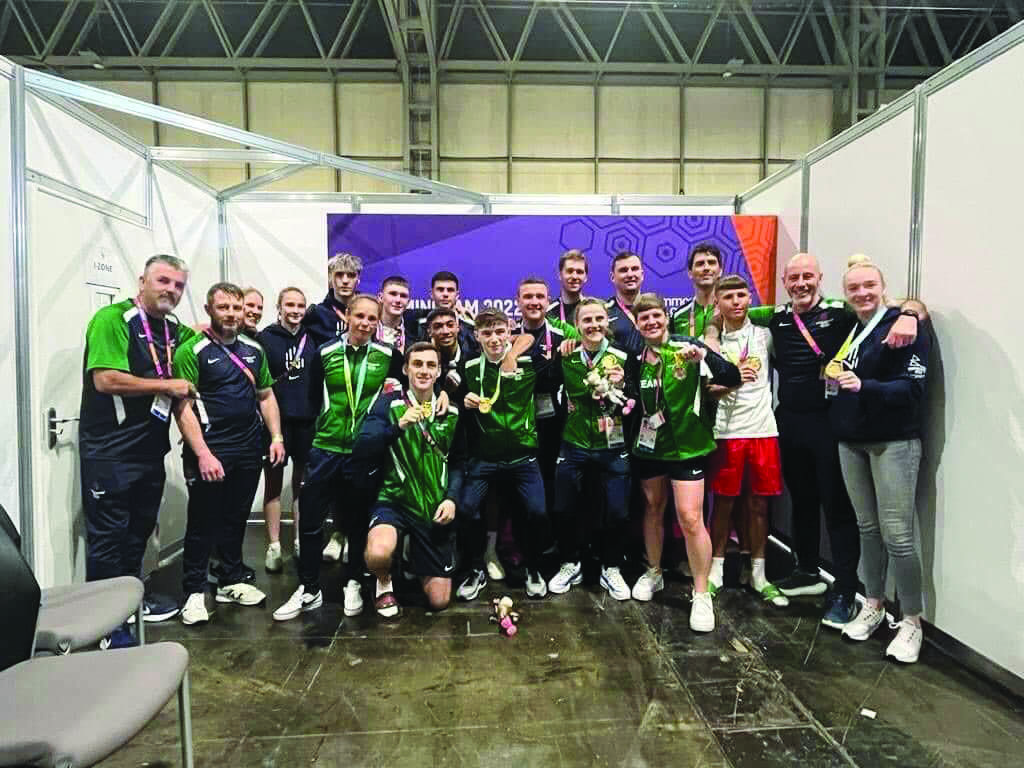 THE Team NI boxers landed into the City Airport yesterday evening to a heroes' reception following their quite astonishing performance at the Commonwealth Games in Birmingham.

Five gold medals, one silver and one bronze was the final tally for the team of the tournament as they exceeded many people's expectations.

The famous five were: Jude Gallagher, Amy Broadhurst, Dylan Eagleson and the Walsh siblings - Aidan and Michaela - who were greeted by family, friends, coaches and clubmates as they showed off those shiny medals that will have propelled them into household names.

It was particularly sweet for Michaela Walsh who lost out in the finals of 2014 and 2018, so to get over the line this time against Elizabeth Oshoba of Nigeria was the sweetest of feelings.

"I've failed a lot of times before, so to finally do it and alongside Aidan makes it so much sweeter.

"My goal in this tournament was to live in the moment and not look too far ahead. I think that really helped me and Aidan by not looking too far ahead, so what will be will be and I'll just enjoy this."

This team is the most successful NI team in Commonwealth Games in history. pic.twitter.com/pLIYL9UpIQ

Younger brother Aidan's stock continues to rise and like his sister, upgraded silver from 2018 into gold this time around.

Tiago Osorio Muxanga of Mozambique was his victim in Sunday's final but he now has some more low-key plans over the next while to wind down after this latest success.

"My main goal out there was just to enjoy it, regardless of what colour of medal came would be a bonus," said the Olympic bronze medallist who continues to get better with each tournament.

"I'm doing something I really enjoy doing, spending time with Michaela and great team-mates and coaches. It was a great tournament for us all so I was happy to be a part of it.

"I've been watching Mortimer and Whitehouse (Gone Fishing) all week so I'll go fishing tomorrow and enjoy myself."

Commonwealth Games Champions 2022. And to do it alongside my brother… What dreams are made of 🥇🥇 pic.twitter.com/XoW7yuzRll

St Paul's ABC star Dylan Eagleson has had a year that dreams are made of, winning bronze that the European U22s and upgrading to silver at the European Elites and on Sunday, move up another step on the podium thanks to his win over Ghana's Abraham Mensah.

"It was good to get a bronze at the U22s and silver at Europeans, but to finish off with a gold at the Commonwealth Games is an unbelievable feeling," said the Bangor native who is only in his first year as a senior boxer.

"My coaches told me after Covid that everyone would know me, and now they do. I love having people wanting me to have good performances and having high expectations."

Perhaps one of the stories of the tournament was Eireann Nugent who returned to boxing after 11 years away and reached the semi-finals in Birmingham.

The manner of her win over Jodie Wilkinson in the quarter-final was incredible as she grew in confidence with each passing moment to set the tone and while Rosie Eccles got the better of their semi-final, Nugent was hugely proud of her tournament.

"The goal was to go out there and make it to the podium - I did just that," said the Immaculata fighter.

"It's not the colour I had been hoping for so but I'm so proud of it nonetheless.

"I went out there, jumped into the deep end and came out on top so that has just me more riled up for what I can achieve next when I have a bit more time (to prepare)."

Carly McNaul had to settle for a second silver having achieved the same at the 2018 Games, but the Ormeau Road fighter could be hugely proud of her efforts despite world champion Nihat Nihat from India proving too slick in the gold medal bout.

McNaul has improved as a fighter immeasurably over the past few years and confirmed that with her performances in Birmingham, yet was still a little disappointed and has vowed to learn the lessons ahead of October's European Championships.

"It's not what I wanted but I'm happy with my performances and did what I said," she said.

"I got to the final and lost to a world champion, so that's something to be proud of and proved I'm up at that level and can learn from it.

"I've the Europeans in October, so it won't be long until I'm back in the gym."