Connolly keeping her cool ahead of Olympic adventure 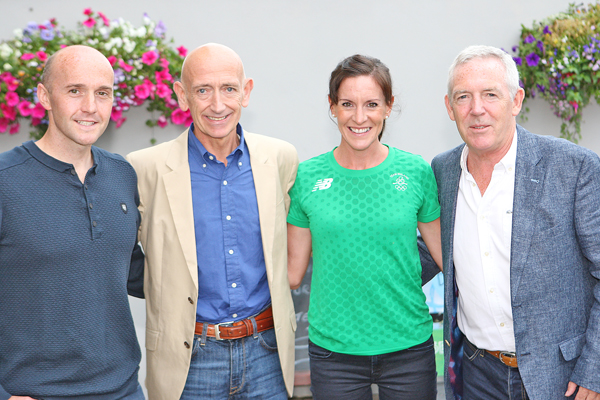 BREEGE Connolly is honest enough to admit that the Olympics Games was never on her radar when she moved to Belfast from her native Leitrim 13 years ago.

Yet, on Sunday the North Belfast Harrier will line up for the Women’s Marathon in Rio as part of Team Ireland.

It has been a remarkable journey for the 38-year-old who modestly never believed it was possible for her to achieve Olympic qualification.

“No, I wouldn’t say it has been a goal,” said Connolly.

“My ambition in running has always been to try and improve. Marathon was the distance I fell into, it was my first ever race.

“My ambition was just to better my time and be the best I could.

“I can’t say it was an ambition – maybe it was always a stretch too far?

“If I am honest, it wasn’t something I thought was attainable.”

That self-doubt was eroded when Connolly comfortably ran inside the Rio Olympic qualifying time of 2:42 when he finished the 2015 London Marathon in 2:37:29.

While she was delighted with her time, she was certain it would be bettered by other athletes.

However, as the various qualifying events came and went, Connolly was still within the top three positions.

On May 23rd of this year, she got the call to confirm her place on the Irish team and she will represent her country in the Women’s Marathon along with Fionnuala McCormack and Lizzie Lee.

“The window opened in January 2015. I ran my time in the London Marathon 2015,” explained Connolly.

“I found out on May 23 of this year. You had to get a qualifying time of 2:42 and they took the fastest three. I found out via a phone call from Athletics Ireland.

“It was a lot of luck on the day - everything went right for me. I managed to stay in that qualifying position until the window closed.

“It was just complete relief because I had been following a couple of girls from down South and I was sure one of them would better my time.

“When those girls ran their races and they weren’t finishing close to where I was at, it became a bit more real.

“It is a really nervous wait. There was relief then complete delight.”

Connolly’s qualification should act as a inspiration for other distance runners throughout Ireland, but competing at an Olympic Games wasn’t on the agenda when she first joined the North Belfast Harriers.

“I am from originally from Leitrim and I moved up to Belfast 12 or 13 years ago for a job in a bank,” she said.

“I joined the North Belfast Harriers to extend my circle of friends. It is one of those things I would recommend to anyone moving to a new city.

“Join a running club because you will meet good people and you will have fun along the way.

“I worked with Matt Shields in the Harriers for the first number of years. Four years ago, I met Paul Elliott and Martin Dean and they took my under their wing.”

Connolly’s clubmate Gladys Ganiel also achieved the qualifying time earlier this year but had to be content with being selected as the reserve for the Woman’s Marathon team.

To have such a high standard of distance runners in the city is a testament to the great work being done by the running clubs of Belfast according to Connolly.

“I think there are also some fantastic coaches. When you have all of these elements and you have the resources like SINI (Sports Institute of Northern Ireland) but it comes down to the people.”

Connolly has honed her own preparation in recent weeks at SINI’s headquarters at the Ulster University at Jordanstown.

In terms of her goals for the games, the Leitrim native simply wants to do herself justice on the world stage.

“Everything is has been going grand so far. Probably the bulk of the work is done now with two weeks to go,” said the North Belfast Harrier.

“I had a week of warm weather training in Monte Gordo in Portugal and then I have been working with the guys in SINI.

“I feel the biggest difference with the marathon is that it will be run in a different climate from what I am used to.

“That was a big focus for our planning and preparation. I have stuck to a plan and done my best everyday and just ticked things off.”

She added: “My goal for Rio is to go out there and put in a really strong race. I remember running in London and feeling that it was a run that was within my control. I remained focused.

“To come away and know that I have done my best. . . that is my real goal.

“In terms of a time, I don’t know. In my own head before the race, I will have a time to aim for.

“As long as I can give it my best because people have been so kind to me and have got behind me.

“I want to show my gratitude to them as well.”

As the Olympics draws ever closer, the focus will, hopefully, switch to the athletes themselves rather than the various controversies which have overshadowed the build-up to Rio 2016.

Team Ireland’s prospects at the Olympics were rocked earlier this year when it was confirmed that both Rory McIlroy and Shane Lowry opted out of the golf team while former US Open champion Graeme McDowell ruled out the chance to step in the fill the void.

McIlroy and Lowry would have been among the favourites to claim gold for Ireland but various golfers used the excuse of the Zika virus when opting out of the Olympics.

The on-going doping scandal involving the Russian Olympic team has also dogged the games but Connolly feels any action which helps rid the sport of cheats has to be viewed as a positive.

“I try not to think too much about it but I am I am obviously aware of what is happening with the Russian team,” said Connolly.

“These things have to happen for us to get the clean sport that everybody wants.

“In terms of the Zika virus, Athletics Ireland and the IOC have been keeping us up to speed in how to mitigate against that and the precautions that we need to take.

“Everybody is making their own choice – I don’t judge anybody.

“Each to their own – it is your life and it is your decision. If the Zika virus is a reason for you not to go that’s fair enough.

“It is unfair to generalise because there are golfers like Padraig Harrington who are made up to be going.

“It depends on the athlete you are and what you deem your championships to be.

“For athletics, the Olympics are the pinnacle of our sport.”