Countdown is on to Positive Ageing Month 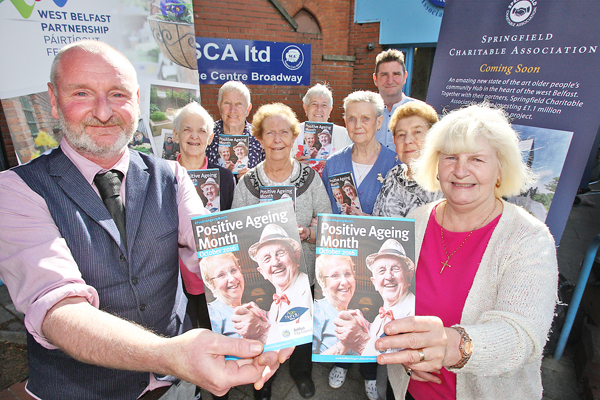 “THERE are festivals for chili, Guinness and oysters so why not one for our older people?” asks Springfield Charitable Association (SCA) General Manger Terry McNeill as Positive Ageing Month prepares to launch in October.

Now in its fourth year, the festival includes activities to suit all tastes from introduction to iPad classes, a shipyard coffee catch-up, pool therapy and tea dances.

“The Belfast Media Group really helped us with the festival back when we first started in 2012,” explained Terry. “The festival was actually born from one of our users who basically turned round and told me that she had worked for 42 years and where was the positivity in ageing? I thought, you know what? Good point. So we set about trying to see if we could do something to promote older people and after a bit of brainstorming we came up with this mini-festival.

“We worked with the Cultúrlann, the Blackie Centre, all the usual suspects and we stuck on something quite low key. There were 16 events running over a week over 10 different locations and it was unbelievable – up to 500 people came to all the events and it was really something else. In 2013, the West Belfast Partnership came onboard and we took it across North and West Belfast, up to 1,000 people that year attended.

“Really the festival idea grew from the clients wanting to celebrate later life,” says West Belfast Partnership Board’s Dermot Glackin. “It was based on the whole idea of wanting to engage and like a stick of rock that theme has remained central as we get ready to celebrate the fourth year. It really has gone from strength to strength.”

Dermot spoke of how the Board and SCA reached out to Belfast City Council last year.

“We were delighted that they came on board with us to create this jewel in the crown for later years. This is a festival to celebrate our seniors.”

On the negativity that can often be associated with ageing Terry said: “I’m very interested in economics and one of the things I noticed after Brexit was the amount of negatively around older people. You had established newspapers such as The Guardian and The Independent saying older people would not have to live with the repercussions of the fallout. What a terrible thing to say. I remember reading that the life expectancy of an older person from West Belfast is less than an older person living in Syria in 2016, which is just crazy, but an example of the negativity that our user was talking about.

“There is a health agenda around the festival,” added Dermot. “At its core it’s about reconnecting people from other quarters across the city. It’s about the importance of staying connected through wee bits of exercise, craft and an overall showcase of all the amazing work that is going on. This grew from West Belfast, so why not grow it Ireland-wide? We are not short of ambition on the potential of the festival.

“You have a range of activities on every day throughout October, whether it’s attending a nearby youth club or leisure centre, and programmes are available online, at SCA and libraries so that people are informed of what is going on. This festival really is a celebration of the contribution that older people make to their communities and the city.”