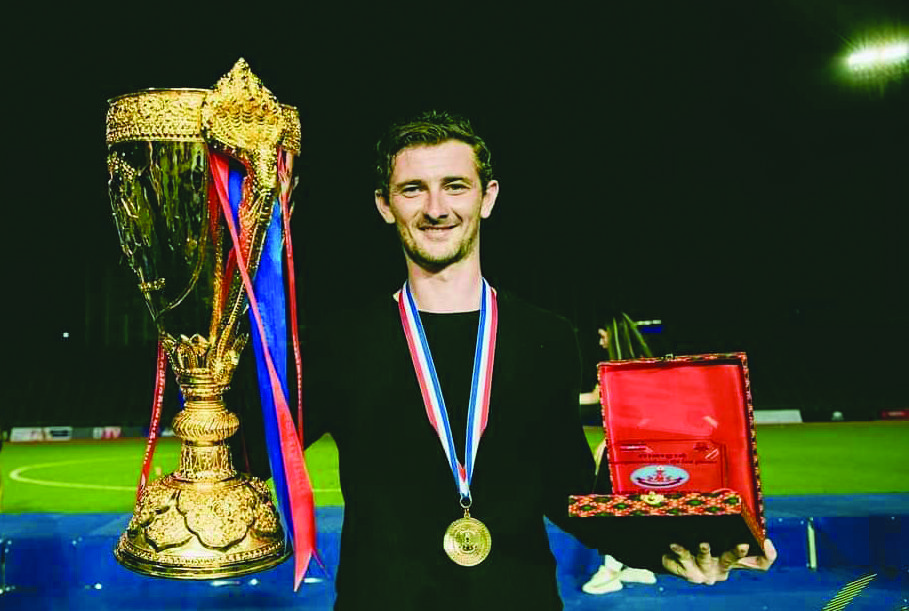 IT’S a long way from the Blacks Road to Phnom Penh, but one Belfast native has already made his mark in the sprawling capital city of Cambodia.

Colum Curtis, a 31-year-old former pupil of St Mary’s CBGS guided Vishaka FC to their first-ever victory in the Hun Sen Cup tanks to a 2-0 victory over NagaWorld FC at the Olympic Stadium earlier this month, but he is only getting started.

Curtis, who cut his teeth in coaching with Immaculata when aged just 18, has already stamped his mark on Cambodian soccer but his sights are set even higher as he plots the club’s path in next season’s Asian Football Confederation (AFC) Cup.

It’s Saturday night in southern Cambodia when the Belfast native, enjoying a short holiday, reflects on what has been an incredible start to life as head coach of a club that was only founded in 2016.

Cambodian soccer is still in its infancy, but there are lofty ambitions and Curtis is keen to help in its ascent, but just how does a man from West Belfast end up in the South East Asian nation plotting a course and winning trophies, first as an assistant and then as head coach?

“My fiancé, Sinead, was offered a job in a school out here, so I did some research on the league and obviously, it is a professional league with the top teams going onto play in the AFC Cup,” he explained.

“I was just finishing my UEFA A Licence so I knew I would have been one of the highest qualified if I came out here. I researched a few of the other coaches and what qualifications they had so I said to her to go for it and that it would be a good opportunity for her, and that I’d find a club.

“After a week, I started working at Svay Rieng who were the champions last year. Their coach was from Limerick, Conor Nestor, so I was with them for the last four months of the season when they went onto win the league.

“At the end of the season, we couldn’t agree a contract so after about three days the club I’m with now (Visakha) offered me the job there.

“We went onto win the Cup, which is quite prestigious for them as foreign players can’t play in it - just the locals - so it means that bit more to the Khmer people.”

Much has changed in Cambodia and indeed, Phnom Penh, since the Khmer Rouge’s notorious period of 1975-1979.

Still a developing nation that bears the scars of that period, it is nonetheless a welcoming society and people with natural beauty and world-famous landmarks such as Angkor Wat.

Therefore, the new culture into which Curtis and his fiancé arrived was one in which took little time to adapt with the language barrier not as foreboding as one may anticipate.

“When I first got here, I studied three hours per day for two weeks so I can speak a little bit and understand a good bit,” he confirmed.

“I have a translator as well but most people around the club’s English is very good anyway. Generally, around the country a lot of people speak English whereas in China you were snookered unless you went to learn Mandarin.”

China was one stop in a coaching career that began as an 18-year-old when his brother, James, expressed an interest and their father put them in touch with Martin Boyle.

It was familiar territory for Colum who played at the club as a youngster before moving to Lisburn Youth, but it was on the outside the sideline where he felt there was a natural fit.

Aged just 18, Colum completed his Level One-Grassroots badge, and this was the first steps on a journey that would see him travel the globe.

“After my first session I just knew this was what I wanted to do,” he recalls.

“I was in Boston (coaching) for a summer and went back out the next summer independently, working at a few camps.

“The Americans would find it difficult to get the UEFA-licenced coaches out there. My fiancé came out with me and we made a bit of a holiday out of it at the end.

“When I came back, I think within two weeks I was living in Beijing. I flew to Edinburgh to get my visa and went straight out to China. I lived there for three years before coming back home to work in the IFA’s High Performance with Jim Magilton before coming out to Cambodia.

“Being around people like Jim Magilton, Declan Devine and Gerard Lyttle stood me in good stead as they have all managed at the top level. I’d still be in touch with them if there is anything I’d be unsure of as they’re always happy to help.”

After cutting his teeth in Cambodia alongside Nestor with Svay Rieng, Curtis was thrilled to take up the post at Vishaka.

Despite the club just being in existence for four years, they hold lefty ambitions, and it took the Belfast man little time to tick the first box by claiming the Hun Sen Cup.

The game, played on November 7, saw Keo Sok Pheng net the opener after a counterattack in the 41st minute and when Cheng Meng doubled their advantage 12 minutes into the second period, they were able to see the game out for a historic win.

The win allows the club entry into the AFC Cup with those details still to be confirmed due to Covid-19, but the hope is they can build upon their Cup win and continue the progress of Cambodian teams in recent times.

“It’s massive for the club because over the last four years, teams from Cambodia have been doing ok in it (AFC),” said Curtis.

“This season, the current champions are doing really well as they beat a team from Indonesia so that has helped to put Cambodian football on the map.

“The national team got to the semi-final of the South East Asia Games and that’s the furthest they’ve ever been in their history, so that’s good for our boys and helps me attract higher quality foreign players as well as they’d want to play in that competition, so it’s big for many aspects.”

Making their mark in the AFC would represent a major achievement for Vishaka and their Belfast manager who will spend the off-season preparing for his first full campaign having had time to bring in the players he has identified to drive the club forward. He will also get a lot more time to imbed his style of play with the group.

Already having made huge strides, it is an exciting time for Curtis and the club as they aim to mount a challenge for league honours and raise the bar further.

“My objective from the club was that they wanted to be competing in the AFC Cup in the next five years, in terms of being competitive against teams from bigger footballing nations,” he added.

“Step one was to get us there and it was great to do that in the first year so then we will look to challenge for the league next year.

“When I came to the club, all the players had been signed so next season I get a proper crack at it with my own players and a settled pre-season as I came in just before the start of the season, so I couldn’t implement everything I wanted to in the short timeframe.

“I didn’t have my own staff for the season that I do now and my own players so I’m excited for it.”