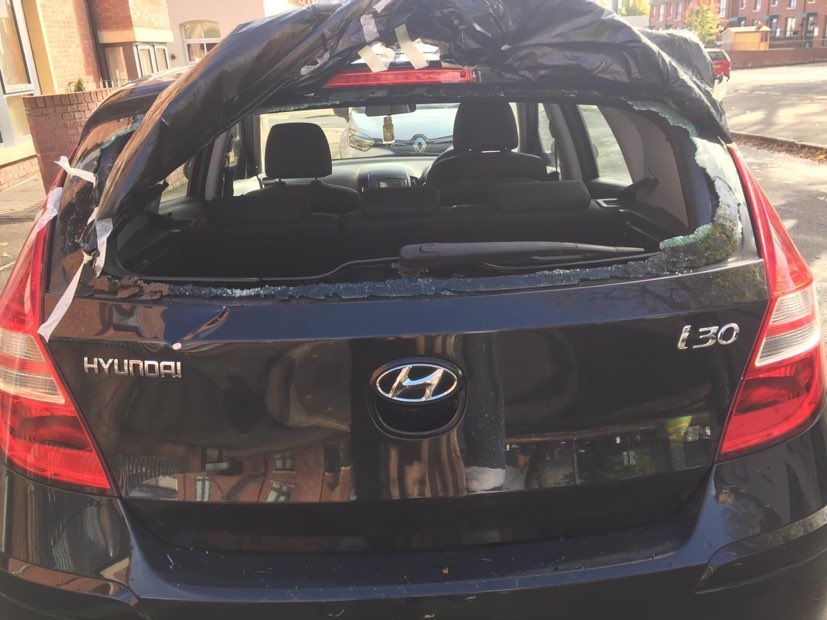 TARGETED: An OAP has been left shaken after this attack on her car

A 75 year-old pensioner has been left “shaken up” after her car was smashed by thugs outside her Limestone Road home.

Edna Kane was watching TV on Sunday night when her car, a black Hyundai was attacked with a metal bar shortly before 7.30pm.

Speaking to the North Belfast News, her daughter Deborah Kane said she believes the attack was sectarian motivated.

“She was inside watching TV. I live a few doors down from my mother and it was my daughter who came in to tell me what happened.

“It looks like it was a sectarian attack. The group of fellas were seen after the attack heading back towards Tiger’s Bay.

“My mum is 75-years-old and she just can’t be dealing with all this extra stuff.

“The car is completely smashed up. There is also some paintwork damage.

“She was 75 in July and we were meant to have a party but due to Covid-19 restrictions, it was cancelled. Instead, a few family members got some money together and bought her the car.

“Her old car broke down last year. She uses it just for essential journeys like going shopping and things.

“She is shaken up about it. I don’t know how much it will cost to fix the damage.

“The houses are beautiful up here. It is disappointing that this has happened. The people behind this are just thugs.”

“This interface trouble has been going on for too long now,” he said.

“We have called for static police patrols in the problem areas which has been refused up to now.

“For a 75-year-old trying to live her life in peace and having her car damaged in this way is just a disgrace in this day of age.”

A PSNI spokesperson said: “Shortly before 7.30 pm on (Sunday, 11 October) police received the report of a Black Hyundai  being damaged in the Limestone Road area of Belfast.

“Enquiries into the incident are ongoing and anyone with information are asked to contact 101 quoting reference 1679 11/10/20.”