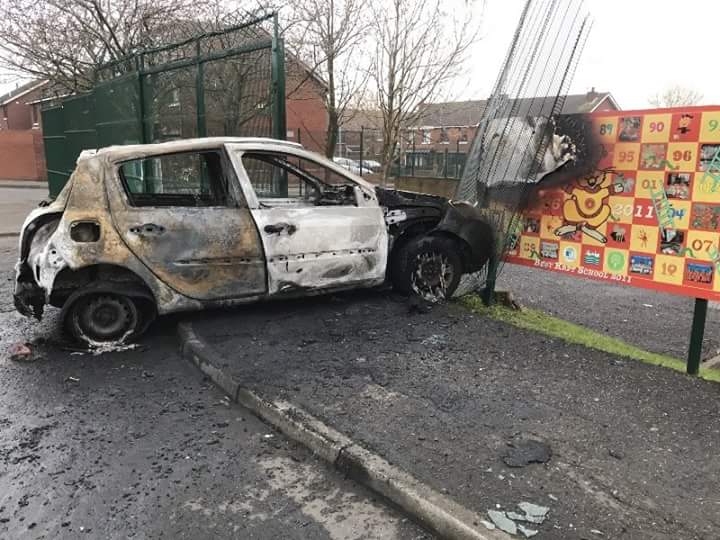 THE PSNI have been urged to ‘take control’ after death drivers ploughed a stolen vehicle into a nursery school in the lower Falls in the early hours of Tuesday morning. Children, parents and staff were shocked when they arrived to find the destruction, including the burnt out wreck, at the entrance of St Peter’s Nursery School on Servia Street.

Police said the black Renault Clio was stolen from the Lisburn Road area of South Belfast the night before, crashing around 2.20am. Police said they were at the scene “within minutes” but the offenders had made off.

Significant damage to the perimeter fencing was caused, as well as disruption to the school and the local community. Connor Campbell from the Workers’ Party condemned what he called the “recent upsurge” in anti-social behaviour, urging anyone with information to contact the PSNI.

“We are angered that pre-school children are having to see the damage done by so-called death drivers. These children are our next generation and it is greatly disturbing to think that they will grow up thinking is this all West Belfast has to offer?” He raised concerns regarding anti-social behaviour and explained that another vehicle was burnt out in the Turf Lodge area and the Springfield Road was left littered with debris from ‘mayhem’ at the weekend.

“The ongoing work on the Springfield Dam is an asset to our community but is already being destroyed before it has a chance to be completed,” he added. “We are calling on the PSNI to have more presence on our streets and for all statutory bodies to take more control of those convicted of such crimes. West Belfast deserves better for all our residents and for the next generation growing up in our community.”

Temporary fencing has been erected at the school until the damage can be repaired. Sinn Féin MLA Fra McCann said he was thankful this incident did not happen during school hours, adding it was a “terrible sight” for those arriving this morning.

“I have no doubt the person who carried out this act lives close by and has been part of the gang who have wreaked havoc and terrorised their community for years,” he said. “They need to be removed from this community and the PSNI need to act to ensure when these people are arrested bail is not an option.”

A silver Lexus which had been stolen during another burglary in south Belfast, crashed and was abandoned on the Springfield Road just before 5.30am. The crash caused damage to a lamppost, road signage and the fence of a primary school.

IRSP Upper Springfield representative Gerard McCoubrey said the criminals are using the streets of Turf Lodge “as a race track” criticising the PSNI for their absence. “In an extremely built-up area like this one, it will only be a matter of time before someone is knocked down and seriously injured or even worse,” he said. “The PSNI have proved once again that they are incapable or simply unwilling to assist local residents when such instances occur. They were nowhere to be seen as this car drove erratically around the Turf Lodge area.”

Appealing for information Chief Inspector Kellie McMillan said police have and will continue to work with community and criminal justice partners to take stolen cars off the streets, arrest offenders and bring them before the courts. “Criminal activity such as this is beyond dangerous and reckless and serves no purpose whatsoever. These death drivers are not wanted in the community of West Belfast. They have no thought for the local community or for the consequences of their actions which can so easily have a devastating and detrimental impact on those innocent people around them.

“The Auto Crime Team has been instrumental in vehicle thefts being reduced in West Belfast by 42% over the last 10 years. However, we must continue working together to tackle car crime.

“Police are committed to working in partnership to reduce anti-social behaviour and death driving. If anyone witnesses any death driving in their area, please contact us immediately on 999 in an emergency, or 101 to discuss the issue or share any information linked to community safety issues. Information can also be passed anonymously to the independent charity Crimestoppers on 0800 555 111.”