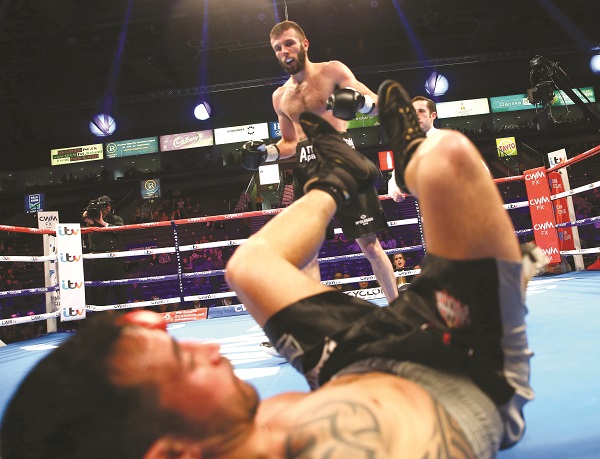 Anthony Cacace believes his punching power can make the difference on Saturday night against Martin J Ward
WAITING in the wings for a title shot has been like waiting for the proverbial bus for Anthony Cacace as two have suddenly come along at once.

‘The Apache’ has been in line to fight for the British super-featherweight title for almost two years since annexing Celtic honours, but for one reason or another his chance didn’t come until now when his mandatory status ensured that holder, Martin J Ward had no option but to either defend against the 28 year-old southpaw or vacate one victory short of winning the coveted Lonsdale Belt outright.

Not only is the 28 year-old West Belfast man getting his long-awaited shot on Saturday’s ITV Box Office card (Cacace is expected to be in the ring just after 7pm), but an added bonus is that the vacant Commonwealth title is also up for grabs.

It is a position the 15-0 Cacace has longed for in what has been something of a frustrating career with his silky skills and noted punching power rendering him a man to avoid, but at long last he can kick the same door through that he has been knocking on for years.

“It’s been a long time coming I feel anyway,” said the ever-relaxed Cacace prior to Saturday’s meeting with Ward at Wembley Arena.

“I’ve been a bit inactive, but I’ve been trying to do as many rounds to bring me to where I need to be for this fight. There are two titles on the line and I’ve always dreamed of winning these kind of titles.

“This is the opportunity I have been waiting for, so I hope I can take it.”

Indeed, Cacace has been out of the ring since November when scoring a six-round points win over Leonel Hernandez in Manchester, two months after a knockout win over Jamie Quinn.

That victory was his first fight in over a year since taking the Celtic title with a 10th round stoppage win over Ronnie Clark, a man who pushed Ward all the way in a British title fight late last year before losing narrowly on all three cards.

Now only did Clark make a fight of it, but he dropped the 25 year-old Yorkshireman in the 10th and this gives Cacace high hopes going in this weekend.

“We know Martin Ward is snappy and quick,” he said of the undefeated champion who has a record of 17-0-2.

“One thing I do know is that he was put down by Ronnie Clark which is a big positive for me because I think I hit a lot harder than those guys.

“If I hit Ward, hopefully I won’t just be putting him down, I’ll be putting him out. That’s the plan, but he’s quick and elusive so it’s all about getting my reactions that bit quicker.”

Ward is undoubtedly a man who has sharp skills, but in his last outing against Maxi Hughes (their third meeting with Ward winning one and drawing the other), it was apparent he is a man who can be easy to hit and for a power-puncher like Cacace, that is a major advantage.

Perhaps having some form of upper hand is why the defending champion was reluctant to travel to Belfast despite Cacace’s manager, Pat Magee winning the purse bid over Eddie Hearn who promotes Ward.

“We thought it would be June 10 in Belfast, but it didn’t work out that way.”

“It’s done me no harm anyway as it’s given me more time to prepare and more time to get fitter, so I’m just looking forward to getting it done now.”

Those preparations have taken place in the ever-expanding stable of Ray Ginley and Dee Walsh.

All three are old training partners under the McCullaghs who Cacace was initially back with after splitting with Brian Magee, but things didn’t work out and he says he is in a very happy place under the guidance of the up-and-coming duo.

“I’ve trained hard, flat to the mat every day, training in the morning and afternoon.

“One day I would box, strength and conditioning. The next I would spar, sprints and runs. It mixes it up which is good. Both of them work brilliantly together.

“There’s all this new stuff coming out that people are doing and they are clued in with that because Raymond does a bit of personal training so he knows. We have all gelled well, so I’m loving life.”

If he is loving life now, it will only be embellished come Saturday night should he get his hands on the two title belts in what is something of an All-Irish, British title fight given Ward’s Irish Traveller roots.

There is an air of inevitability this will be his coronation night, when the British boxing public finally get a glimpse of skills and fearsome power those in Irish boxing circles know only too well. It will not be a one-way cakewalk however.

Ward is proven campaigner who will make life awkward for Cacace and may bank the early rounds, but the West Belfast man is also one who can box clever, holding a height and reach advantage with that added bonus of punching power.

Not only are the two belts up for grabs, but victory will almost certainly catapult the winner into a European title challenge and while Cacace is licking his lips at the prospect, there is not shifting his gaze from the job in hand on Saturday where it is simply a case of win-at-all-costs.

“It’s going to be one of those fights where it will either be really exciting or really boring,” predicts

“No-one in Britain really knows me. They may have heard of me but they haven’t seen me box. Being on ITV just gives me the platform to bring it to that next level.

“All being well, ITV could back me and I could be mandatory for the European title if I was to beat Ward as Ward is mandatory right now.

“I’m not looking past Ward as he is a world class operator I believe.

“He has a couple of chinks in his armour I have to exploit, but it’s all about this now. I’m preparing for Ward and nothing else. This is a big thing for me, so it’s all about winning this fight.”