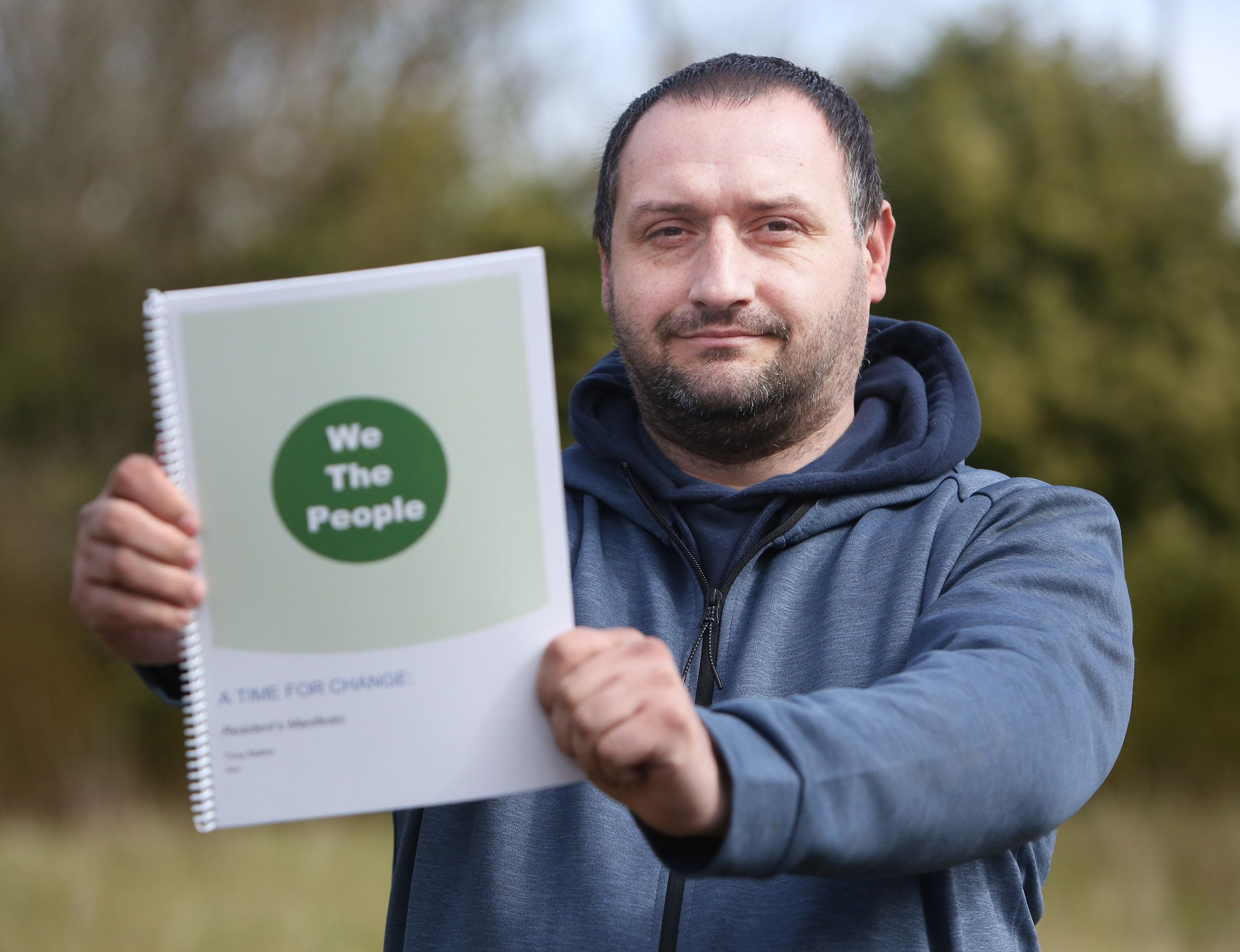 LOOKING FOR YOUR VOTE: Independent candidate Tony Mallon is standing in West Belfast

MAY'S Assembly election is a first electoral foray for independent candidate Tony Mallon, who is standing in the West Belfast constituency. His election campaign and manifesto was recently launched at the Conway Mill under the banner of ‘We the People’.

Amongst those backing Mr Mallon is Pastor Colin Houston, a former UUP candidate who was suspended – and later resigned – from the party for defending a pastor who made controversial remarks about Islam. The pair sat down with the Andersonstown News, where Mr Mallon outlined his reasons for standing in the election.

Key to Mr Mallon’s campaign is a pledge to being a “cross-community” candidate – his election posters feature both a tricolour and union flag. Shunning orthodox party politics, his manifesto centres on the creation of a new West Belfast community group, the structure of which he has created himself. However, he insists he will be a “separate entity”.

The community group, he said, will be made up of representatives of the Protestant, Catholic and Traveller communities. On BAME (Black, Asian and Minority Ethnic) representation, he said they may be represented in places like East Belfast.

Representation to the group would be dictated by the census, noting a “Catholic majority” in West Belfast.

“People that are already here need a voice and they need to be represented,” he said.

Ahead of our interview, Mr Mallon directed the Andersonstown News to his personal Facebook page where he has shared videos criticising the admittance of refugees. On immigration, he said: “We do not have enough money to spend on our own people, so our own people need to be prioritised first.”

He added: “What I’m suggesting, which is what they’ve done across the world, is have a points-based (immigration) system,” he said.

“Where there’s jobs in high demand and we don’t have enough people with the skills here, so those people come across and we welcome those with open arms.”

On education, Mr Mallon’s pledges to “do away with homework” while his manifesto includes an un-costed proposal to introduce voluntary school hours of 8am to 6pm, when children would be taught “real life skills” such as “sewing, cooking and how to pay taxes”.

“What that does, especially for women, is allow them to enter the employment market full-time,” he said. “What I’m suggesting as well is that we fund the teachers’ education, so instead of being laboured with £300 a month in student debt for ‘x’ amount of years, what we’re doing is these teachers have a social contract so they must now work for the community school for a number of years before they can move off to the private sector.”

Opposition to Coronavirus regulations are a key feature of Mr Mallon’s campaign and he is critical of government spending during pandemic.

“I’m under no illusions, the mismanagement of the last two years is going to cause a financial tsunami,” he stated. “What I’m shocked about is that our politicians have been able to spend with free will”.

He also believes the impact of Covid-19 is exaggerated.

In January 2021, the UK’s Office for National Statistics said that 8.9 per cent (4,476) of Covid-19 fatalities between March and June 2020 had no pre-existing condition. Government statistics state that there have been in excess of 180,000 Covid-19-related deaths in the UK.

Mr Mallon also criticised the scaling back of essential surgeries and health provisions during the pandemic.

“We are going to kill a lot more people long term, we have destroyed people’s lives, families have broken up over it, domestic violence went through the roof,” he said of Coronavirus measures.

He criticised the DUP and Sinn Féin for a reduction in hospital beds.

“We do not close a society down because we don’t have enough hospital beds,” he said. “We open up more hospital beds to deal with the pandemic.

“We don’t close society down.”

On underfunding of the NHS, he spoke of £300million in unspent Stormont funding that cannot be used due to the DUP’s collapse of the Executive.

“There were funds made available for injecting people, that money could have been better spent treating sick people instead of giving people vaccines,” he said. “The original vaccine was made for the original Covid-19 virus,” he added.

“It has evolved numerous times since then. It has been proven that it becomes less and less effective.”

Researchers and medical experts – including those at Imperial College London – suggest that, while vaccines are less effective against newer variants, they still offer significant protection, particularly against severe illness.

He said this does not extend to racist remarks or remarks that incite violence.

Asked if derogatory or harmful remarks about particular sections of the community should be allowed, he said: “People’s right to have an opinion trumps people’s right to be offended."

“I am in favour of what I call equal marriage, and I think people should be allowed to marry,” he offered as an example. “However, there are people who share a platform with me that don’t and they come from the religious community, and I’ll defend their right to think that way.”

A “pro-life” candidate, he also hit out at Stormont politicians who voted to ban protests outside sexual health clinics.

“For me that’s absolutely disgusting,” he stated.

He added: “The woke left-wing agenda has gone far too far in my opinion”.