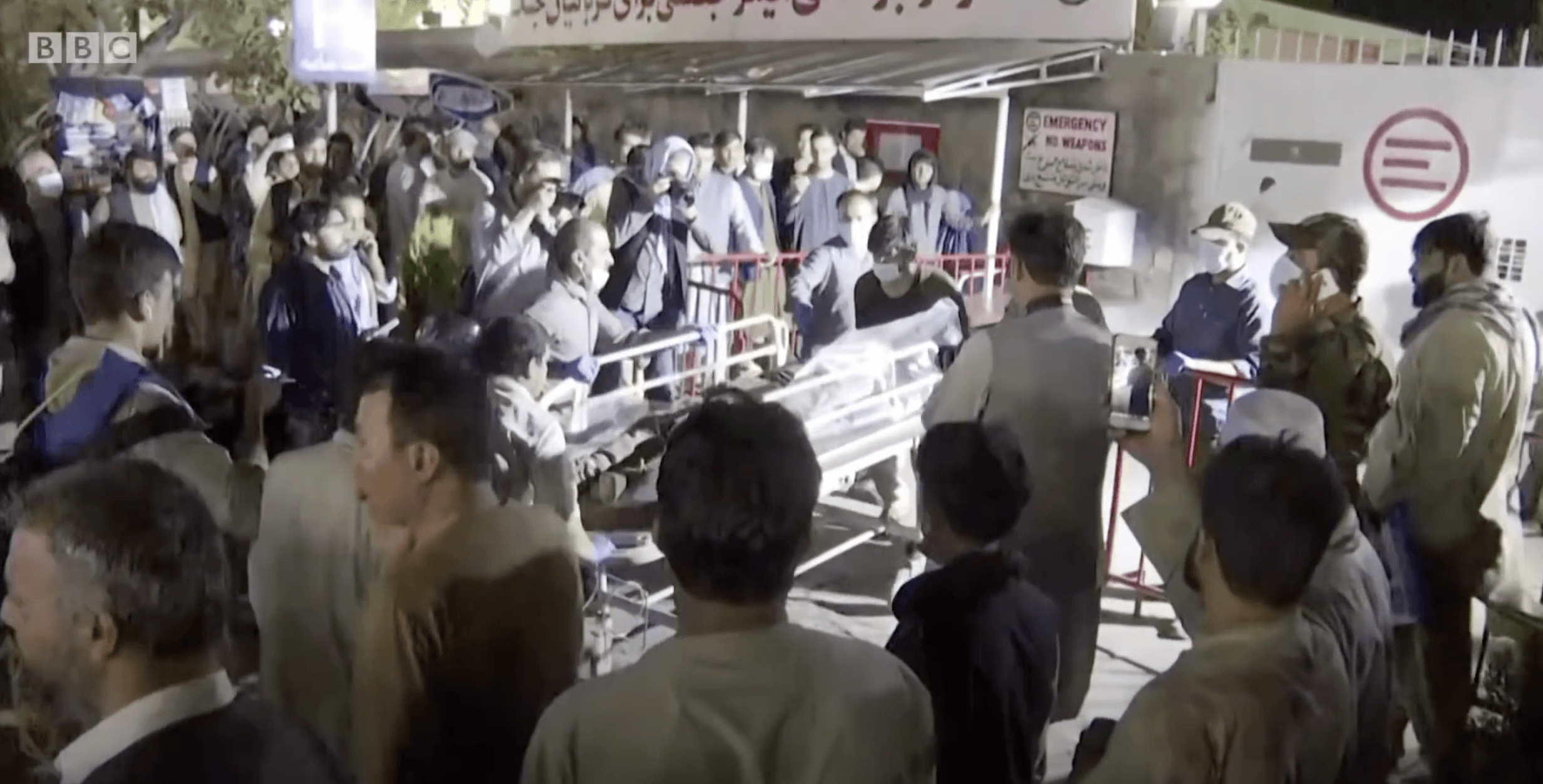 SLAUGHTER: Those injured in the suicide bombing at Kabul Airport are rushed to hospital

SUMMER s a time for catching up on reading some of the books which have been patiently waiting to be opened.

‘Inglorious Empire’ by Shashi Tharoor is one such. It is particularly relevant as the current crisis in Afghanistan unfolds amid the chaotic and shambolic disengagement of the British and the USA from a country they should never have invaded.

It is a story of empire and colonialism and of its legacy as told through the experience of India. It is a scathing indictment of British rule in that region – an India which up to 1947 included Bangladesh and Pakistan. That year Britain, as in Ireland just three decades earlier, imposed an arbitrary partition of the sub-continent. Between one and two million died in the conflict that followed and many millions more were uprooted from their homes.

Inglorious Empire is a detailed and devastating critique of British policy in India and of its impact on the people who live there. It’s a lengthy, well written at times moving account of a people robbed of their livelihood by an amoral imperialist regime.

Tharoor begins his examination of the impact of Britain’s Imperial policies in India with a quote from a young American historian, Will Durant, who visited the country in 1930. Durant summed up in one short paragraph the Indian experience to that point: “The British conquest of India was the invasion and destruction of a high civilisation by a trading company (the British East India Company) utterly without scruple or principle, careless of art and greedy of gain, overrunning with fire and sword a country temporarily disordered and helpless, bribing and murdering, annexing and stealing, and beginning that career of illegal and ‘legal’ plunder which has now [1930] gone on ruthlessly for one hundred and seventy three years.”

At the beginning of the eighteenth century the economy of India was as large as that of all of the European states put together at that time. India held a 23 per cent share of the world economy. When the British left in 1947 that had been reduced to just over three per cent. Tharoor explains it thus: “The reason was simple: India was governed for the benefit of Britain. Britain’s rise for 200 years was financed by its depredations in India.”

In measures not unlike those employed to undermine Irish commerce in the eighteenth century, Indian industry, trade, shipping and shipbuilding were effectively destroyed. Before the British came to India it had a thriving trade and shipbuilding industry. In the early 17th century, the Bengal fleet alone included between four and five thousand ships between 400 and 500 tonnes each. To weaken the competition the British ship owners were given a monopoly on trade routes. Taxes were imposed on Indian ships, forcing many out of business.

During the Napoleonic War many British ships were sunk. The British government was forced to employ foreign vessels. Indian shipping was commandeered and British and Indian sailors were reclassified as British sailors “allowing them access to British trade routes.”

When the war ended the law was amended again to exclude Indian shipping and the industry collapsed.

At the outset of the First World War the British government promised to implement self-rule or dominion status for India in return for its support during the war. The numbers of Indian soldiers involved in that conflict is staggering. Just over one million two hundred thousand Indian soldiers fought in the different theatres of war between 1914 and 1918. It is estimated that almost 75,000 were killed and tens of thousands wounded.

Similar commitments for Irish Home Rule were made by the British to Irish politicians who, like John Redmond, supported the British war effort. And like Redmond, the British betrayed India. Not only did it fail to provide for dominion status it “passed the repressive Rowlatt Act in 1919, re-imposing upon India all the wartime restrictions on freedom of speech and assembly... vested the viceroy’s government with extraordinary powers to quell ‘sedition’.” These measures included censorship of the press, internment, secret trials and no right to appeal.

The British suppressed protests ruthlessly. In April 1919 the people of Amritsar protested against the Rowlatt Act. The British Brigadier General in control, Reginald Dyer (an Irishman), imposed restrictions on public movement.

On April 9 a religious festival took place in the Jallianwala Bagh, a popular enclosed garden with only five narrow passageways providing access. Several thousands were attending.

Dyer took soldiers armed with machine guns and rifles and without warning opened fire on peaceful crowds. At least 379 were killed with, according to Dyer, barely a bullet wasted. He ordered his soldiers to give no aid to the wounded and imposed a 24-hour curfew which prevented relatives or friends attending to the wounded lying in the streets.

Tharoor describes events in Amritsar: “The Jallianwala Bagh massacre was no act of insane frenzy but a conscious, deliberate imposition of colonial will.”

Like Bloody Sunday in our own time, Amritsar emboldened Indian resistance to British rule and increased the demand for independence. Like Widgery, the official commission of enquiry largely whitewashed Dyer’s conduct.

Shashi Tharoor’s book is a powerful account of the evil of imperialism and colonialism. As we watch events unfold in Afghanistan, which has been a frequent victim in the past of western imperialism, it is worth remembering that the policies being pursued today in many parts of the world by western powers continue to have their roots in the racist, imperialist legacy of empire and colonialism.

What's in a nickname?

When I was at primary school my nickname was Addies. It didn’t last beyond Saint Finian’s for some reason.

My brothers, or at least some of them, had the same moniker. I don’t know about the girls, but years later I discovered our Gearóid’s old school books had Addies scribbled on them.  Different generation. Same nickname. In our class in Saint Finian’s we had Spud Murphy, Guts Garland and other nomenclatures. The surname Burns was usually changed to Burnsie.

In prison nicknames were common. Cleaky, Floorboards,  Honkytonks, The Dosser, Jack the Giant, Rigor Mortis, Shoulders, Ted the Red, Dickiemints and so on. The origin of some of these nicknames is amusing. For example Floorboard’s surname was Rafter. He was a great friend of mine. Rigor Mortis spent a lot of time stretched out on his bunk. He also was a good friend. I wonder where Swinger or Jock McBride or Goose or Cheeser’s nicknames came from.

This week I discovered a thread on Twitter on the subject of nicknames. @rockapotomus82 – it also is very amusing. Here are some funny examples.

There is a lad called Chilli because his da’s name is Con Carney. Another by the name of Mickey McBride is nicknamed Mickey McNoBride because his wife left him. An unfortunate chap called Shea Cox is nicknamed Six Mickeys.

In Fermanagh a money changer called Moss gets called Sterling Moss. Enda May is nicknamed June. The son of fellow nicknamed The Lord goes by the name of the Baby Jesus. WD40 got his nickname because his da is called Rusty. A chap whose surname is Nitim gets called Needles. And finally, one of my favourites is the lad called Miss Ireland because he did a parachute jump and landed in the sea.

Eilish Rooney very kindly sent us her Ballymurphy Poems. Eilish is one of the stalwarts of our community and educational sectors. An active citizen in every sense and a wonderful poet.

Eilish’s language is straightforward, restrained and measured, but evocative and powerful, every word weighted and commanding. It is a dignified testimony, as she intended I am sure, to human resilience and courage. It is also an indictment of hypocrisy, brutality, double dealing, indifference and cruelty.

While Eilish is no doubt too modest to see the comparison, I believe her Ballymurphy Poems is on par with Thomas Kinsella’s ‘Butcher’s Dozen. It is also fitting that this collection of poems by a daughter of Ballymurphy is one of the responses to the injustice inflicted on our neighbours by a cowardly and brutal regime. Father Des would approve. I will leave you with Eilish’s opening verse.

Internment.
“Some long forgotten military planner called it Operation Demetrius in honour of the warrior King of Macedonia who, it was said, ‘conquered but never ruled’.”
(James V. Burke, Demetrius Lives on in Ireland, New York Times, March, 1983.)
In Laganside Courthouse, courtroom twelve,
Military witnesses often refer
to ‘Operation Demetrius’.
Families facing them look and listen.
They have waited a long time to see and hear
The men in charge tell what happened that day and why,
Who ordered the shooting?
In their evidence, the long forgotten
Military planner is called to mind
And forgotten in one and the same breath.
Much as the river is remembered at the courthouse
Far from its ancient origins, Abhainn an Lagáin.
Far as Ballymurphy is from Macedonia
Where Demetrius made a name for himself.

• I normally try to keep my private life private. But let me make this small exception. Colette and I were married fifty years ago this week. Fifty years! That’s some achievement. For both Colette and me. Well done to the two of us.  Xox.