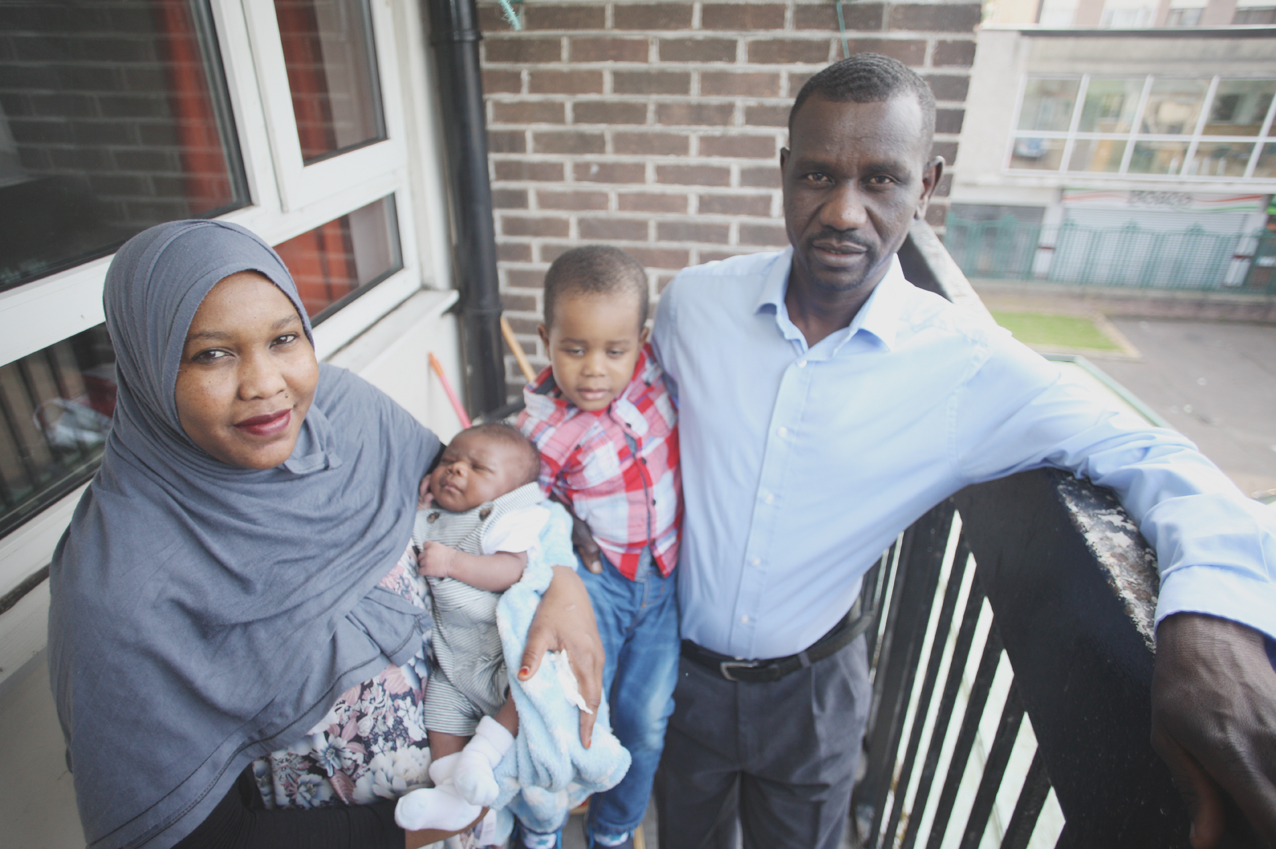 STRANDED: Mohammed Idris with his wife Darelsalaam Yaquob and children Anan (2) and Azam (3 months), they also have a 9-year old son, Alaa; the family continue to live in a cramped two-bedroom flat three years after a racist attack

A SUDANESE family of five forced to flee their North Belfast home after a racist attack remain stuck in a cramped New Lodge flat three years on.

The family, who fled the conflict in their native Sudan in 2012, were forced to leave their Tigers Bay home in August 2014 following the racist attack.

The Idris family have welcomed two additions to the family in their flat and father Mohammed says they feel let down by the Housing Executive.

“We feel very depressed and that we have been let down by the Housing Executive,” he said. “We did not receive any intimidation points. They say our case was ‘harassment’ and not a serious case. My children are not happy. There is not enough space for them to play and as a father I feel helpless, but there is nothing I can do.

“Since we have moved here, we have not received a serious offer in an area suitable for our needs.

“My eldest son goes to St Patrick’s Primary School in the New Lodge and he is very happy there. We do not want to move away from this area.

“We also applied for a three-bedroom house in a new development on the Limestone Road, but we were told we did not have 200 points to compete.

The family have been supported by housing rights group Participation and the Practice of Rights (PPR) and their ‘Equality Can’t Wait/Build Homes Now’ campaign in North Belfast.

The Idris family are now seeking legal advice having exhausted the Housing Executive complaints process for the second time as the housing body continues to withhold intimidation points from them.

A spokesperson for the Housing Executive said: “We are working closely with this family and have been since 2014.

“In this case, the Housing Executive carried out a detailed investigation which decided that the threshold for intimidation points – under the rules of the Housing Selection Scheme – was not met as the applicant’s home was not destroyed or seriously damaged, nor was the family at serious and imminent risk of being killed or seriously injured.

“However, we did award extra housing points to this family for Primary Social Needs (fear of violence).

“They remain in temporary accommodation with a high number of housing points, but their areas of choice are those of high housing demand with low housing turnover.

“Our staff have already outlined other options for accommodation – these included housing available in areas of lesser housing demand and housing options in the private rented sector – in each case, our staff were told the family were not interested in these options.

“As always, our staff will discuss their situation and provide advice and guidance at any time and if they wish to revise their areas of housing choice, we will accommodate them,” added the spokesperson.