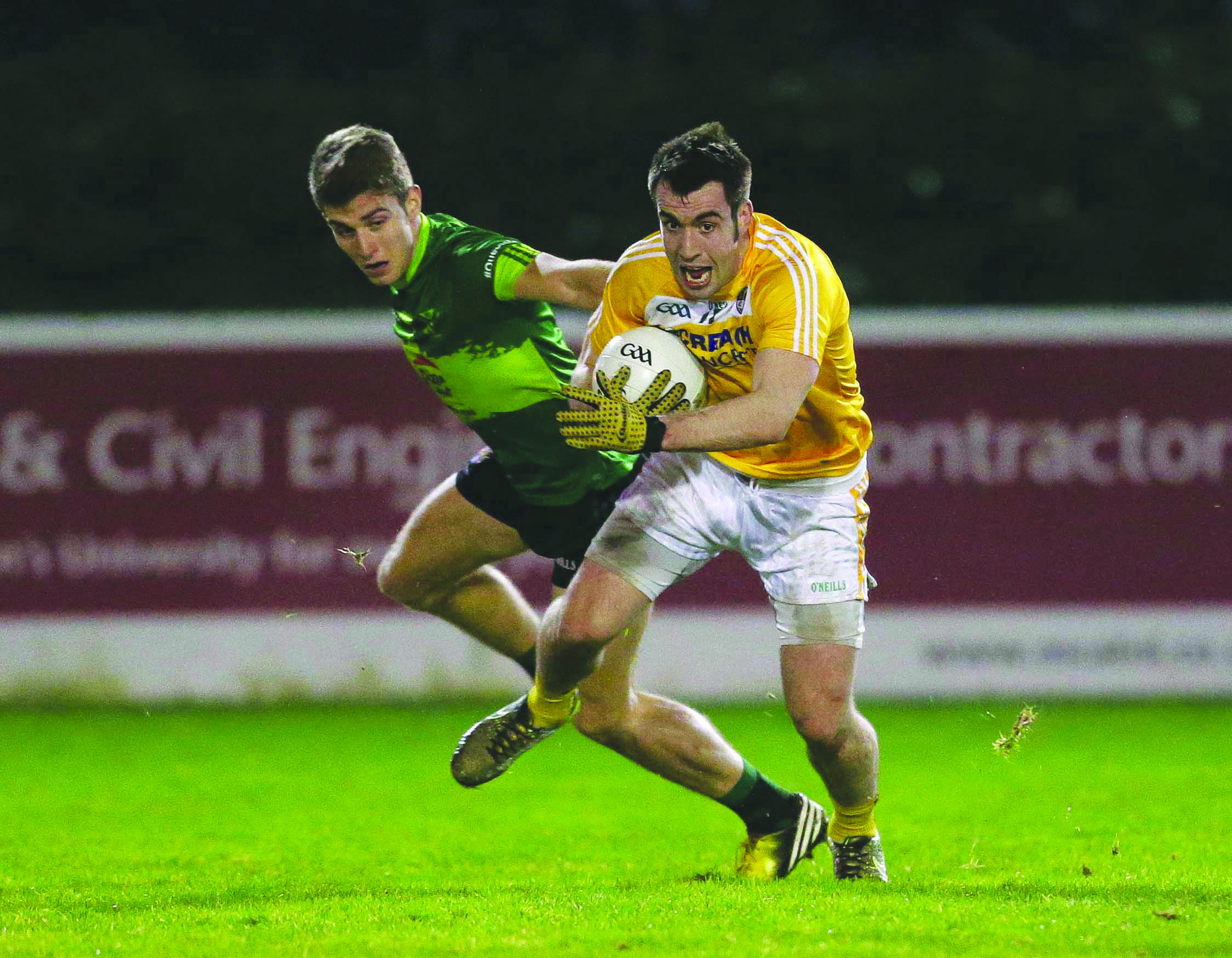 IT was a much happier Antrim management team that held their post-match debrief along the side of the field at the Queen’s Arena (Dub) last night (Wednesday) following the Saffrons’ 3-11 to 1-11 victory over QUB in the Dr McKenna Cup.

Following a heavy defeat to Derry at the weekend, Antrim fans travelled to the impressive South Belfast venue with the sense of foreboding and at half-time trailing by three, things didn’t look good.

However, a fantastic second half display when Antrim out-scored the students 3-6 to 1-3 ensured the points and gave the Saffrons a fighting chance of qualification to the semi-finals when they travel to face Tyrone next Wednesday night.

“You have to be happy with a win,” said joint-manager, Frank Fitzsimons after the game as the rain began to sheet in.

“We were sluggish at times in the first half, but it was good to see the boys getting the win. That will help us an awful lot.”

Indeed, Antrim didn’t look great in the opening 35 minutes as their difficulty in breaching a packed defence came to the fore once again.

Points from in the 15th minute from Conor Murray and Kevin Niblock proved to be their only scores from play in the opening half, but backed by a strong wind they were vastly improved after the break and cracked home three brilliant goals, the pick coming in injury-time from Brian ‘Bam’ Neeson who utilised his soccer skills to chip Jonathan Denney.

It was also a night when Sean Burke returned to county colours after a hiatus of four years although the St Gall’s man hobbled off at the end of the opening period to be replaced by Neeson.

Again, the returning Michael McCann and Kevin Niblock had great games, as did Conor Murray although the Lámh Dhearg man blotted his copybook by getting sent off in injury time. There were no real signs of the lethargy that plagued Sunday’s defeat in Owenbeg, but Fitzsimons explained why his side may have looked sluggish in their McKenna Cup opener and much more mobile last night.

“We have been training very hard. On Sunday, yes we looked very heavy legged and it took us a while to get going, but tonight I thought we were very good,” he agreed.

“Our defensive play was very good too. OK, there were a few wee mistakes there like the ball that went over Ronan’s head (for the goal), but he will learn from that. There were a lot of other young lads out there tonight too and it was great to see the like of Mick (McCann) and ‘Nibs’ (Kevin Niblock) playing well there too – then ‘Bam’…..

“We were down to the bare 20 men tonight as we had a few wee injuries that crept in. That meant a few wee silly mistakes crept in when the pressure was on, but I think we are going in the right direction.”

That direction is toward Omagh for their final Group A game next Wednesday (8pm) where Antrim will be hoping to score a good win over the Red Hands to try and seal a semi-final berth.

That picture will become a little clearer on Sunday when Derry host Tyrone. Should the result not go in Antrim’s favour, it will not be the end of the world as the most important game in January will be their league opener in Carlow on January 31 and Fitzsimons says these games are all about performance and having a look at players.

“We said at the start of this competition that it’s performances that we are looking for,” he stressed.

“We have said all along that we are missing a lot of boys to the universities at the minute, with the 22 or 23 we have now, you couldn’t ask anymore of them especially tonight. It wasn’t a great night for football there, but it was a great game I thought.”