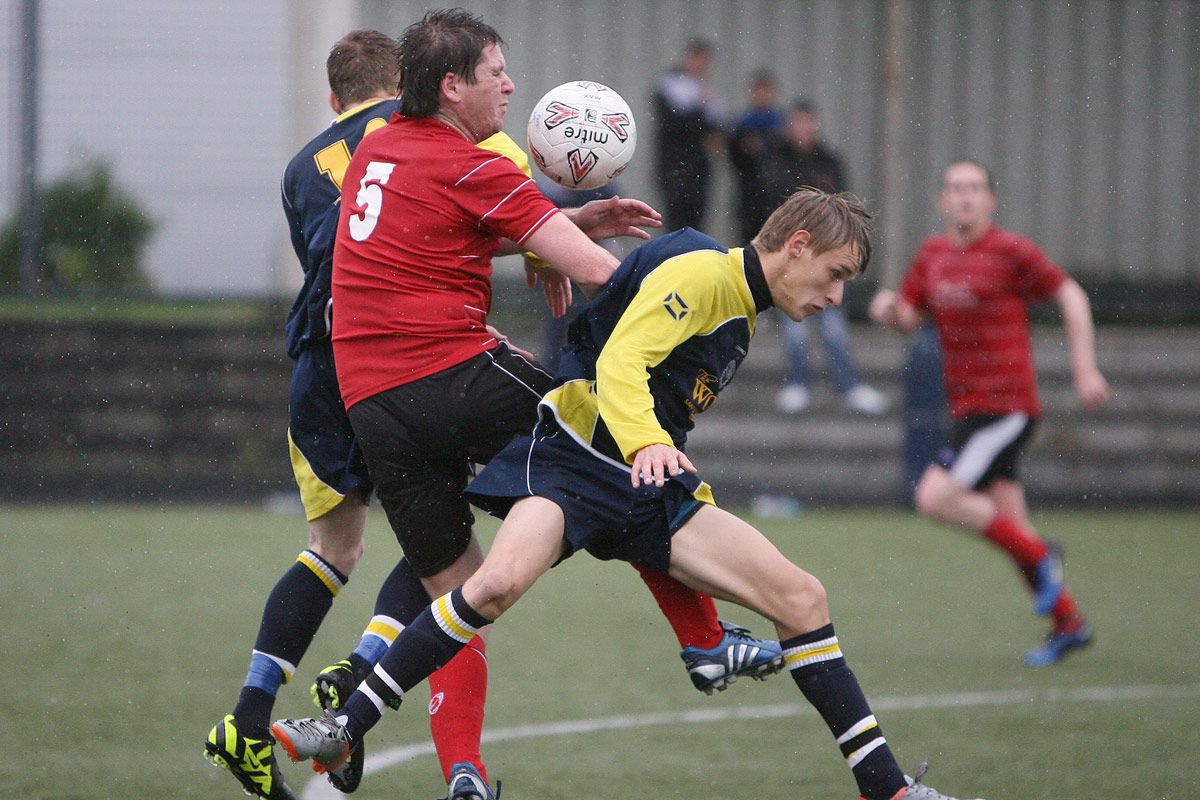 St Patrick’s YM continued their winning start to the season with this victory in the Junior Shield game at Olympia.Last year’s beaten finalists were expected to win but they didn’t have it all their own way especially at the start.

In fact FC Antrim began the brighter and took the lead when their forward neatly lobbed Paul Fisher in the St Pat’s goal to score.

Aiden Mulvenna missed a good opportunity to equalise following good work by Owen Costello and Raymond Spotswood but within seven minutes of the FC Antrim goal, St Pat’s did get the leveller.

Ciaran McManus threaded a pass through to Spotswood who flicked the ball on for Seamus McDonnell to send a crisp drive into the corner of the net.

After twenty minutes St Pat’s took the lead when good play between Joe Thompson and Spotswood enabled McDonnell to score his second.

The FC Antrim goalkeeper then denied McDonnell another goal but two minutes before half time the nippy St Pat’s forward was brought down in the penalty area and he made no mistake from the spot kick to complete his hat-trick.

In the dying minutes of the half the visitors’ goalkeeper saved again from McDonnell and a McManus shot went just over the top.

At the start of the second half St Pat’s continued where they had left off and Costello hit the post while both Robbie O’Neill and Marty Jones came close to adding to St Pat’s lead.

On 65 minutes though, it did become 4-1 when Aiden Mulvenna released Mark Stevenson down the right and his cross was cleverly back heeled into the net by Jones.

St Pat’s then became complacent and Costello did well to head a goal bound shot clear but within seconds an FC Antrim forward went down under a soft challenge by goalkeeper Fisher and the visitors tucked the resulting penalty away to make it 4-2.

Two minutes before the end St Pat’s made it 5-2 when Keith Mulvenna fed Spotswood and the winger superbly beat three defenders before crossing for Jones to tap the ball home.

St Pat’s have no fixture this weekend but the following week they make the long journey to play NFC Kesh in the Junior Cup.

St Patrick’s YM II did well to maintain their 100 per cent start to the season with this victory over a strong First Bangor team.

St Pat’s were the better side but had to wait until the last five minutes of the game before they could turn their superiority into goals.

Both goals were well executed with William Johnston cleverly lobbing the goalkeeper to make it 1-0 before Stephen Smith cut in from the left and curled a superb shot into the corner of the net for the second.

This weekend St Pat’s II are in league action again when they take on Groomsport II at Olympia.