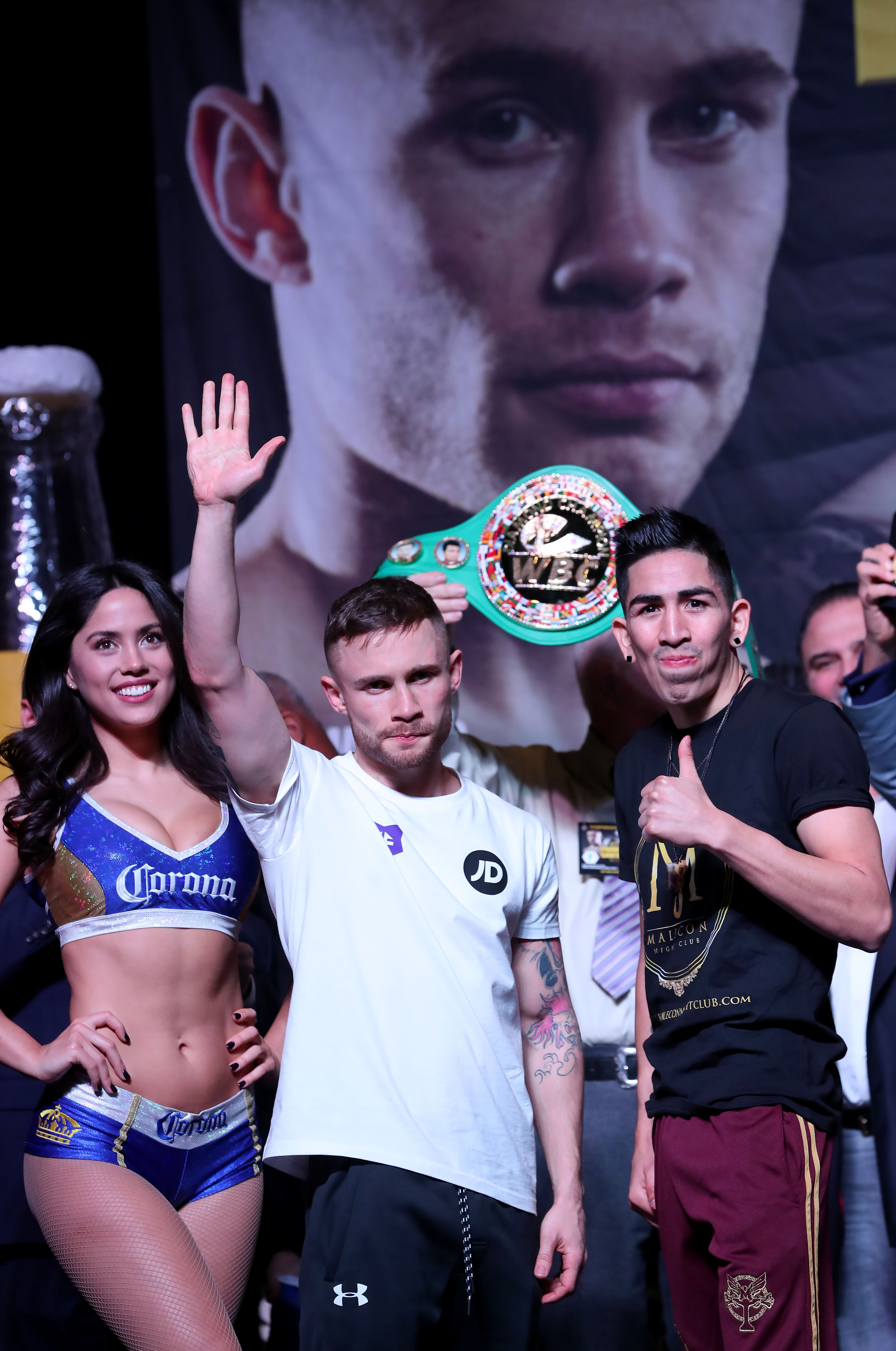 THE MGM Grand Garden Arena will feel like a little corner of Belfast tonight when Carl Frampton defends his WBA featherweight title against Leo Santa Cruz.
You could have been forgiven for thinking you were in the Odyssey Arena at yesterday's weigh-in with the thousands of travelling Frampton fans creating a racket and the atmosphere will be ramped up again at around 8pm local time when both men make their way to the ring for this eagerly anticipated rematch.
The cries of 'Frampton's on fire, Santa Cruz is terrified' rang around the arena along with a rendition of Sweet Caroline', the unofficial anthem before the two boxers took to the scales with both weighing in at 125lbs, one pound under the featherweight limit of nine stone.
Frampton has been his usual, relaxed self as he soaked up the atmosphere created by his fans who have been doing some soaking up themselves in the bars and casinos.
It is a huge stage, the biggest of them all to be headlining at such an iconic venue and the North Belfast man says he is ready to deliver another big performance against his Mexican rival.
"I'm in the fight capital of the world in the arena where all the big fights happen,” he said.
“It’s a huge deal for me, this is a box ticked. There’s not many guys from my part of the world get to top a bill at the MGM and in recent times not many guys in this weight division that get to top a bill here so me and Leo are in a lucky position where we’re able to do that as featherweights.
“It’s exciting and I can’t wait to get going. I can’t wait until fight night.”
For his part, Santa Cruz is also looking forward to fight night as he vies to reclaim the title he lost to Frampton in New York last summer.
The affable 28 year-old will be boxing in the MGM for the seventh time tonight, but topping the bill is a first for him and he says is proud to be in such a position.
"I'm very happy to be here and I'm excited to be the main event here at the MGM. It's a dream come true," he explained.
"Since I was a little kid, I've always dreamed of it. I always thought 'hopefully one day', but I never imagined it. Only the great fighters fight here and for me to come here and fight as the main event is an honour.
"After the first fight when I got out of the ring, the only thing in my head was the rematch to get my belt back and get revenge. We have worked really hard.
"Carl Frampton is a great fighter and I know this is going to be another tough fight, but we are going to try and do what we can and even if it's only by one or two points, we are going to get the win."
In the build-up, Santa Cruz has suggested he will use his height and reach more in order to bank the rounds and nullify Frampton's movement. This would be a sea change from his usual, come-forward aggressive style that contributed to a classic between the pair first time out and he he predicts Frampton will try to prevent this match-up from turning into a war.
"I want to make it a great fight for the fans and go toe-to-toe with them (opponents)," he added.
"Carl Frampton, I don't think he is going to want to stand and fight with me, I think he is going to move. In the first fight he made the mistake of staying there and fighting with me at times, so this time I expect him to move and run more.
"I'm going to go out there and be smart, so what I have to do to win the fight. I always think of the fans and try to give great fights, but this time we're going to be smart and go out there to get the win."
Frampton has not been for taking the bait however and says he is ready for whatever Santa Cruz produces on the night.
“I’m just going to do whatever I have to do to win the fight," countered when Santa Cruz's claims were put to him.
“If I’m clever I can make this a much more convincing win in my favour. But there are going to be times in this fight when I’m going to have to bite down on the gumshield and fire back and that’s what makes it exciting.
“He’s talking about using his reach but I don’t know because although he’s got a greater reach than me, I’ve never seen him use it really.
“He always fights close, in the pockets but we’ll see. Whatever he has I believe I can adapt to it and I’ll be able to do enough to get the win.
"I think he’s going to come in even more prepared this time so I’m expecting a very difficult night."
After the first fight, Santa Cruz suggested the vastly pro-Frampton crowd may have helped swing some of the closer rounds to the Belfast man, but despite this rematch taking place much closer to his home in Los Angeles, the huge travelling support will likely make it feel like a home fight for Frampton yet again and 'The Jackal' agrees that he will be the fans' favourite tonight.
"We’re bringing even more traveling support and I will have most of the fans in the arena," he predicts.
"It could be pretty even but we’re expecting 4,000 and 4,000 from back home will sound like 8,000 and they’ll make the arena their own.
“I’m confident that we will all go home celebrating.”