Frampton content to wait for chance to create history 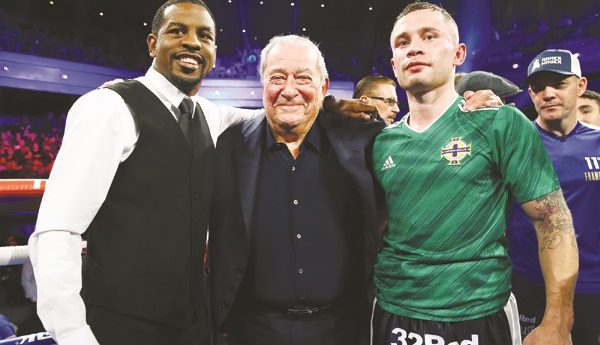 Carl Frampton was due to challenge WBO super-featherweight champion Jamel Herring in Belfast in June, but says he would be happy to travel to New York for the fight if it is possible at the end of the year

WHILE his ambition of becoming a three-weight world champion has been put on hold, Carl Frampton insists on looking at the bigger picture.

Back in early March, it was a matter of when, not if, his June 13 challenge for Jamel Herring’s WBO super-featherweight title fight would be officially announced, but the surge of Covid-19 here put paid to those plans.

‘The Jackal’ required surgery and an extended break having fractured both hands in his points win over Tyler McCreary in Las Vegas on November 30, but was recovered and ready to get back into camp ahead of a showdown with the American.

While that fight remains on the table, it is impossible to predict just when it will be viable, but the North Belfast man refuses to curse his luck and instead, takes a pragmatic view.

“It’s no more frustrating for me than anyone else - everyone’s in the same boat,” said the 33-year-old who is bidding to become Ireland’s first-ever three-weight champ.

“I can’t complain too much because it’s just the way it is and we just have to try to get on with it.

“I was supposed to have a fight with Jamel Herring and hopefully, it will happen at some point, but at this stage, it doesn’t look like it will anytime soon.”

When the restrictions are eased, the return of sport and mass gatherings will still be quite some time off.

For boxers, especially, it will still take some time to fully prepare for a fight with sparring partners tougher to source given the worldwide pandemic.

“You have that, but it’s when mass gatherings can take place is the real issue, more so than people training for a fight and I think that’s a lot longer off,” he stressed.

“Just say lockdown ends tomorrow and we have eight weeks to train - I still don’t see mass gatherings taking place for a number of months and that’s a long time away.

“If I fight this side of 2020 I’d be happy with that and I’ve said that for a long time because I want to be realistic. Some people are saying about the end of August for fights but I just don’t see that being plausible.”

There have been murmurs of some form of boxing returning behind closed doors in mid-to-late summer, but nothing can happen without restrictions being lifted by the British Boxing Board of Control who will weigh up the options.

Boxing is a business and the gate receipts major stars can generate would simply not be appealing to any promoter who would rather they boxed in front of big, packed arenas, so it is highly unlikely that Frampton or any other major ticket-seller would find themselves boxing in such an environment.

“I’d doubt it will happen, but if you’re getting told that’s the option to get a fight behind closed doors, you’d have to take it,” he accepts.

“I’d like to think that a promoter would look at the tickets I can generate at the gate would mean they’d rather not because they would want to make money themselves.

“I’m not comparing myself to Anthony Joshua at all, but could you see a fighter of that magnitude going behind closed doors?”

While he is limited to what training he can do at home, Frampton feels he is in good physical shape and has been in contact with his trainer, Jamie Moore, regarding certain punches to work on that are tailored to a fight against a bigger man in Herring.

When restrictions are lifted and he can travel to Manchester to fully start camp with Moore he will be ready but accepts that is when the real work begins ahead of a proposed fight against ‘Semper Fi’.

“I’m just maintaining fitness so that I can hit the ground running,” he reports.

“I’m reasonably fit at the minute: hitting the bag, running, cycling a lot and things like that so I’m in reasonable shape.

“I’ve been chatting to Jamie and hitting the bag in the garage, there are certain shots I’ve been working on we feel would work against Jamel Herring who I’m hoping is still the next opponent but that may not even be the case.

“I’m lucky I have a set-up in my house where I can do weights and hit the bag but it’s still not great preparation for anyone.”

The dream was to challenge Herring at Windsor Park this summer and it seemed that was on the cards, but with the fight now unlikely until the end of the year at the very earliest, outdoors in Belfast is simply a non-runner.

Top Rank CEO Bob Arum, who promotes Herring and co-promotes Frampton with Frank Warren, recently suggested that Belfast’s SSE Arena could come into play, but Madison Square Garden in New York appears to be the front-runner and the opportunity to return to The Big Apple - where he dethroned Leo Santa Cruz at Brooklyn’s Barclays Centre in 2016 to take the featherweight crown - is now his preferred option.

“That would be the one for me if I’m being honest,” he confirmed.

“Windsor was my first choice but obviously that will be ruled out, so Madison Square Garden would be my second.

“There are not many places you could say Madison Square Garden would be second place to, but I’d take that over the SSE just to have the chance to create history there.

“It would be great to create history anywhere, but to do in the ‘Mecca of Boxing’ - a place I haven’t boxed before and I’ve been lucky to box in some huge places - would be another box ticked.”