Frampton predicting an explosive performance on his field of dreams 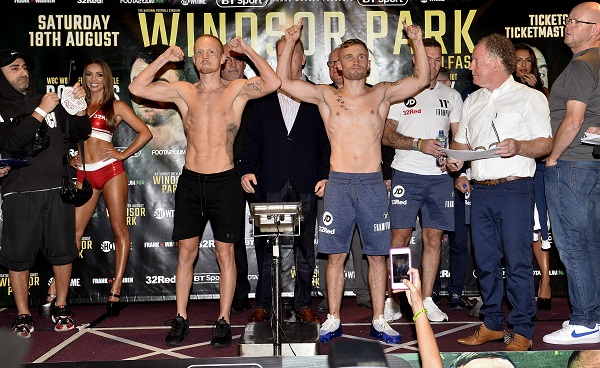 Carl Frampton and Luke Jackson have both made the featherweight limit ahead of their Windsor Park showdown tomorrow night Mandatory Credit: Stephen Hamilton -Presseye

WHEN he looks back on his career in later years, Carl Frampton insists tomorrow night’s Windsor Park showdown with Luke Jackson will be at the forefront of his mind (approx. 9.45pm, live on BT Sport).

At today’s weigh-in at the Europa Hotel, Frampton scaled 126lbs having stripped completely and Jackson 114.12lbs ahead of their interim WBO featherweight title fight tomorrow in front of a sold-out crowd of 24,000.

While Frampton’s resume includes wins over some big names in the sport including Leo Santa Cruz and Scott Quigg in some of the more iconic venues in the world, ‘The Jackal’ says topping the bill at his beloved Windsor Park is bigger than anything he will have done in the sport.

“These are all things you can talk about and reminisce about when you’re an old man, but this is going to be the one I’m going to talk about more than beating Santa Cruz in New York even or beating Quigg in a unification in Manchester,” he said.

“Beating Luke Jackson is the one I will have the fondest memories of.”

Of course, victory tomorrow opens the door for an expected world title challenge to IBF holder, Josh Warrington later in the year, but the 31 year-old Tigers Bay man is not taking Jackson lightly.

His stats in the gym back up this claim and while he impressed last time out against Nonito Donaire, Frampton predicts he will be better again tomorrow night.

“I’m always confident going into every fight, but I’ve prepared brilliantly for this,” he reported.

“The statistics we have been getting back from the (Manchester Sports) Institute where I train at are saying I’m in better shape than I was against Donaire.

“I felt on top of the world then, so I think this is going to be a big performance, I genuinely do.

“Luke seems to be a nice guy, a respectful guy, but on the night it’s about me putting in a performance and doing the business. I think I will.”

Jackson, from Hobart in Tasmania has not travelled across the globe to make up the number and while he had plenty to say in the lead up to this, his golden opportunity to make it into the big time, he was full of respect for Frampton this week.

While he will walk out into a hostile environment, some family and friends have made the trip and he believes his preparation leaves him in a good pace to spring a mammoth shock.

“At the start I thought he was overlooking me a bit, but he understands what’s at stake,” said the 33 year-old Australian.

“If he loses to me, his career is pretty much over.

We’ve trained very hard and smart in this camp, spent a lot more time with Billy Hussein (trainer) than I usually do.

“I have to fight the perfect fight and I believe I can do that.

“I’m very proud of myself to be here. To give my father, who hasn’t been out of Australia before, a reason to travel half-way across the world makes me proud.

“It will be hostile, but there’s no point in me saying ‘I’m going to do this or that’, I’ve got to do it. I have prepared mentally for different things that could happen in the fight, so we’ll see what happens on the night.”

Frampton has no intention of being caught short though and predicts he is ready to make a major statement to the champions at 126lbs.

Without a stoppage win since February 2015 against Chris Avalos, the North Belfast man feels this could be the time to break that duck, but winning is the most important factor.

“I believe I’ve got the ability to look very good here and take him out, but I can take any featherweight out if I hit them clean I have the power to do that. That includes all of the top names,” he stressed.

“I know my recent run of results, going to points hasn’t suggested that, but I can punch.

“It could be over in a round, but I’m prepared to go for 12 hard rounds if needs be.

“That’s not being disrespectful to him, that’s any featherweight in the world.

“I’ve got the pop to take him out and if I hit him clean in the first round, that could be it.”