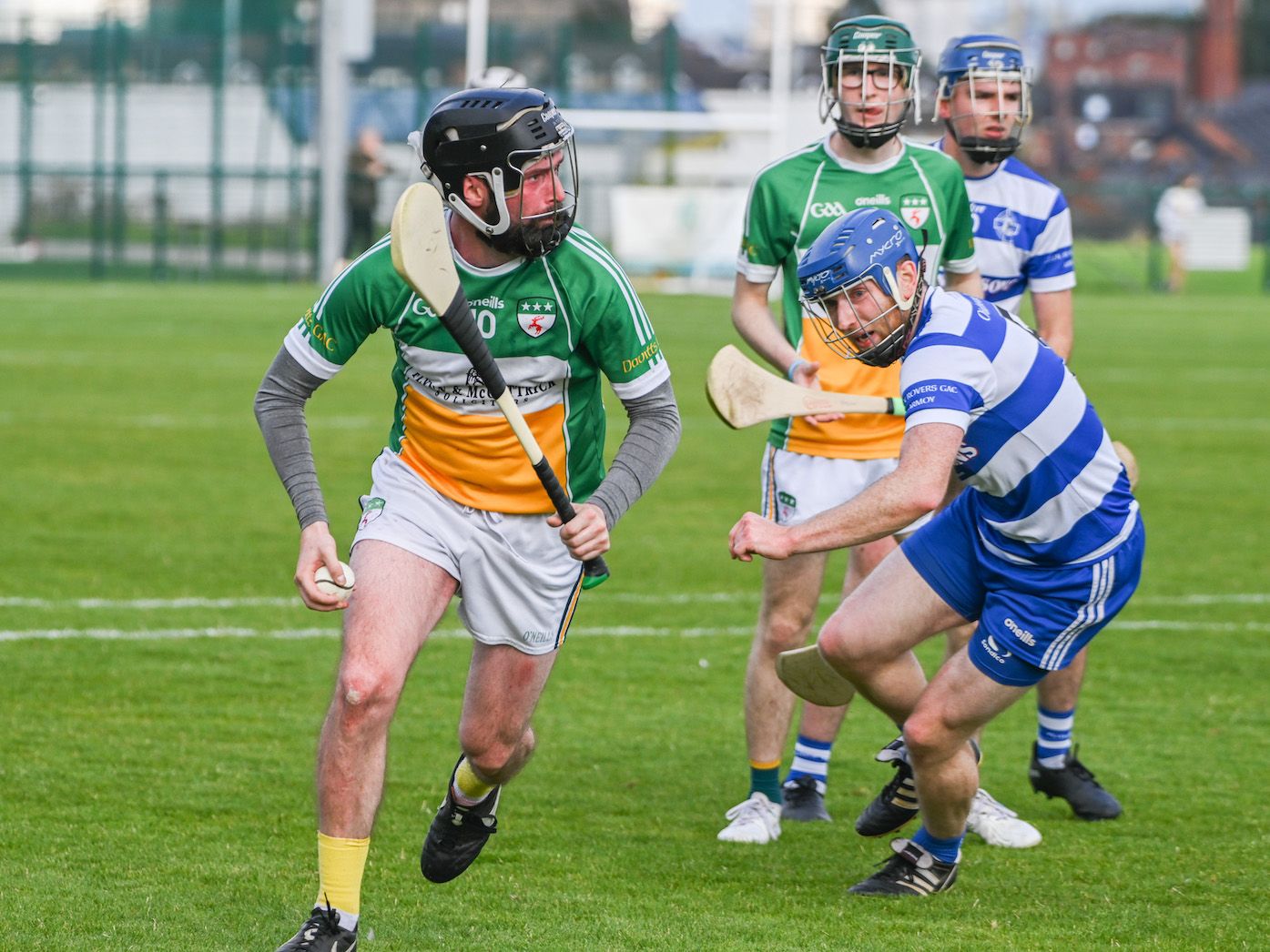 The visitors took a two-point lead into the break thanks to Tommy Burns' major on 29 minutes and further goals from Emmett McCaughan and John Dillon from a penalty put them in the driver's seat.

However, Davitt's would roar back and despite losing goalkeeper Thomas Maguire to a red card late on, they were poring forward as Armoy were forced to hang on.

Indeed, Davitt's will look back at this game as one that got away as they poured forward in waves, but their finishing would let them down in the final quarter as they created more than enough openings, but didn't take them as they came up just short on their home patch.

Yet Armoy just made the better of their moments with that goal burst crucial, but so too was their ability to pick off scores in the second period that kept them in the ascendancy and they had a better spread that would prove to be crucial as just 1-4 of the hosts' total came from play.

Don Whelan would top-score with 1-10 for the city side and all but one point came from placed balls with his opening score a free four minutes in.

Armoy sprang to life with Tommy Burns levelling immediately and then Colin Lordon sent the North Antrim men into the lead with a good point on the turn.

Whelan would reply in kind with a fine effort from play and then the excellent Marcus Toner darted inside to reestablish the lead for the hosts.

At the other end, goalkeeper Thomas Maguire made an excellent save to deny John Dillon with a Whelan free extending the gap straight after.

Turlough McBride would then chip in with back-to-back frees to level with Whelan responding with two of his own and a 65 in what was turning into a stop-start first half.

Armoy rose to the challenge as Burns fired over from deep and after McBride converted his third free of the game, Emmett McCaughan showed great touch and control to gather, spin and score to level the game once again.

Whelan knocked over another free and then PJ McBride replied immediately to level for the fifth time in the opening half, but then came a big moment on 29 minutes as a line ball was sent in and broke to Burns who this time gave Maguire no chance burying to the net.

Whelan landed a 65 in response just before the break as Armoy led by two, 1-8 to 0-9 at the change of ends.

The Glensmen would enjoy a big start to the second half and one that would ultimately prove crucial as McBride got through seconds after the restart to bat over before Emmett McCaughan flashed to the net off a break three minutes.

Moments later, Ciaran McKenna was hauled down when heading towards goal for a penalty and John Dillon cracked to the net as suddenly from a nip and tuck affair, Armoy were 3-9 to 0-9 up.

It seemed this gap would be too much for Davitt's, but they immediately began to make inroads with Whelan landing a 65 to steady the ship and then on 41 minutes they claimed a huge lifeline as Marcus Toner found some space just outside the 20-metre line and his low shot found the net despite goalkeeper Conor Devlin getting a touch.

Whelan knocked over a free and Cormac Maguire pointed on the turn from a low ball fed in and with 15 remaining the gap was down three.

After an exchange of points from McBride and Toner that gap remained but Davitt's were beginning to struggle with their finishing as the wides began to add up and Toner saw a shot come back off the post and cleared.

It appeared Armoy had finally settled the argument with McBride scampering free to point and Tommy Burns adding another before some late drama that began with Davitt's goalkeeper given his marching orders by referee Danny O'Neill for an off-the-ball tangle with Colin Lordon who was forced off injured.

After lengthy delay, the game resumed and Davitt's were right back in it as Whelan drilled a free low to the net from 25 metres, but the winning goal they needed just couldn't come despite being in a decent position on one occasion as Armoy held on to advance into a semi-final meeting with Glenarm.