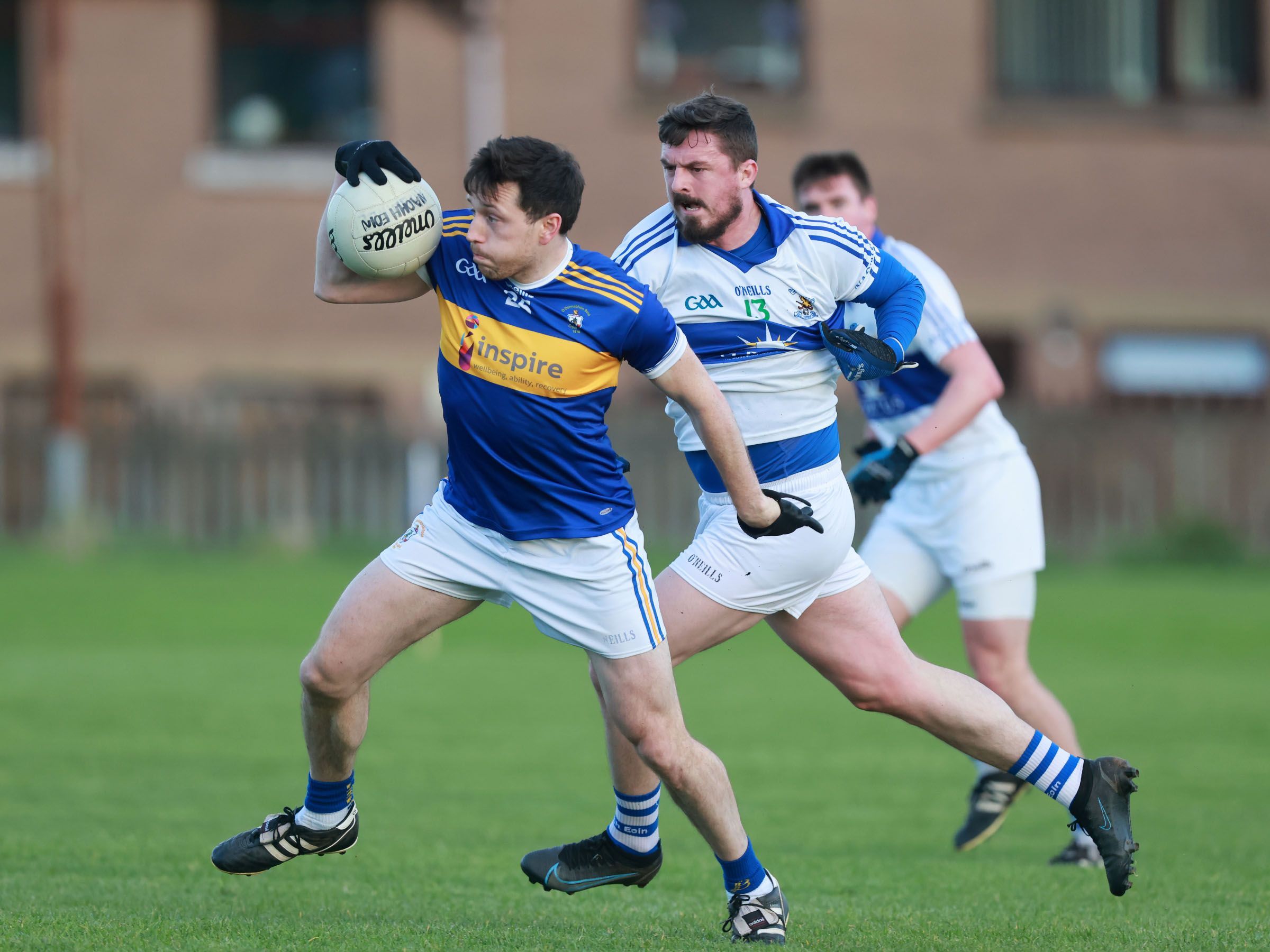 Michael Armstrong bursts past Loughlin McCurdy when Rossa overcame St John's back in April. The sides meet against at Corrigan Park on Sunday John McIlwaine

IT'S the first round of post-split fixtures in the top division on Antrim football on Sunday and there is a battle of Belfast's old rivals to get things underway in the top half.

St John's will host Rossa at Corrigan Park in a repeat of a thrilling game at Rossa Park in April that went to the hosts by one point after a fine comeback.

The Johnnies are two points adrift of their rivals heading into this game, but both will be keen to start going through the gears with the final burst of league action to come over the next few weeks with Championship time beginning to come into view.

The top of the table clash will see Creggan aiming to put a little daylight between themselves and Portglenone whom they host with just one point the margin as it stands, while Cargin are two off the top and they enjoy home advantage against Lámh Dhearg in a repeat of a game that ended in a draw on opening day.

In the bottom section, there is a cross-town meeting between St Brigid's and Naomh Éanna at Musgrave Park with the first meeting between the teams earlier in the campaign going to the Glengormley outfit.

Gort na Móna need points and fast if they are to escape from the bottom of the table, so they will aim to score what would be a vital win when Ahoghill visit, while at De La Salle Park, St Gall's host Tír na nÓg.

It's also the beginning of the post-split in Division Two and in the top half, runaway leaders Moneyglass can take a huge step towards promotion with a victory over Glenravel.

Elsewhere, there is an all-West Belfast affair at St Paul's as the hosts welcome Davitt's in a repeat of the opening fixture for both that ended in a draw.

Ardoyne are also at home with Ross Carr's side welcoming Ballymena having put together a fine run of results after a slow start to the season.

In the bottom half, St Teresa's are propping up the division but can narrow the gap on Rasharkin to one point should they get the measure of the St Mary's club on the road.
Aldergrove have a home fixture against Dunloy, while Sarsfield's host Glenavy at the Bear Pit.

Division Three is a little further down the road than the other sections and their top-half continues on Sunday with St Comgall's welcoming Pearse's, while St Patrick's, Lisburn have home advantage against St Gall's III.

There is just one bottom half game slated with St Agnes' facing Éire Óg at Woodlands, hoping to reverse the heavy defeat they suffered to their neighbours on the opening day.

There is also some hurling action on Sunday with Cushendun hosting Portaferrry in Division One, while there are three games in Division Four.