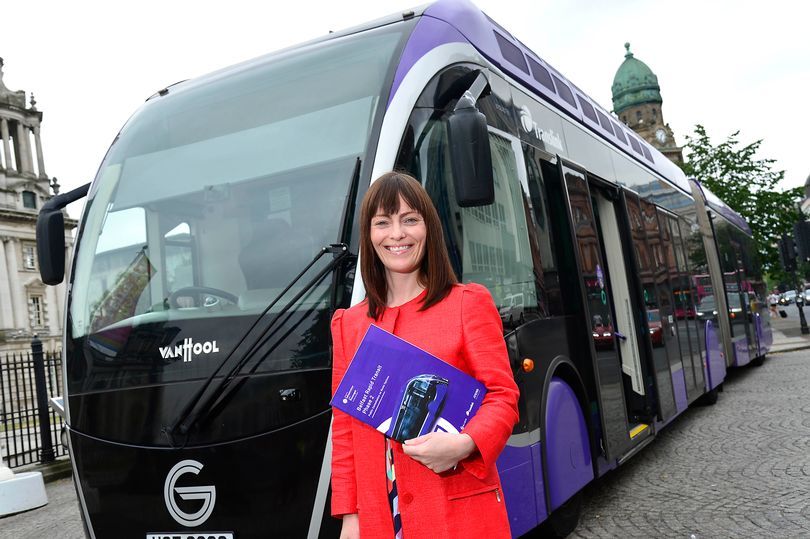 NEXT PHASE: Infrastructure Minister Nichola Mallon is to consider extending the Glider route to Carryduff.

INFRASTRUCTURE Minister Nichola Mallon is to consider including Carryduff in the proposed South Belfast Glider extension.

The Department for Infrastructure is working on phase two of the Belfast Rapid Transit scheme, which will connect North and South Belfast. The currently operational first phase takes in West and East Belfast.

The existing South Belfast Glider proposal is for the route to proceed from the city centre to Cairnshill Park and Ride via the Ormeau Road.

The move has faced opposition from residents and political reps, including Communities Minister Deirdre Hargey MLA and Matthew O'Toole MLA, who are keen for the route to continue out to the burgeoning residential area of Carryduff.

Mr O'Toole had previoiusly written to the Infrastructure Minister and SDLP colleague Nichola Mallon to request that the Glider be extended to Carryduff.

In a letter to Mr O'Toole, Ms Mallon said: "Thank you for your email regarding the route for the Glider extension and your request that consideration be given to extending the service to serve Carryduff.

"I can confirm that this proposal is currently being considered by the BRT2 project team and our transport consultants. It is my intention to publish a Public Consultation Report in due course which will include details of the consultation feedback gathered and provide responses to suggested alternative route options."

Mr O'Toole said he is "delighted" that the extension of the Glider to Carryduff is being considered.

"After writing to Infrastructure Minister Nichola Mallon MLA, I've received confirmation that the DfI are formally considering extending the Glider to Carryduff," he said.

"Carryduff is a thriving community with a growing population and is crying out for decent public transport links to Belfast."

The proposed extension of the Glider to the South and North of the city has also caused concern for retailers on the Ormeau Road, who have called on the Minister to consider  alternative routes for the service.

The report said the Department for Infrastructure only considered one South Belfast route in detail, the Ormeau Road, where small businesses have expressed concern about its impact on access and deliveries to their premises.