Glider on show at Park Centre 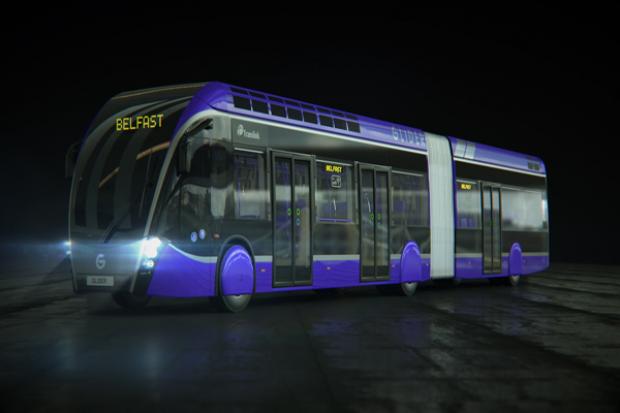 ON THE ROAD: The Glider is scheduled to become operational in September 2018

THE BELFAST Rapid Transit vehicle is arriving at the Park Centre today to allow residents to see the modern vehicles ahead of their introduction in September.
Going live across Belfast in September, Translink say the Glider will be an ‘effortless and smooth’ way to travel and will link the city up like never before, connecting east and west Belfast via the city centre, with another connection into Titanic Quarter.
The service will run from the Dunmurry Industrial Estate at McKinstry Road along the Andersonstown and Falls Road corridors to the city centre and onwards along the Upper Newtownards Road corridor to Dundonald park and ride facility.
“With a frequency of 7-8 minutes at peak times and capacity for 105 passengers, the unique style of the Glider will bring a whole new transport experience to our streets and introduce a sleek, appealing 21st Century rapid transit vehicle into the public transport network,” said a Translink spokesperson.
“As launch day approaches, Translink and the Department for Infrastructure will be holding a number of public information events across Belfast in order to introduce the service to the public. This kicks off on Friday 9 March at the Park Centre on the Donegall Road, which will give local shoppers an opportunity to board the new vehicle and find out more about the many features of this exciting new public transport service.”
A spokesperson for the Department for Infrastructure said: “Belfast Rapid Transit Glider is an innovative and ambitious project that will create a new and dynamic public transport system for Belfast. BRT will operate under the brand name Glider. BRT Glider will offer a high quality service providing people with better access to jobs, hospitals, shops, schools, colleges, and entertainment.
“Glider, the new, innovative public transport system for Belfast, will revolutionise public transport in the city.”
Team Translink will be on site at the Park Centre today between 10am and 4pm so come on down and see the Glider for yourself.