Healy hoping Antrim can bounce back against Exiles 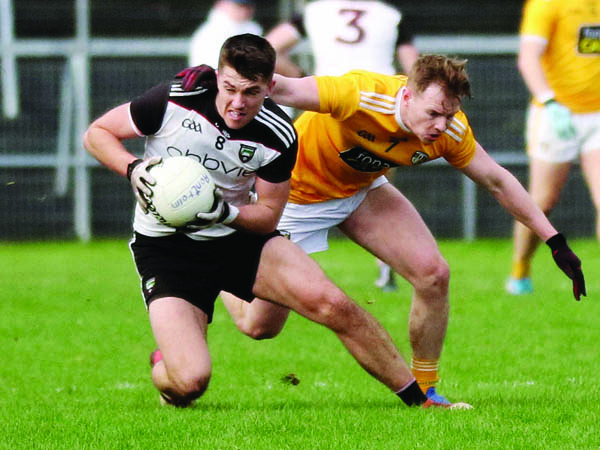 Antrim’s Peter Healy attempts to halt Sligo captain Paddy O’Connor during Sunday’s clash in Markievicz Park. The Naomh Éanna clubman feels the Saffrons must win their remaining five league games to give themselves a fighting chance of gaining promotion from Division Four

ANTRIM have been around the block enough times to know that promotion from Division Four won’t be straight-forward, but Peter Healy insists they have to try and win their remaining games.

Having defeated Wexford by six points in Glenavy in round one, Lenny Harbinson’s men fell to a one-point loss in Sligo on Sunday.
It might be early days in the league, but the Naomh Éanna defender insists there is little room for error ahead of Sunday’s clash with London at Ruislip.

“We knew we were well in the game the whole way through and there was just a kick of a ball between the teams at the end,” said Healy, reflecting on Sunday’s loss to Sligo.

"We missed a few chances in the last 10 minutes and that just killed us. We have to dust ourselves down and go again. We’ve to try and win every game now. That’s what we set out to do at the start of the campaign.

“Our first two games were, potentially, the toughest two games. Division Four is tough, but you can usually lose one game and still go up. That’s our ‘dummy’ life gone now.

“We played London over there two years ago and they always have a few really good footballers. You can’t go over there with the attitude that you are going to walk over them.”

Antrim will also hope that Sunday’s loss to the Yeatsmen isn’t a return to their 2019 league form when they suffered a hat-trick of one-point defeats to Derry, Leitrim and Waterford as their promotion hopes faded early in the campaign.

Healy knows that Antrim will have to grind out results if they are to make a return to Division Three in the spring.

“This is Division Four and a lot of the games are going to come down to one or two points,” said Healy.

“It is nearly harder to get out of Division Four than it is to stay in Division Three. I think there is a good attitude this year. What have we to do to get over the line?

“I don’t know. This is a hard place to come and we knew it was going to be a tough game. We have to keep going and try and cut out the silly mistakes which are costing us.”

While Antrim will be seeking their second win in three outings, the Exiles will be hoping to secure their first points after back-to-back defeats to Sligo and Limerick.

They lost to Limerick 0-8 to 0-7 last weekend, but shipped 5-9 against Sligo in the first round, losing by 13 points.

Antrim are likely to re-jig their starting 15 for the trip to London. Healy, captain Declan Lynch, Paddy Cunningham and Conor Murray all caught the eye against Sligo, but several other players performed below par.

Odhran Eastwood and Conor Small both looked lively when introduced and could see some game time against London while a midfield reshuffle is probable after Antrim struggled to win primary possession last weekend.

Harbinson hinted after the game at making small tweaks rather than wholesale changes for Sunday’s game, and those switches should be enough to see off the challenge of London.