Healy quietly confident ahead of his big night 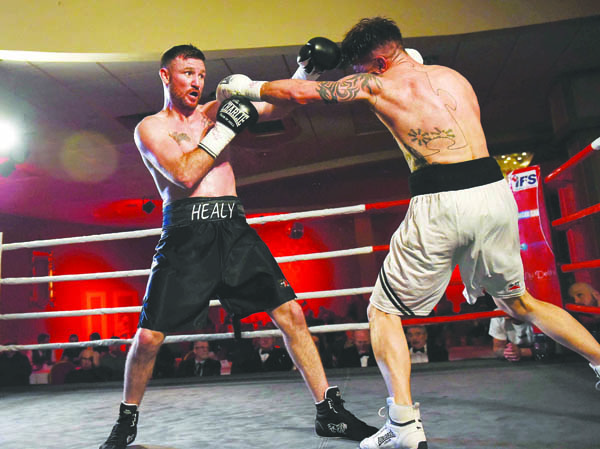 IT has been a tournament beset by withdrawals, but on Saturday at the National Stadium in Dublin, eight middleweights will compete in a ‘Prizefighter-style’ tournament to claim the prize of Ireland’s Last Man Standing.

With a cash pot of €50,000 and live coverage from TG4 (8.15pm), there is certainly plenty of incentive to the eight men who will battle it out on the night with Gerard Healy flying the flag for Belfast.

The draw for the competition with be made later this week with four quarter-finals over three-three minutes rounds, leading to semi-finals and a final over the same distance on the night to crown the winner.

‘Boom Boom’ has been waiting for an opportunity like this his whole career and the Lenadoon man says that while he will not enter as favourite, he is going fill of confidence and has nothing to lose.

“I have always been up in contention for the Irish title at middleweight and light-middleweight so I deserve my shot in this,” he said.

“I believe that I’m every bit as good as every one of them, so whatever they bring I’ll be ready for it.

“I’ll be giving this my all and I’m carrying the flag for Belfast as Alfredo Meli has pulled out so hopefully everyone will get behind me.”

Initially, Padraig McCrory and Meli were listed to take part, but the arrival of his first child forced McCrory to take a step back, while MTK Global-managed Meli was also ruled out due to MTK’s ongoing decision to boycott all Irish media, including sports, whilst removing its fighters from boxing in the south due to perceived unfair treatment from Irish news media.

Healy has been more than happy to step in and will face competition from Vladimir Belujsky, Chris Blaney, Roy Sheehan, Nick Quigley, JJ McDonagh, Jack Cullen and Owen Jobburn who was just added this week following an injury to Bernard Roe.

“It’s been a bit of a nuisance, but there were a couple of good fighters drafted in there last week,” added the West Belfast man.

“JJ McDonagh and Vladimir Belujsky have come in and Belujsky is a decent fighter who has ben calling ‘Pody’ (Padraig McCrory) out.

“I like watching JJ fight. He’s a good, rangy southpaw, but I can do southpaw and orthodox.

“I’m actually good at fighting southpaws so we’ll see. Whatever people bring, I’ll just have to be ready for it.

“I know there are going to be seven quality fighters there anyway. I don’t know if I can pick one who I would like to fight first, but I am prepared for whatever is put in front of me.”

Healy’s sponsors, The Suffolk Inn have sponsored a 52-seater coach to transport Healy’s fans on the night and there are still some places available free of charge for those who have bought a ticket (contact the bar by Thursday night to secure fight ticket and place) so he will have a good support on the night. He hopes that can help drive him onto victory in a tournament that he has no experience of before.

McDonagh and Quigley are both past Prizefighter finalists so will have an understanding how to stay warm between bouts on the night, but they have no control of their path through the competition and Healy reiterated his belief that it will come down to whoever hits a bit of form on the night and enjoys a vital bit of luck.

“It’s just really the luck of the draw,” he stressed.

“You never get the favourite winning these things, it tends to be an outsider who comes along and takes the victory at the end. That has kinda been in my head.

“I know I’m the underdog going in here, but I’m on my weight now and can reserve my energy all this week so I’m ready to go on Saturday.”

Reaper returns
It will be a busy night at the Dublin venue as there will also be an Irish light-middleweight title fight between Craig O’Brien and Jay Byrne, while another West Belfast man will be in action.
Mark Morris returns to the ring after almost a year out when he takes on Victor Rabei with victory for ‘The Reaper’ hopefully launching a career that has been stop-start since his debut back in November 2013.