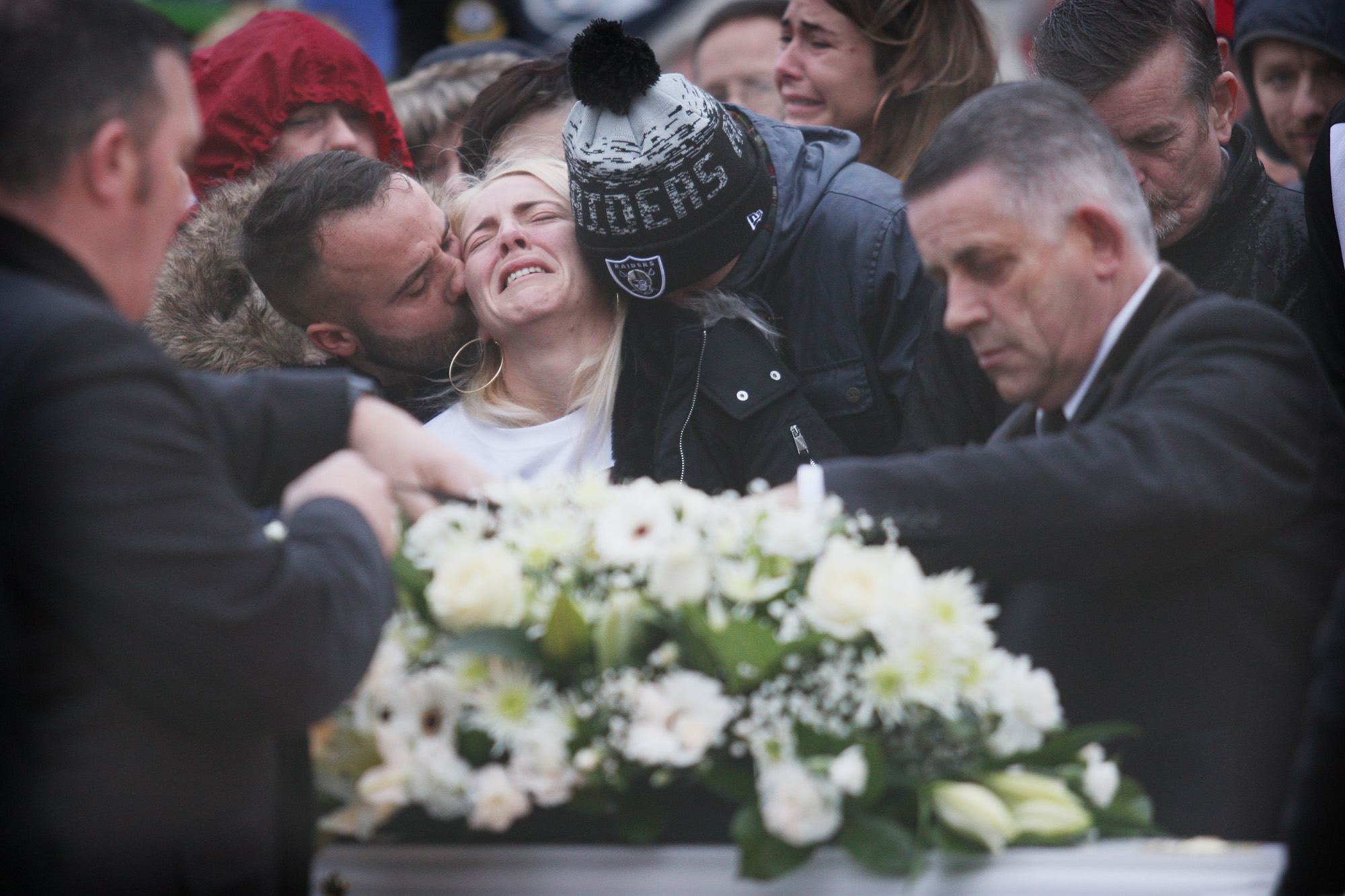 HUNDREDS of mourners gathered under grey skies this morning to pay their respects to 13-year-old Eoin Hamill who was knocked off his bicycle and killed on Friday afternoon.
Pupils and teaching staff from the young boy’s school Coláiste Feirste and the Gleann Boxing Club stood in the morning rain and formed guards of honour at the entrance to a packed Holy Trinity Church with many holding photos of the promising and talented young boxer in the ring. Among the mourners were Ulster Club Development Officer with the Irish Athletic Boxing Association (IABA) Paddy Barnes, former World bantamweight champion Ryan Burnett and members from North Belfast’s Phoenix Boxing Club and the Star ABC Boxing Club.
Many of those gathered wore t-shirts with Eoin’s picture and the word ‘Champ’. A framed photo of Eoin in the boxing ring was placed on the altar as Holy Trinity parish priest Fr Brendan Mulhall told the congregation how they had gathered with “broken hearts”.
Eoin’s coffin was adorned with red boxing gloves in remembrance of the sport he loved. Fr Brendan spoke of how Eoin “touched the lives of everyone who knew him” and added: “We are all feeling shocked, numbed and are trying to get our heads around what has happened”.
“God is very close to us and his heart is breaking as our hearts are breaking,” he said.
Fr Brendan spoke of the “unspeakable tragedy” at the loss of Eoin and how “no words of mine can lesson the pain, the immense loss, the deeply broken hearts” at the death of “this beautiful little boy”.
In his Homily the Turf Lodge priest told the congregation that Eoin “had his whole life in front of him”.
“Nobody expects to bury their child, their grandchild. Eoin really did live his short life to the full and packed so much into those 13 years. He was full of life and fun, he was a gift to everyone who knew him. He loved boxing and his talent saw him travel to Philadelphia to compete. Eoin won a huge array of medals and trophies for his boxing and he never went anywhere without his Rosary beads.
“He was, as his family say affectionately and lovingly, a ‘cheeky wee monkey’. But he was a cheeky wee monkey who had a smile that would melt anybody’s heart.
“Over these past days Eoin’s parents Martin and Lisa have asked me, ‘Is he really in heaven?’ I said to them I am utterly convinced he is.”
Eoin’s family and friends brought gifts of his medals, framed photos and the young boy’s boxing gloves to the altar.
As Eoin’s coffin was led from the church a round of applause erupted followed by the release of a single white dove before the coffin was draped in the Gleann ABC flag.
Eoin was later laid to rest in Milltown Cemetery.