Herring-Frampton once again on ice as 'Jackal' sustains hand injury 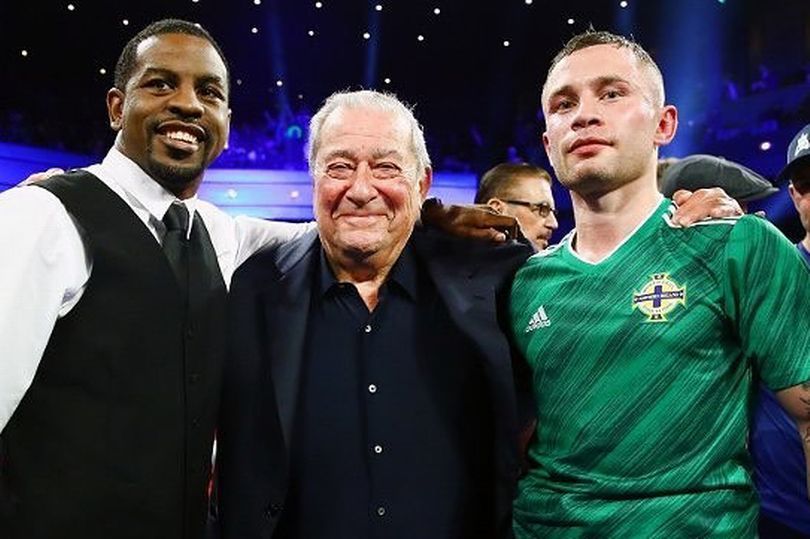 A HAND injury has ensured the eagerly-anticipated showdown between Carl Frampton and Jamel Herring is postponed for a number of weeks.

'The Jackal' was due to challenge Herring for the WBO super-featherweight title in London next Saturday, but it has emerged that it will not likely take place at the end of March instead.

On Tuesday night, American boxing journalist Adam Abramowitz Tweeted that the Belfast man has sustained a hand injury and those rumours were confirmed by a source with the clash between the pair likely to be put back just a few weeks, with March 27 is the mooted date.

Rumours began to circulate there was an issue earlier this week when it emerged that Herring had not left the United States having earlier confirmed his intention to travel to London two weeks before the fight. A rather cryptic Tweet by 'Semper Fi' on Monday raised further questions and the suspicions were then confirmed on Tuesday.

Source: Herring-Frampton is postponed due to a Frampton hand injury. They are looking at March for a rescheduled date. Expect an official announcement later this week.

This is a fight that has been in the works for 15 months by has been beset with issues.

Herring joined Frampton in the ring following the Belfast man's win over Tyler McCreary in Las Vegas back in November 2019 with a meeting between the pair seemingly inevitable, but hand injuries sustained before and during that fight forced the fight to be pushed back until the summer of 2020 wit Windsor Park the supposed venue.

That, of course, would fall by the wayside due to the pandemic leaving sport in lockdown, and the pair temporarily went their own way with Frampton defeating Darren Traynor in London in August in an interim bout, with Herring defending his title against Jonathan Oquendo in Las Vegas.

While the American did retain his title by way of a disqualification victory, a cut sustained by Herring in that fight meant it could not take place by the end of 2020, with next Saturday finally confirmed as the date when the pair would meet after the British Boxing Board of Control had halted all action until the middle of February.

However, this latest development will ensure that they will have to wait a little longer to settle their differences with Frampton bidding to become the first boxer from Ireland to win world titles in three different weight divisions.

It appears the London card will continue, meaning Anthony Cacace's first defence of the British super-featherweight title against Leon Woodstock - itself twice delayed - will top the bill.

Cacace won the title against Sam Bowen in November 2019 and was due to defend against Woodstock last summer and again in October, but both times he was forced to withdraw due to a mouth infection. However, he has since recovered and is ready to return to action and will do so as an unexpected headliner next Saturday.

Official confirmation is expected in the coming days with the new date for Frampton's bid to create history also anticipated by the end of the week.