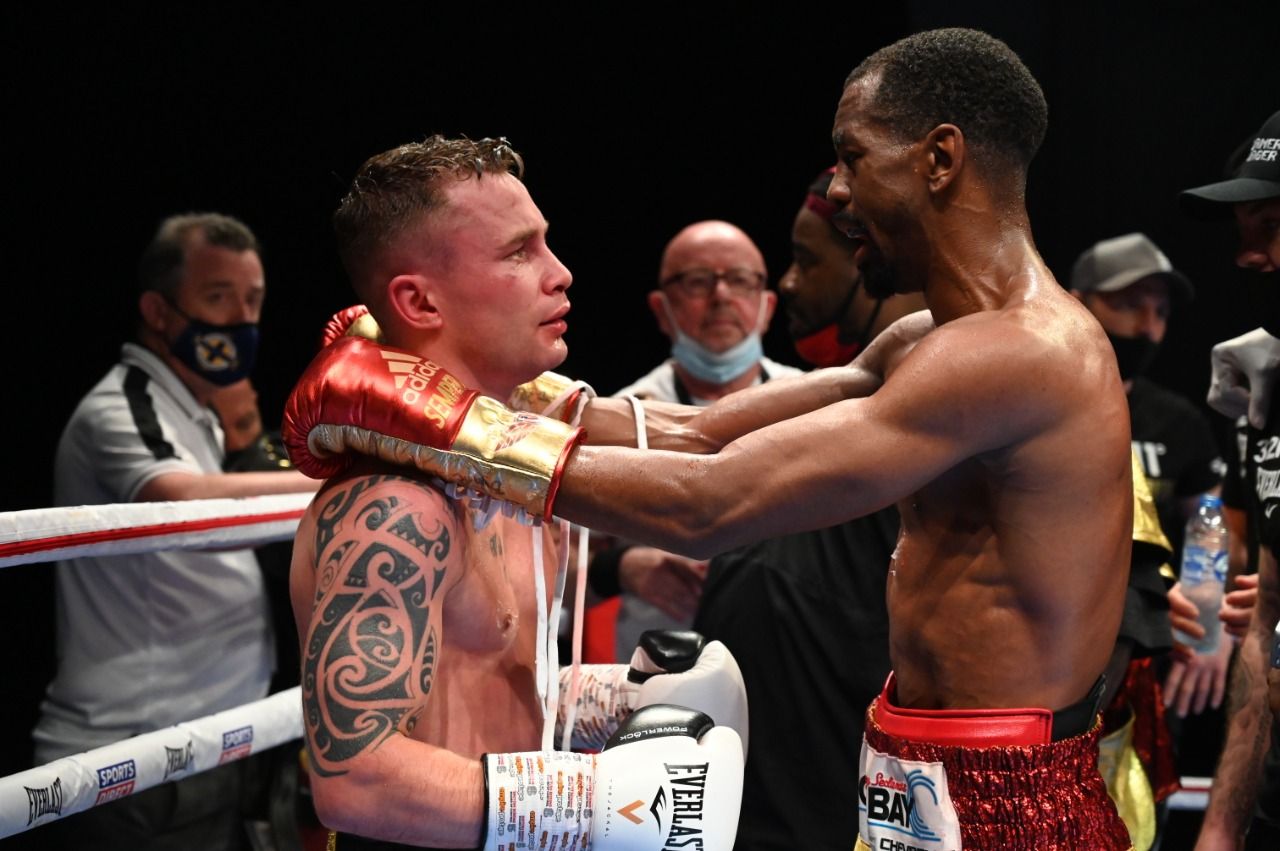 CHOKING back the tears, Carl Frampton confirmed this was it in the aftermath of Saturday's loss to Jamel Herring in Dubai.

'The Jackal' had hoped to sail off into the sunset as a three-weight champion, but it just wasn't to be at Caesars Palace as defending champion Herring proved just too big and strong to close the show in the sixth round.

In a career in which he had scaled the highest of highs: unifying the super-bantamweight division and then silencing the doubters by adding the WBA featherweight title on a night in New York in which he was at his absolute best that also earned him the prestigious Ring Magazine Fighter of the Year award for 2016, the aim was to produce one final hurrah at 130lbs.

It was always going to be a huge ask against Jamel Herring, but one that he and many more felt he could just just about pull off thanks to his hard-earned reputation, but it simply proved to be a step too far.

In the lead-up to Saturday's showdown in Dubai, Frampton said that defeat would see him exit the sport. He was true to his word, announcing his retirement as he donned a t-shirt with he image of his late amateur coach Billy McKee who he had hoped to dedicate a win to.

"I said before I would retire if I lost this fight so that's exactly what I'm going to do. I wanted to dedicate the win to Billy McKee and my whole career to my wife and kids as they made so may sacrifices. I have been away so long and missed them growing up, so I just want to dedicate my life to my family now.

"Boxing's been good to me but it's also been bad to me. The last few years with these boys (Jamie Moore and Nigel Travis) have been the best of my career, but I just want to go home to my beautiful wife and kids."

Frampton needed a good start to this fight but it just didn't materialise despite his best efforts.

From the opening bell, the sheer size of southpaw Herring injected a dose of reality into this battle. It was a rather cagey opener with the champion pawing with his jab to find the range as Frampton feinted to draw a mistake, but it wasn't forthcoming and he ate a left hook to the jaw.

The pace upped in the second but again it was the New Yorker who was in control, controlling matters from the centre of the ring as his left came into play with Frampton at mid-range.

A trademark left uppercut from the champion greeted the start of round three as Frampton tried to make this a fight on the inside by pouring in and had a little success with a right to the head as Herring left his chin exposed, but the better work again came from the champion who was clearly three rounds up.

Frampton needed to gain a foothold and it came in the fourth as he upped the pace, forcing Herring onto the ropes and a left to the head opened a nasty gash over the right eye. He retaliated with a left uppercut but suddenly there seemed a glimmer of hope for the Belfast man who gained momentum.

He opened the fifth in the same vein, but Herring found the equaliser, dropping a square-on Frampton with a counter left. The challenger rose immediately with the head clear, but it was anything but when nailed with a trademark left uppercut in the sixth that left him clearly hurt as he struggled to rise before the count reached 10.

Gamely, he tried to battle back but the writing was on the wall as Herring sensed the finish and unloaded with flush shots that left Frampton dazed and on unsteady legs as the towel rightly came in after 1.40 of the round to signal the end of the fight and a career.

"I just got beat by the better man," admitted 'The Jackal' who bows out with a record of 28-3.

"I struggled to get inside him. He was sharp shooting from distance, had a perfect game-plan and I just got beat. Zero excuses - I had an amazing camp and was coming into this fight to win it, but I was just beaten my the better man."

Herring was simply too good on the night, putting to bed any notions that he would be drained at the weight or feeling the effects of jet lag.

Having produced a performance of such quality, there is nothing to suggest he can't stay on at 130lbs and hinted after that he would like a crack at WBC champion Oscar Valdez, but also repeated his pre-fight intent of stepping up to lightweight.

Shakur Stevenson is mandated to be next in line for the WBO title so that is an option but this win has opened doors for 'Semper Fi' who was as classy after his victory as he was during it.

Yes, this probably the biggest victory of my career, but i just want for everyone to pray and show love for @RealCFrampton. I’ll always be a fan, and he’s a true gentleman. God bless you, my man. Please make it home safely to your beautiful family.

"It was just an emotional rollercoaster to get here," he said.

"My last outing (against Jonathan Oquendo) wasn't my best and people doubted me, called me every name in the book. But even with the cut, I wasn't going to give up or quit.

"Carl Frampton is just a tremendous champion; I've been a fan from day one. It's tough for any veteran to go out of the sport like that, but he's able to walk out on his two feet so God bless him and his family.

"He's always going to be one of my favourite fighters. I'm just honoured to share the ring with him. He's a two divisional champ, has done great in the sport, so it was just an honour."