Holy smoke! The Priests climb on board at rehearsals for new Lyric production 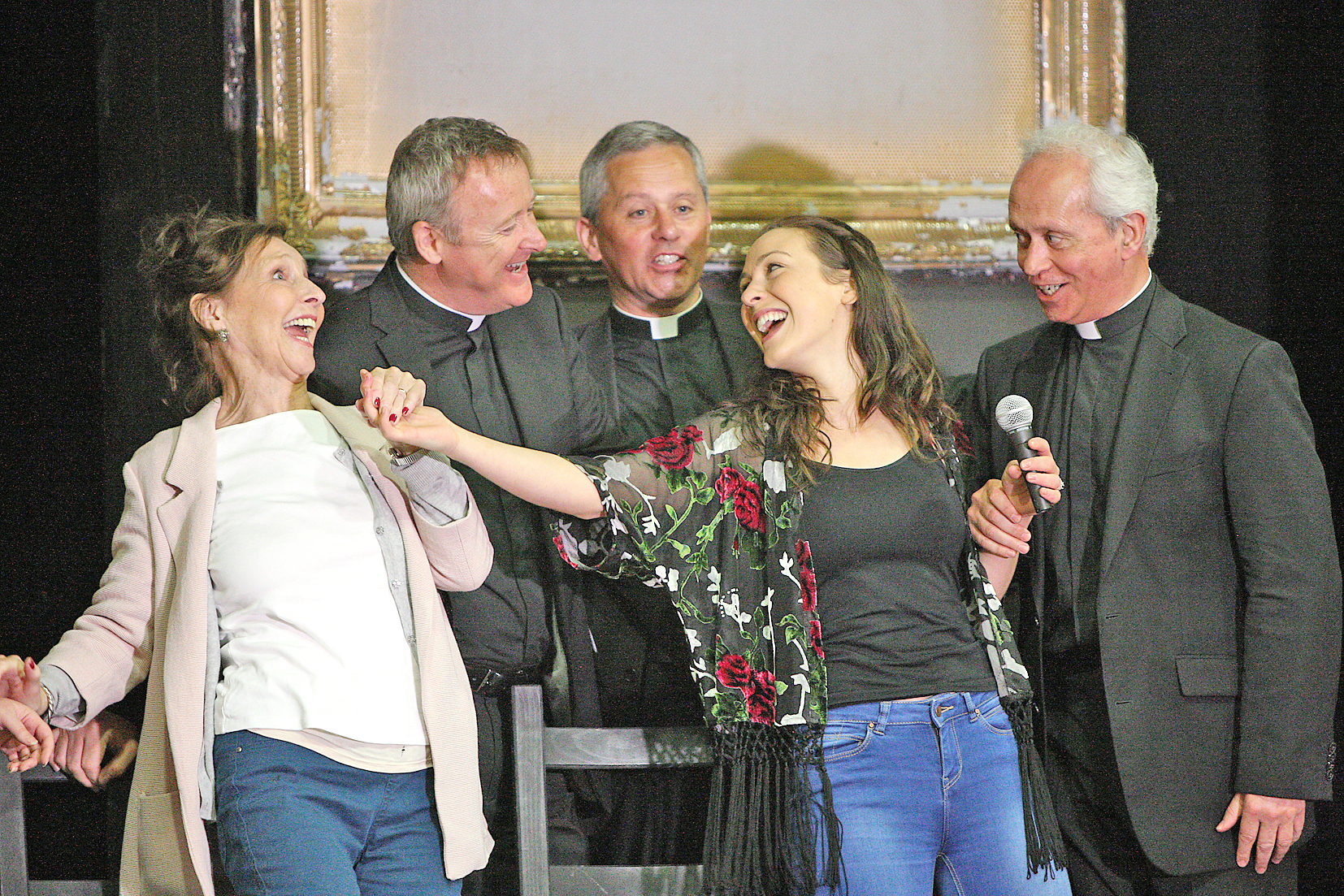 IT was a case of all aboard ‘The Holy Holy Bus’ on Tuesday as cast and crew from the upcoming Lyric production welcomed some special visitors to rehearsals.

The grand ballroom at the Devenish Complex at Finaghy is the rehearsal space for the play ahead of a ten-day run at the South Belfast theatre. Invited media were given a musical treat as singing sensations The Priests – Fr Eugene O’Hagan, Fr Martin O’Hagan and Fr David Delargy – unexpectedly joined the cast on stage to sing a few classics from the Irish songbook.

Written by Pearse Elliott, the Brassneck Theatre production charts the journey of four women who set off once a year from their West Belfast parish to visit the holy sites of Ireland on board the ‘Holy Holy Bus’.

The play stars Stella McCusker in the role of ailing matriarch Lily, ever yearning for a spiritual uplift and a smoke; Caroline Curran as Rita, a Shankill interloper who comes equipped with a large dollop of curiosity and an even bigger bottle of vodka; Roisin Gallagher as Sally, Lily’s daughter, who’s searching for meaning to her life in the wake of the traumatic collapse of her marriage; and Claire Connor as Perpetua, the devout driver.

“The Holy Holy Bus was inspired by two things – my granny Lily and faith,” smiled Pearse. “Lily used to go on the Holy Holy Bus and tell me about their antics and the saints they had seen. Faith is the great leveller that puts manners on the one hand and that offers solace and comfort in the darkest of times. I can’t say that I’m a religious man, but I do like to be around people who do have faith. It reassures me and it instills that sense of wonder we all should have and that we dare not lose.”

Director Tony Devlin said the work will be performed at the Lyric before going on a short tour. He’s a big fan of the play which he said will have audiences “laughing, crying and even praying for some divine inspiration along the journey!”

The Holy Holy Bus will run at the Lyric Theatre from Tuesday, June 30 until Friday, July 10. For more information visit www.lyrictheatre.co.uk