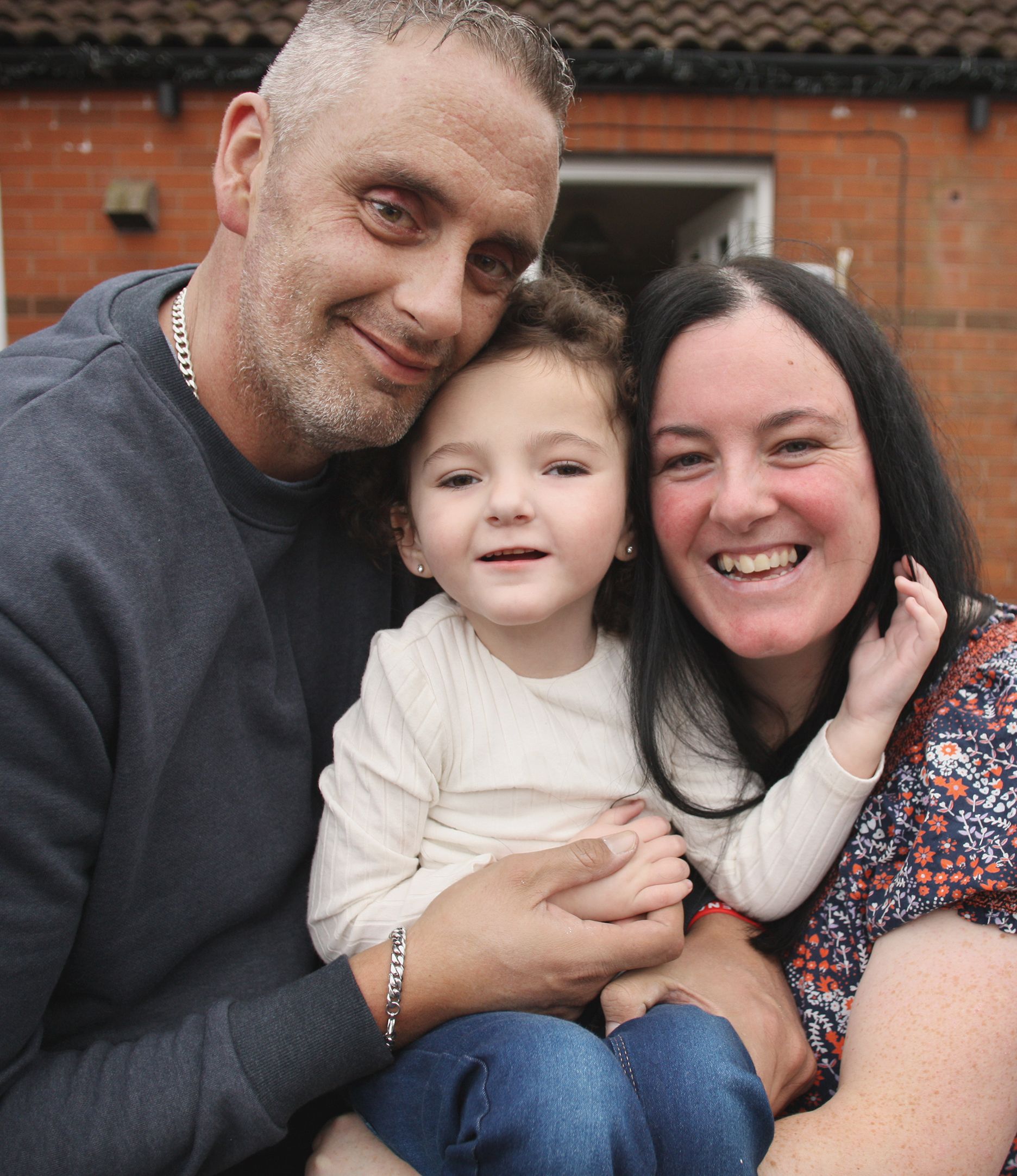 TOGETHER: Mum and dad Emma Morgan-Laverty and Andrew Laverty with their daughter Myah

A WEST Belfast toddler, who suffers from a debilitating brain condition, is to be the face of the Northern Ireland Hospice's Christmas appeal this year.

Three-year-old Myah Laverty was born with Hydrocephalus, a condition that results in excess of fluid in the brain.

A huge build-up of fluid around Myah's brain saw her undergo several high-risk surgeries after birth, with doctors stating that she may never talk or go to school.

Having miraculously pulled through, Myah faces developmental delays and suffers from severe epilepsy.

She underwent further surgery just eight weeks ago due to complications with the small plastic tube, known as a VP Shunt, which helps drain fluid from her brain.

Despite initial medical prognosis, the inspirational Poleglass girl recently started nursery school, has an ever-expanding vocabulary, and can move around by crawling or with the help of a walking frame.

Throughout her illness Myah and her family have received crucial support from the NI Hospice, which has selected her as the face of its annual Christmas appeal.

Her mum, Emma Morgan-Laverty, told of the charities invaluable care during their arduous journey.

"The Hospice is really a respite option for Myah and us as a family," she said

"They've provided counselling for me and Myah's daddy, and they provide the use of facilities even when we're not staying. They have a hydro pool, which she absolutely loves and they gave us a slot on a Thursday night.

"When Myah is in anyone of us can go up, they provide your food when you're there, they just really look after you and she gets one-to-one care when she's there.

"When she was there recently she was there for four days and they never left her side, but the care they provide is unbelievable and it gives you peace of mind as a parent. Because of Myah's condition you trust very few people with her because her needs are so complex and there's so many things you need to be careful with, but up there they're trained nurses who specialise in what we need them to be specialised in, so you feel much more at ease letting her stay.

"The first three times she was there I stayed with her because she was still very young and I couldn't leave her. Now when she goes up she's waving me and her daddy bye bye," Emma laughed.

The Hospice's Little Stars Christmas appeal will see Myah's story featured across the charity's literature and social media posts this winter in a bid to raise vital funds.

"The Hospice don't get any funding so this is their way of getting the money to support families like us," Emma said.

"If people supported the appeal it would be massive. It means for families like us there are more stays, better facilities, it's more staff. They need to raise around £11million a year to just keep doing what they're doing at the minute. That's a lot of money and, as cliche as it is, every little helps."