SQUINTER: BBC bosses decide Nolan can dish it out but they can't take it 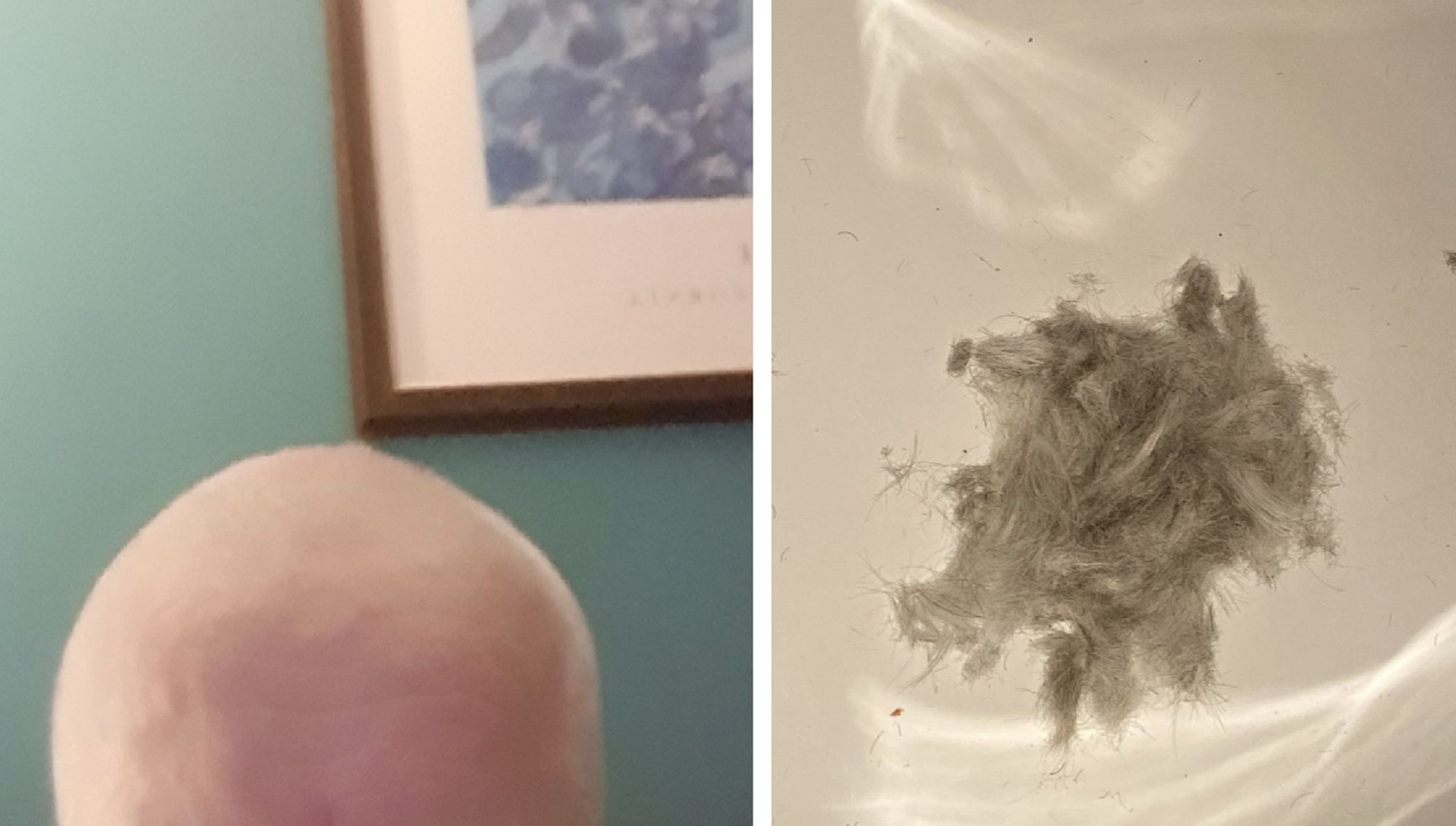 EGGHEAD: Squinter’s newly shiny head and, below, the hair looked darker when shorn

AN online petition calling for the cancellation of BBC Radio NI’s Stephen Nolan show has prompted the intervention of the big guy’s Ormeau Avenue bosses after it passed its 10,000-signature target at the weekend.

The petition urges people to sign up because the show “seeks to stir sectarian tensions for ratings”. It adds that the morning phone-in “regularly platforms unelected representatives and apologists for paramilitary organisations.”

It seems the final straw for the people drawing up the petition was the recent comment on the show by Loyalist Communities Council Chair David Campbell that it may be necessary to “fight physically to maintain our freedoms within the UK”.

Responding to the news that the petition had hit the 10k mark, a BBC spokesperson said: “Attempts to smear and censor BBC journalism are wrong. None of this is compatible with press freedom. The BBC’s airwaves remain a place of open enquiry and debate for everyone.”

It falls to Squinter to point out that the BBC statement is, well, let’s see now… how best to put this?… all over the place. The preamble to the petition is robustly put, there’s no doubt about it, but if there’s one show on the wireless in Ireland and the UK whose currency is robustness it’s the Nolan Show. In fact, robust is one of the milder terms that might be used to describe its uniquely combative nature. Loud, would be one; vulgar another; low-rent, tawdry, strident, fulminating – the list goes on.

You don’t even have to listen to the show proper in order to divine its nature. The cocky, you-lookin’-at-me theme tune with the bragging biggest-show-in-the-country lyric tells you straight off the bat that if you’re looking for thoughtful, measured debate you’d best start twiddling that dial. Against that background, it’s kind of fitting that the petition should raise its voice to be heard.

Then there’s the press freedom argument. There are two entities which have responsibility for press freedom. The first is the government, which has the power to place either onerous or light-touch regulations on how the media conducts its business. And there are the media outlets, whose standards of behaviour bear heavily on the degree to which their activities are restricted or enabled. The plain fact of the matter is that the consumer of media has no role in press freedom; it has never been – and should never be – up to someone who listens to the radio, watches TV, reads a paper or scans the news sites to ensure the upholding of press freedom.

More than that, media consumers have freedoms too – the freedom to complain about what they’re reading, hearing or seeing, and the freedom to use any legal platform at their disposal to make their complaints. And not only are those freedoms not a threat to press freedom – they complement it.

It’s interesting to observe the similarities between the early days of the printing press and the early days of social media (and posterity will judge 20 years as very much the early days). Just as governments vigorously opposed the increase in literacy and the rapid spread of ideas brought about by moveable metal type, so governments and media outlets today look askance at the ability of the public to transmit ideas through non-traditional channels open to all.

So a phone-in show may draw a big audience by tying two cats’ tails together and throwing them over a clothesline daily; but, according to Ormeau Avenue, when listeners have had enough and decide that cats on a clothesline is bad craic, they’re impinging on the BBC’s freedom to put out a cats-on-a-clothesline show.

If you wanna get ahead, get it buzzed

SQUINTER knew that keeping fit and looking after yourself brings many benefits, but he had no idea that your hair stays cut if you’re an athlete.

Squinter watches a lot of sport, as regular readers of this column will know (yes, yes, okay, he bets on most of it, too). But even though we’re in lockdown it’s remarkable how many male footballers and rugby players manage to keep their hair so immaculate when all the barbers are closed.

The elaborate fades, the waves, the twirls and whirls – all still looking as if they were just done by a professional in time for the players to trot out for the live matches.
What? They’ve got their personal barbers breaking lockdown? No! Eh? Some of them have put pictures up on line? Get away!

Be that as it may, Squinter’s unspectacular but stubborn grey thatch has kept growing at its normal pace and as Squinter found the long hair of the earlier lockdowns a terrible pain in the rear, he took a momentous decision at the weekend.

Off he trotted up the stairs with the big guy in tow. Wearing just a pair of shorts, he sat in the bath while the apprentice barber took out the buzzers and got wired in. Not a number 3. Not a number 2. A number 1. Down to the wood. Total slaphead territory. The shortest haircut Squinter has had in all his years on the planet.

Or at least, the shortest buzz he’s had, because it wasn’t really a haircut was it? The big lad did a good job, but without detracting in any way from his achievement, moving a buzzer about until there’s nothing left to buzz is more Vidal Buffoon than Vidal Sassoon. He wouldn’t have been able to pull off Squinter’s regular barber shop job: tight at the back and sides, longer on top for a bit of a shade, neck scraped with a straight razor, eyebrows buzzed. Eight quid and a pound tip: job’s a good ‘un.

Squinter was and is delighted with his bald head, even if not everbody else in his bubble was. But a couple of things occurred. Squinter’s been a bit of a silver fox for some time now, but it occurred to him as he gathered up the fallen locks that his hair was rather darker than he’d thought, even if it didn’t look that way to the casual observer. The proof is there for you to see with your own eyes. The trick now, when the hair (hopefully) grows back, is to figure out a way to let those dark bits show up as much as the grey bits.

And secondly, here’s a question that veteran slapheads will know the answer to: how do you get a lather going when you’ve no hair? Squinter stepped into the shower and, as usual, squirted a decent-size blob of Pantene-V on to his palm and went to work. Except there was no work to do. Without hair to cling to, the shampoo just ran in streams down his head and on to his neck and shoulders.

Squinter has always showered with the generous lather worked up by shampooed hair, but no hair, no lather. Squinter gave the old shower gel a bash, but while that spread quite well all over Squinter’s well-toned torso, he remained stubbornly unlathered.

And so the Christmas soap it was, for you can always count on getting up a lather with a bar of soap in your hands. And suddenly he felt like he was back in the secondary school shower.

So now all that’s to be done is to watch and see how long it takes for the boiled egg look and feel to disappear and observe how the crowning glory behaves in the next few days and weeks. Will it grow back with satisfying evenness?  Will the ear tufts win the race and leave him looking like Jim Allister for a fortnight? Will the cut prove a renewing stimulant and might he end up with a mane like Keanu Reeves?

Time will tell. The Tories in England are growing restless and it appears as if the apparent success of the vaccine roll-out is emboldening them into another disastrous early relaxation of lockdown. And if the Assembly follows, the barbers here could be open again before Squinter needs another home haircut. Swings and roundabouts, eh? Swings and roundabouts.

Over or under? Either way it’s a total no-goer

IT appears the bridge from Our Wee Country to Scotland (or is it vice-versa?) is not going to be built after all. Somebody has finally decided that attempting one of history’s greatest and most expensive maritime engineering feats doesn’t make much sense when you can’t get a train from Belfast to Belfast International Airport. Now it’s a tunnel.

In the interests of fairness, and since Boris Johnson wrote two Daily Telegraph columns in the lead-up to the Brexit referendum – one anti-EU and one pro-EU – Squinter has decided to write two paragraphs about the tunnel motivation.

1. Boris Johnson has decided that the best way of strengthening the Precious Union© is to build a tunnel instead of a bridge.

2. Boris Johnson has decided that the best way to make unionists forget about their Protocol woes is by pretending he’s going to build a tunnel.

Squinter’s not sure why Boris Johnson has decided to scrub his bridge dream. The more cynical are suggesting that he hasn’t got a great track record when it comes to bridges. But the doomed Thames Garden Bridge project was a formidable engineering project and it’s little surprise that as Mayor of London Johnson was unable to pull it off. His failing to build a £2 million 300-metre footbridge over a river – essentially a B&Q water feature  – in no way suggests that he was anything but the right man to build a £24 billion, 25-mile-long deep-sea superstructure over a World War Two munitions dump.

According to Scottish engineer Alan Dunlop, who drew up the 2018 bridge plan endorsed by Johnson, a submerged tunnel suspended by pontoons would cost between £8 and £10 billion, significantly cheaper than the £24 billion bridge.

Squinter’s not sure which never-going-to-happen project he’s in favour of. From a personal point of view he’s going to go with the one that offers the most benign outcome when the million tons of explosives in the Beaufort’s Dyke undersea warehouse goes off. Which begs the question, when the disaster movie unfolds, would you rather the vast depths of the Irish Sea crashed in on top of you, or would you rather wobble for a bit before plunging a hundred feet into the roiling ocean below?

Squinter has gamed both outcomes in his mind and he has to say that, while neither is an optimal weekend-break-in-Glasgow experience, being instantly obliterated by a hundred billion tons of ice-cold water would probably give you less time to regret having left the house.