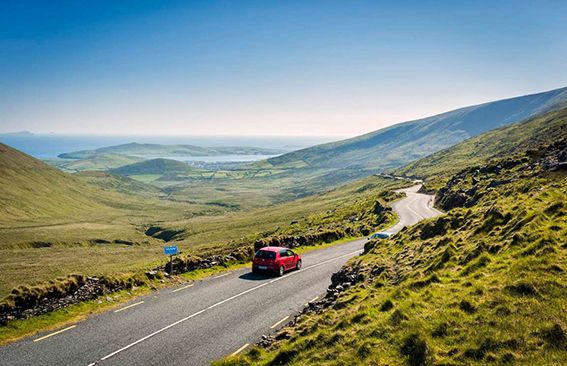 STUNNING: The Wild Irish Way is an Instagram sensation

AS if we didn’t already know it, car manufacturer Abarth has decided that the two most beautiful driving roads in Ireland and Britain are Irish.

The method used to ascertain the results was to record the most hashtags used on Instagram and the top two places on the list were the Wild Atlantic Way with 1.57 million, and the Ring of Kerry with 222,293. Third place went to the North Coast in Scotland with 141,529.

An initial shortlist of locations created by Abarth based on the most exciting roads to drive its cars on, which they then ranked based on number of hashtags on the social media platform, also put Irish roads way out in front.

Over the past four years I have driven the whole of the Wild Atlantic Way, both as a chauffeur driving American tourists, and along with my wife Barbara when fulfilling one of her bucket list items after she took early retirement.

Seamus Heaney wrote:
And some time make the time to drive out west
Into County Clare, along the Flaggy Shore,
In September or October, when the wind
And the light are working off each other
So that the ocean on one side is wild
With foam and glitter...

One of the longest defined coastal routes in the world, the Wild Atlantic Way winds its way from the Inishowen Peninsula in Donegal to picturesque Kinsale in Cork, a total of 1,600 miles.

And what a drive the Ring of Kerry is. I have driven it several times over the past few years, leading American tourists who were totally beguiled by it – and no wonder. You can drive through miles of green, rolling hills, explore colourful towns and marvel at the most fabulous, rugged coastline, and it only gets better the more you drive it. If you go, allow about eight hours to enjoy the 111 miles properly.

No doubt an Abarth 500 would be an amazing car to drive along these tight and twisty roads. I drove Kinsale to Limerick and the Donegal section of the Wild Atlantic Way in a Vauxhall Cascada, a two-litre turbo-charged convertible sports coupé. It handled the roads and challenges admirably, soaked up the miles and provided some wonderful wind-in-the-hair experiences with the roof down. It provided comfort and economy in equal amounts and was a truly memorable driving experience. The remainder of the Ring and the Way I drove in a Mercedes V Class, a very different car to the Vauxhall, bigger and broader, but it managed the roads comfortably and economically, making the miles an absolute pleasure.

Do we really need an Italian car manufacturer to tell us how wonderful our roads are? No, but we do need to go make some plans and get out and drive them. Divide the Wild Atlantic Way into three sections and give each one a week – you’ll enjoy it all the more. Happy motoring!

Top Gear presenter out of touch with ordinary drivers

I WAS seriously amused and a little miffed watching Top Gear this week when tame racing driver and anchor presenter Chris Harris did an overview of, as he referred to them, cars that ordinary people drive.

Such cars are unlike the super-cars he and co-presenters Paddy McGuinness and Andrew Flintoff drive and review. Now if you think I am jealous of the three guys, you are right, but that doesn’t make me wrong here. In a short piece Chris did a roving review on a selection of cars priced from under £17k to over £40k. He rubbished every car in the collection except for the Mazda 3, which he said he thought was beautiful. Nothing about how it drives or performs, just that it looked nice.

On his way through the lines of brand-new mainstream cars, he rubbished the Vauxhall Corsa, totally ignoring the fact that it is the “People’s Choice”. Chris may be a bit tasty in a racing car, and can afford to drive Porsches and Lamborghinis, but the Vauxhall Corsa has outsold every other car including the Mazda 3 for the past two years.

His comments remind me of the words of a Jonathan Kelly song: “One man may not be right... but can all of these be wrong?” The guys are great at what they do, but they have lost touch with reality. They are not car reviewers, they are entertainers. Bring back Captain Slow – he appreciated real cars.

Whilst slagging off the Vauxhall Corsa he also ridiculed the Kia Sportage, even though Kia has just become the best-selling car brand, with the Sportage the best-selling compact SUV and the Picanto the best-selling city car. In addition to Kia’s superb sales figures, they have just won an award for the Green Manufacturer of the year.

Come on, Top Gear, get with the plan.

Get out the soapy water and avoid a hefty penalty


THIS may sound more than a bit farfetched, but new Highway Code rules could see you fined £1,000 for not keeping your car clean. Yes, you read that right. The new rules mean that you will be breaking the law if you fail to keep your vehicle clean landing you with a hefty £1,000 fine and that’s according to new Highway Code laws in England, Scotland and Wales. Such rules are in time generally adopted here.

Under the new rules, certain parts of your vehicle “must be kept clean and free from obstruction to vision” and, if you decide to take it to court, the fine can increase up to £5,000 with up to nine points added to your licence.

The laws stipulate that lights, indicators and reflectors must be always kept clean and clear. Numbers plates must also be fully visible. Additionally, windscreens and windows must be kept clean and free from obstructions. This might sound like overkill, but it is very important. I know drivers who don’t keep their car clean thinking that cleanliness is not particularly important, but, if light lenses are not clean, a driver will not have a good view of the road ahead in darkness, and, other drivers could have difficulty seeing you. If you don’t keep rear reflectors clean, in the event of rear light failure after dark other drivers will not be able to see your vehicle, making a rear-end collision more likely.

Car number plates are a different thing all together, they do not help us see or be seen, but, if your number plates cannot be read by the police, you are breaking the law and will be fined. With the increased number of Automatic Number Plate Recognition (ANPR) cameras in use checking on the tax, MOT, and insurance status of cars now widely in use, police forces are very strict on dirty plates, so don’t get caught out.

Keeping all of these items clean is as simple as using some soapy water and a cloth to clean your lights, indicators, reflectors, and number plates, not forgetting your front and rear screens. You know it makes sense.