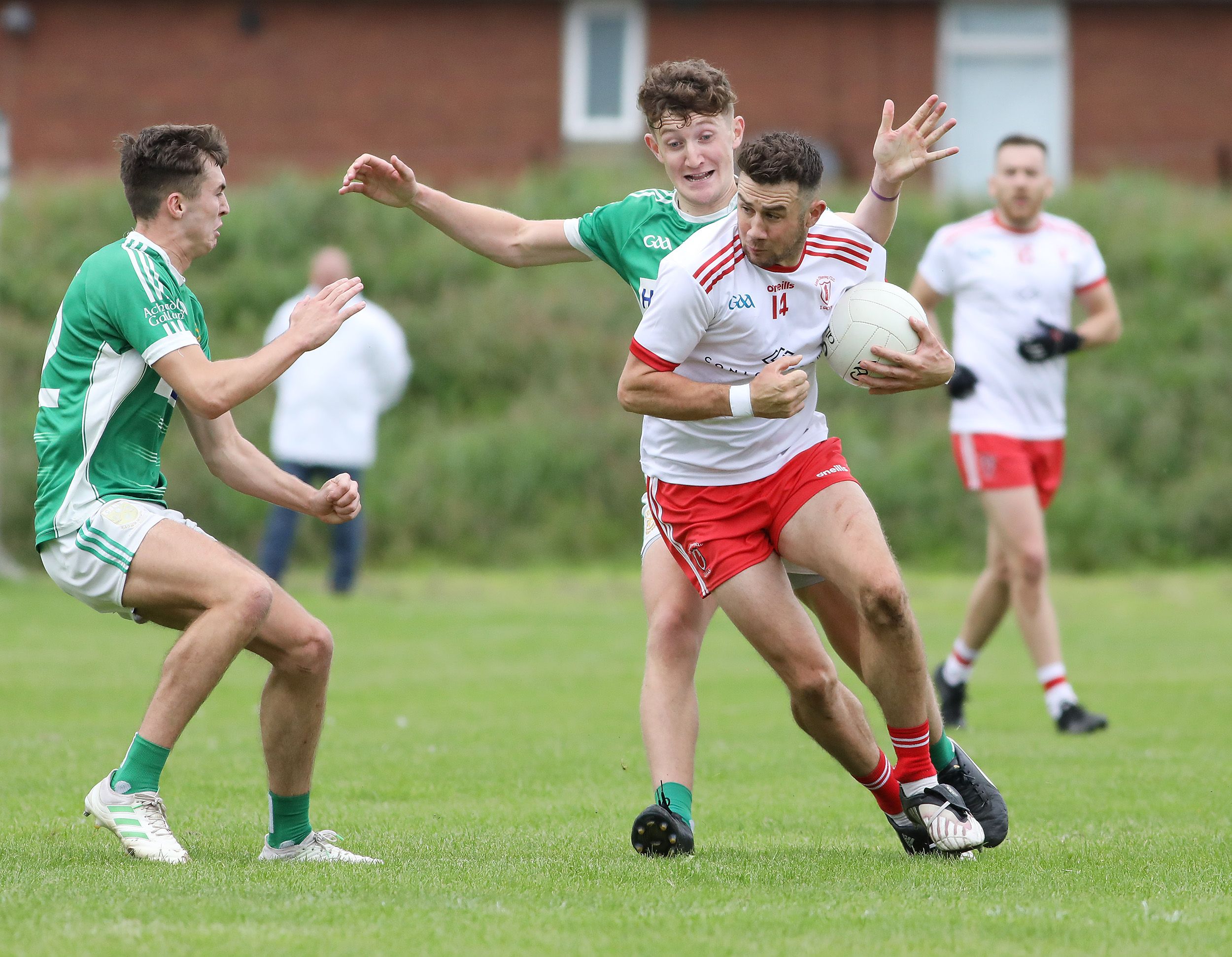 JUST when it seemed Aghagallon were poised to spring a major shock at Corrigan Park this afternoon, Lámh Dhearg found the answers to edge themselves forward to a semi-final next weekend.

The introduction of Declan Dunne proved to be a masterstroke for Red Hands' boss Máirtín Lynch with his presence helping the Hannahstown men plunder 1-1 late to seal their passage.

Brendan Herron benefitted from Dunne's break to thump a perfect low shot off his left boot into the corner and this was to prove vital against an Aghagallon side who were right in contention right until the last.

The St Mary's men, managed by former Lámh Dhearg manager and player Kevin Murray, got their tactics spot on and shut down their opponents for long stages, but the late switch was to be their undoing.

They hassled and harried Lámh Dhearg, forced countless turnovers with Adam Loughran and Eunan Walsh kicking some fabulous scores, but Lámh Dhearg were pretty solid at the back and when they were threatened, managed to put in the challenges needed and had the benefit of a bit of extra craft in attack through Conor Murray, Paddy Cunningham and the tireless running of Terry McCrudden.

"I knew we needed to do something but it was a bit of a stretch to say I knew what was going to happen," said Lynch of Dunne's introduction.

"We needed somebody who could do something to make a difference at a key stage of the game. He's a six-foot four lad who can play ball and is also clever. He's a goalkeeper in soccer so has a good pair of hands and he showed it there again."

This was a game that took a while to settle despite Loughran kicking Aghagallon into an early lead with a fine score on the run, but the free-takers took over as Gareth Magee and Cunningham had their own person duel with the scores tied at 0-3 on 11 minutes.

Lámh Dhearg did carve out the game's first goal opportunity when a quick exchange of passes saw Marc Jordan fed an inviting ball across goal for Brendan Herron to turn home, but Aghagallon goalkeeper Luke Mulholland scrambled it clear with Ryan Murray's follow-up shot for a point blocked and cleared.

The Hannahstown side did nudge ahead by the water break when Jordan picked out McCrudden beautifully to score, but the nip-and-tuck nature of the opening half continued. Magee kicked three frees for Aghagallon who could also have had a goal only for Eunan Walsh to lose his footing when played in. Points from Ryan Stranney and Ben Rice came in this spell with the teams level again and that was the case at the break as Walsh kicked a beauty off the outside of his boot and Conor Murray replied on the stroke of half-time when curling over from the right sideline to leave it 0-7 apiece at the change of ends.

Lámh Dhearg found themselves temporarily down to 14 straight after the break when Ben Rice was black-carded for a trip on Adam Loughran, but Aghagallon could only muster two Magee frees in this period before Cunningham responded with one of his own from distance before the water break.

Declan Lynch then picked out Conor Murray who slung over another beauty to tie the game, but with seven left Kieran Hamill broke through at the other end only to see his rasping drive whistle over the crossbar.

The shock seemed to be on, but enter the imposing figure of Dunne who went straight to the edge of the square on 55 minutes and immediately, Cunningham punted a high ball in his direction as he made a nuisance of himself, broke it after his and Aghagallon hands fought to take a grip, but it was knocked out left to Brendan Herron and he sent an inch-perfect shot across goal and into the corner of the net.

Magee kicked a free four minutes into stoppage time to leave just one in it, but again Dunne's impact was to be felt as he took down a high ball, fed Ryan Murray who squeezed his shot inside the posts to give his side breathing room.

Adam Loughran did hit back with an exceptional point at the other end, but time was up as Lámh Dhearg booked a semi-final meeting with either Cargin or Rossa on Saturday.