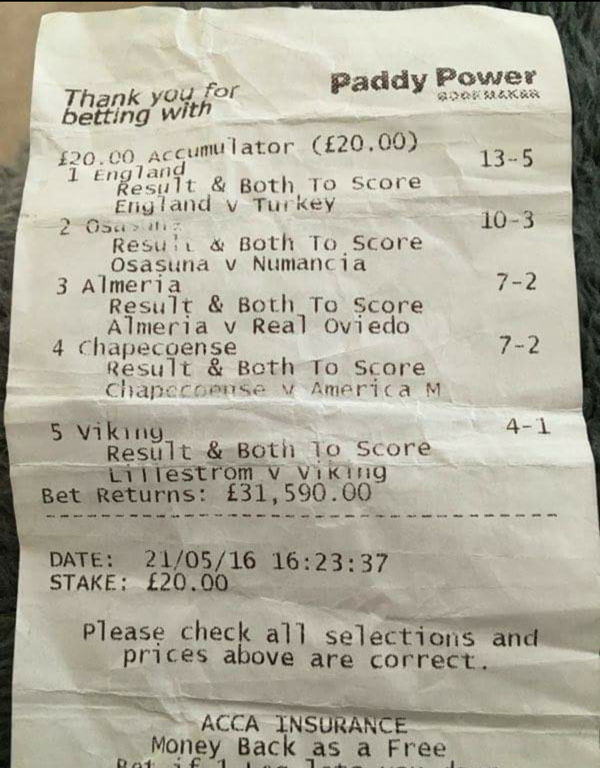 BET OF THE WEEK
We start with a cracking bet with one local punter taking Paddy Power for £31,590.00 with a £20 winrush bet on Sunday.
He is either a expert on Norwegian, international and Spanish football or he just winged it.
If it’s for you, it’s for you and that late England goal proved it for this lucky punter who won a bet that we all can only dream of getting - fabulous punting.

CHAMPIONS LEAGUE FINAL
Another weekend of finals looms with the Champions League final at Milan's Stadio San Siro on Saturday night as well as a weekend of play-off finals at Wembley to look forward to - so a busy soccer weekend ahead.
We start in Italy and the Champions League final on Saturday night where we have a repeat of the 2014 final with Spanish sides Real Madrid and Atlético Madrid locking horns once again in what looks another epic and tough final to call.
Diego Simone’s side came within seconds of lifting the trophy in Lisbon two years ago, but were thwarted by a Sergio Ramos 93rd minute equaliser. That killed them and Real Madrid took them apart 4-1 in extra-time.
Expect another tight game come Saturday night and the draw at 12/5 looks the easy way out in this one with a 1-1 draw the bet for us at 11/2.
Ronaldo as usual will have his supporters for the opening goal at 4/1 but we are thinking big with Atlético captain Diego Godin who opened the scoring in Lisbon two years back and looks decent value for first and last goal at 25/1 - to score anytime is 10/1.
Also worth a punt is both teams to win on penalties at 9/1.

PG DRAW TRIXIE
On to the Playoff finals at Wembley for the weekend draw trixie and we start with the Championship final on Saturday evening (5pm) with Hull squaring up to Sheffield Wednesday. Again, this is another tough game to call and the 11/5 about the draw looks the way to go in this one. Again we will be punting on both teams to win on penalties at 9/1.
On to Sunday and the League One final. This is another tight game for punters to work out as Millwall and Barnsley prepare to battle for a Championship spot next season and again we sit of the fence in this one and take the draw at 11/5.
To make the draw trixie up at the weekend, we head back to Wembley on Monday for the League 2 final. Once again it looks another tight one to call with little to separate Plymouth and AFC Wimbledon.
The draw treble pays around 35/1 for the weekend and it’s around 11/1 the double in the trixie.

Saturday Racing
Home of the Brave (9/2) could be the answer in the Group 2 Timeform Jury Stakes (3.10), while Log Out Island (9/2) can follow up that Newbury romp with victory in the Group 2 Sandy Lane Stakes.