Local soccer takes first steps on its road to return 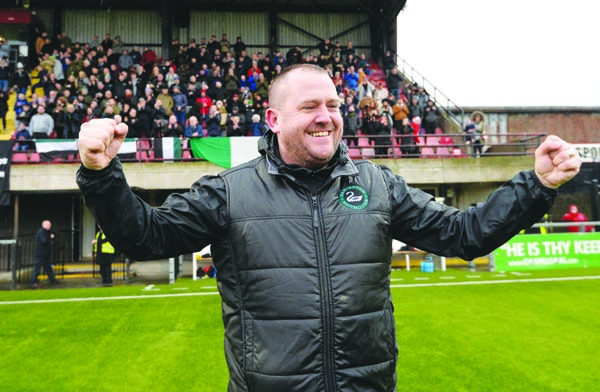 NEWINGTON are set to resume collective training following the publication of the IFA’s return to play protocols, but manager Conor Crossan insists the club will leave it up to the players to determine if they want to return.

The Irish football season has been on lockdown since mid-March following the global Covid-19 pandemic, but some sports are gradually beginning to resume.

At the weekend, the Irish Football Association published its guidelines stating that from Monday (June 8), non-contact group sessions can take place.

The rules states that groups must be kept separate, everyone must be social distancing and strict hygiene measure must be in place.

Anyone who has shown flu-like symptoms or been in contact with a known or suspected case of Covid-19 in the past 14 days must not attend training.

Although Crossan says some of the guidelines will be tough to adhere to, he is relishing the prospect of beginning the journey of getting back to football on a Saturday.

“We have our first session back on Saturday and we have four coaches to take the team,” said Crossan.

“We’ve left it down to the players and how they feel about the situation themselves. We are trying to make things as safe as possible and we’ll stick to the guidelines as best we can.

“I put the idea out there to the players before I organised anything and the majority are happy to come back, but two or three have expressed reservations and that’s totally up to themselves. I am not going to force anything on them.

“I think it is important we do get back sooner rather than later – it will be good to get everyone back together on Saturday and remind us what we’ve been missing.”

The return to training for local teams came just days ahead of a final decision from the NIFL clubs regarding the current season, that is due to be made today (Friday).

On Tuesday, English football’s League One and League Two voted to end their season with tables settled on points per game with promotion, relegation and the play-off retained.

The same format was used to settle the Ballymena and Provincial League with Dunloy FC being crowned champions ahead of St James’ Swifts and Belfast Celtic.

Newington are set to face Belfast Celtic in the last four of the Intermediate Cup with St James’ Swifts taking on Dollingstown in the other semi-final tie.

Crossan is adamant that the current season should be finished before the 2020/21 campaign starts, but admits that something will have to give in terms of the fixtures for the forthcoming season.

“We haven’t heard to be honest, a lot of what you do hear is just rumours. The IFA are probably waiting on advice from the government as well,” added Crossan.

“They are set to make a decision on June 30 with regards to how the league should finish.

“Until we know exactly what is going to happen, we just have to prepare as best we can.

“I think the season should be finished regardless.

“Next year something might have to give – it may be the case that amateur and intermediate teams aren’t permitted in the Irish Cup and maybe the League Cup is done away with.

“You love getting a run in the Irish Cup, but if it saved the season then so be it. It is going to take the world time to recover from this and football will be no different.

“To be, it is more important to finish this season than starting a new season.

“If they scrap this season, that means the Intermediate Cup is gone too and I wouldn’t want to have an Intermediate Cup semi-final as our first competitive game back. You’d ideally want a few league games first.”