London calling for Gilroy and Ulster 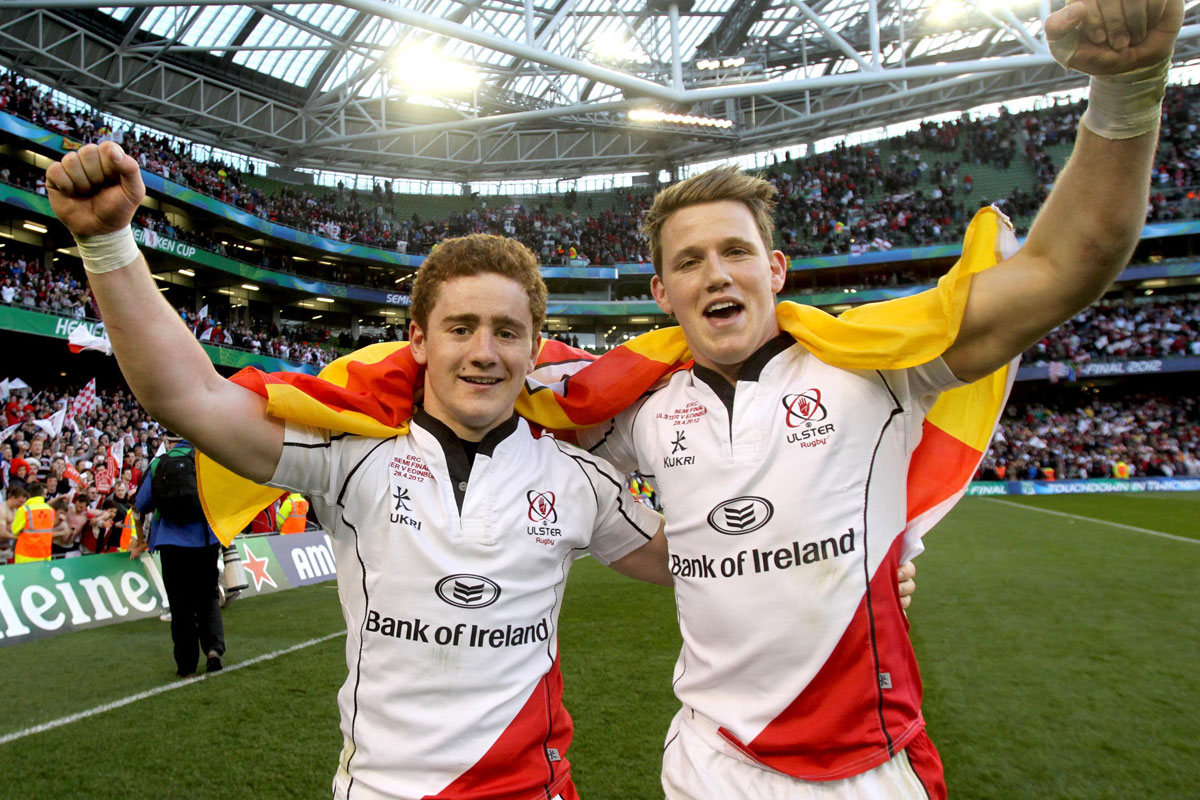 LONDON is preparing for an Irish invasion as supporters of Ulster and Leinster will arrive en masse for the Heineken Cup final on May 19.

The pair booked their tickets for the English capital thanks to their respective semi-final wins at the weekend and while Leinster will be seeking back-to-back European titles, for Ulster this will be their first appearance in the final since their only win in the competition when they defeated Colomiers 21-6 in 1999.

Craig Gilroy was just eight-years-old during that triumph and the former Gaelic Footballer with St Paul’s in Holywood admits that while he can’t remember that game, stepping out on final day this year will be a dream come true.

“It means so much. Getting into the Heineken Cup final for the first time since 1999 hasn’t really sunk in,” said the winger.

“We have put up some great performances this season and there have been some shabby ones.

“I don’t think we have produced our best yet but hopefully we can show that on the 19th.”

Saturday’s 22-19 semi-final win over Edinburgh at the Aviva Stadium was Gilroy’s second outing at the Dublin venue having had the honour of playing in an Ulster/Leinster v Munster/Connacht U20 representative game that marked the opening of the redeveloped Lansdowne Road.

Indeed, the former Methodist College student scored the first try on that day and one man who played alongside him on both occasions was Paddy Jackson. Gilroy admits the occasion was that bit different for the pair at the weekend.

“It was a completely different atmosphere. All I could see was the Ulster badge and flags everywhere,” added the 21-year-old.

“It moved you and almost made you a bit emotional but it was great to be back with Paddy Jackson.

“It’s easy to let the atmosphere get the better of you and I felt that happened over in Clermont. Every game you play in those crowds is an experience and Twickenham will be something else – I’m looking forward to it.”

Twickenham will indeed be a unique occasion and one that Gilroy is looking forward to.

Standing in their way will be a Leinster side that are seeking to claim their third European title in four years and has class in abundance.

The sides met just two weeks ago in the Rabo Pro12 and Joe Schmidt’s side returned south with the points following a 16-8 win. However, an understrength Ulster could take some confidence from that game.

Leinster just about fended off the challenge of Clermont Auvergne 19-15 in their semi-final and while Gilroy admitted that whoever they were to face in the final would provide tough opposition, Ulster firmly believe they can cause an upset.

“They are two of the best teams in Europe so whoever we got was always going to be a challenge,” said the try scorer from the quarter-final against Munster.

“You saw the game yourself, the nerves were shattered but it’s Leinster in an all-Irish final so it ought to be a great game.

“If there is a time to start beating them it’s in the Heineken Cup final. Leinster are a fantastic side and they have an arrogance about them which is well deserved.

“It’s sometimes hard to beat that on the pitch but they have a lot of faith in themselves.

“Their whole squad is incredible and their back line is superb.

“We are definitely going to have to put in one of our best performances but then in the final anything can happen.

“You saw against Edinburgh in the league, we beat them twice with bonus point wins, but then on Saturday we were rattled.

“We definitely believe we can win. When we are full strength like we were against Munster we showed that we are one of the best sides in the competition.”

The final will be Ulster’s next meaningful game as their trip to Thomond Park for Saturday’s final league fixture is something of a dead rubber as they can no longer qualify for the play-offs.

That is not an ideal scenario admits Gilroy and one they believe should not have been the case but it does allow them to rest key players as Brian McLaughlin begins to plan for Twickenham.

“Leinster will have to use guys in both the competitions but at the same time we would like to have been in both and we could have been.

“There are a few regrets and down in Connacht we should have won the game. People think we should have sent down a stronger team but even with the team we had it should have won. That messed things up for us but these things happen and now we have a huge game to look forward to so that makes up for it.

“I don’t know what Brian’s going to do but it could be a huge opportunity for some of the younger academy guys to show what they can do.

“Hopefully watching the semi-final on Saturday will inspire them and looking at me and Paddy Jackson can inspire them too because they will see there is a chance of starting in the team regardless of your age.”