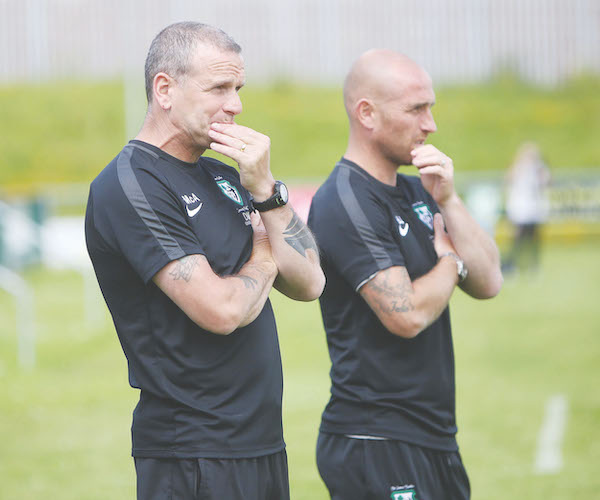 PACKIE McAllister is to take an indefinite break from football after stepping down as joint-manager of St James’ Swifts.

McAllister was joint-manager of the Swifts this season alongside former Cliftonville star Barry Johnston having previously coached Sport and Leisure Swifts (now Belfast Celtic) while he also had two spells in charge of Donegal Celtic.

The duo guided the West Belfast club to a second-place finish in the Ballymena and Provincial League behind winners Dunloy FC – although a mathematical formula was used to determine the final standing in the wake of the Covid-19 pandemic.

It is understood Johnston will now assume the managerial role on his own while McAllister said he is relishing spending more time with his family after spending three decades in local football as a player then a manager.

“It has been playing on my mind since the start of lockdown,” said McAllister.

“I haven’t really missed football and it is purely down to family reasons.

“I have no other offers and I don’t want to get involved with another club.

“To be fair, Janty (Barry Johnston) did most of the managing last year himself and took more of the coaching side of things which suited both of us.

“This is purely my decision to step away from football. I’ve been doing the same thing for 30 years now – getting up on a Saturday morning and being away all day. I want to try something different.”

McAllister stressed that the decision to step away is solely his own and that he departs St James’ on good terms with everyone at the club.

“There’s no better time for me to step away,” he added.

“I already had good friends at the club, but I’ve never known a group of players like them. Everything I’ve asked them to do they did – they were smashing.

“I’m going to take more time for my family. I’ve a granddaughter now who is six and half years old. You say to yourself ‘where has the time gone?’ and I want to spend more time with my family.

“I don’t think I’ll be the only person re-evaluating things.

“From the owner, the chairman and right down to the girls who made the tea, I’ve got on well with every person at the club. This is nothing to do with St James’ – it is about me doing something for myself.”

While he leaves on good terms, McAllister remains frustrated at how this season ended for the club.

The Ballymena and Provincial League, like the NIFL, opted to use a somewhat controversial mathematical formula to decide the final league table, rather than extend the current campaign into the summer months.

As a result, North Antrim side Dunloy FC were crowned champions having built up a 21-point lead at the head of the table.

However, both St James’ Swifts and Belfast Celtic, who finished second and third respectively, both had games in hand and could have overhauled the league-leaders and McAllister is expressed his opposition to how the league was decided.

“It is unfortunate the way things worked out because I still think we had a good chance of wining the league,” stated McAllister.

“I totally disagree with the decision. You can’t mathematically award somebody a title. I’m a big Celtic fan and I wanted Celtic to do it on the pitch as well. These decisions are taken out of your hand. Dunloy were well up there and there strong favourites, but we just felt we were on a strong run and we had some of our big players coming back.

“We felt we would have pushed them all the way and I’m sure Belfast Celtic felt that same.”

McAllister believes the West Belfast outfit is well-placed to go on to bigger and better things as they continue to push towards Irish League football.

He also reiterated his backing for Johnston and hopes the former Cliftonville ace will fulfil his potential as a top manager.

“We are still good friends - he (Johnston) was disappointed with my decision and wanted me to stay on,” said

“I stood back and watched him develop last year and I still think one day he will become one of the top coaches in the country.

“There’s no doubt in my mind Janty is ready to take the club to the next level.”

“I said I would still lend a hand to the club or to Janty, if he wanted me to go and watch a game or something like that.

“Everything we asked for from day one, we got. I couldn’t have asked for more from the players or the club. The professionalism at the club was superb. We tried to bring them to the next level, but there were already some great people at the club.”

McAllister may make a quicker than expected return to the sideline, however, if the IFA give the green light for the Intermediate Cup semi-finals to proceed.

While the Irish Cup semis are scheduled to go ahead later this month, there has been no indication as to whether or not the Intermediate Cup will go ahead.

St James’ Swifts are set to set Premier Intermediate side Dollingstown while Belfast Celtic renew rivalries with Newington in the other semi-final.

McAllister said he would return for the semi-final and, potentially, the final, could the competition be completed, but he said he intends his break away from football to be a substantial one.

“The way I feel at the minute, it will be a more long-term break,” added McAllister.

“I’m not going to say that’s me done with football forever or anything, but at this moment in time, I’ve absolutely no interest in going to another club.

“Irish league football and football in general has been very good to me, but I’ve put football ahead of everything in the past and it is now time to put family first.”