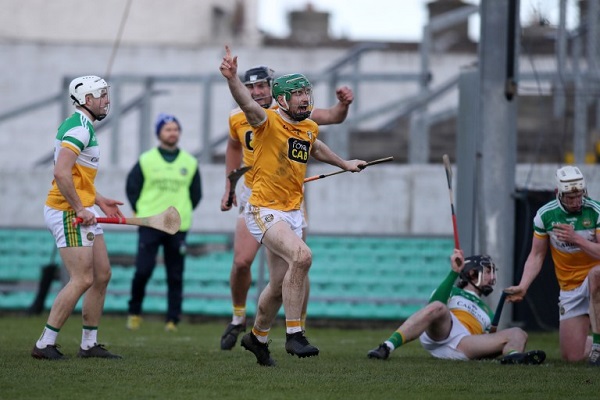 CONOR McCann is relishing the chance of leading Antrim into battle against Kerry when their rescheduled Division 2A league final is given the go-ahead.

Back in March, the Saffrons had been scheduled to face the Kingdom at Croke Park as part of a double-header with the Division One football clash between Dublin and Meath.

Yet, sporting fixtures across Ireland and global ground to a halt in the days ahead of Antrim’s planned trip to Croker.

While high-profile sporting fixtures like the Cheltenham Festival and Liverpool’s Champions League meeting with Athletio Madrid at Anfield went ahead, the GAA took the lead and began postponing games.

Following an announcement at the time by the Irish government to cancel mass gatherings of 100 people for indoor events and 500 people for outdoor events, the writing was on the wall for live sport.

Dublin and Antrim were among the first county boards to cancel club fixtures for the weekend of March 14/15 promoting the GAA to issue an island-wide directive to suspend all club activities until the end of March.

That ban has been in force since mid-March and it remains unclear when restrictions will be lifted in the North with the Irish government setting out their roadmap last week.

The GAA has previously reiterated its commitment to finishing the league programmes in so far as meaningful games are concerned.

Prior to lockdown, both Antrim senior hurlers and footballers were pushing from promotion with Lenny Harbinson’s side needing wins over Wicklow and Waterford to ensure Division Three football next season.

McCann says the hurlers are fortune that they have a league final appearance to look forward to when games finally resume.

“We’ve just been working away individually on our own plans. Everyone is just trying to work away themselves,” said McCann.

It will tell the tale when we do get back to playing –maybe find out who has and who hasn’t been working on their programmes!

“We are working off the idea that we will be back to play that Allianz Hurling League final (Division 2A) against Kerry. Whenever that will be, we aren’t sure yet. We will be different to down South as well because we are working with the government here.

“We are hoping to be back doing something collectively over the coming months and we’ll take it from there. That’s the main motivator for us – getting back for that league final.

“The GAA have made it clear that the important league games will be played before any Championship games.

“We have to try and get ourselves in as good a shape as possible for that final whenever it may be. It is good we have that to look forward to and, hopefully, we’ll get word on it soon so we have some timeframe in place so players know they aren’t training blindly.”

While McCann praised the GAA for their all-island approach to cancelling club activities, he has echoed calls made by his footballing counterpart Declan Lynch for the association to help ensure southern counties aren’t given a head-start when it comes to resuming collective training.

“That’s something that is in play at the minute,” added McCann.

“We seem to be working a week or two weeks behind the south at the minute. In fairness, that timeframe appears to have closed and the two governments seem to be coming to some form of an agreement and are working together.

“In fairness the GAA have been really good throughout as they closed things down first and they made the decision and others followed suit.

“Hopefully, if we get the go-ahead from Croke Park, that will be across Ireland and not just for those south of the border.”

Meanwhile, McCann has stressed that his native Creggan Kickhams remain hopeful that the 2020 Ulster U21 Club Football Tournament will be completed this year.

Along with a host of other fixtures that were cancelled on Sunday, March 15, Creggan had been due to host a double-header with Dungiven (Derry) facing St Eunan’s (Donegal) in the first semi-final followed by the meeting of Carryduff (Down) and Clann Éireann (Armagh) in the second semi-final.

The competition had already been moved from its traditional start date at the end of January due to the Sigerson Cup and the U20 Football Championships starting earlier this season.

While the long-term future of the tournament remains uncertain, the Creggan club remain committed to finishing this year’s renewal.

“The priority is to get this year’s tournament finished. It is down to the semi-final stage so all it needs is two weekends really,” said McCann, who is also Creggan’s PRO.

“When it is safe for club teams to be back, if there is a window there, the priority is to get the two semi-finals and the final played.

“We want to get this year’s tournament completed and we will take it from there.

“Obviously, there’s going to be a knock-on after the backlog from this season.

“Prior to this season, it was getting really tight to fit the tournament in with the McKenna Cup and Sigerson Cup taking place at the start of the season. This year, it started in March compared to January in previous years. Long term, it is going to be difficult to keep doing what we are doing this season.

‘Hopefully, there is a gap for it and people see the benefit of it because the quality of the football is unreal. I think that’s why so many people come and watch it and there’s such an interest in it.

“All the clubs are keen to play and it really does help them. You only have to look at the teams that have played in the tournament and have gone on to better things. We’ll hopefully find a window for this year’s tournament to be finished and then we’ll go back to the drawing board in terms of next year’s tournament.”