McComb confident he can make his mark in Ukraine 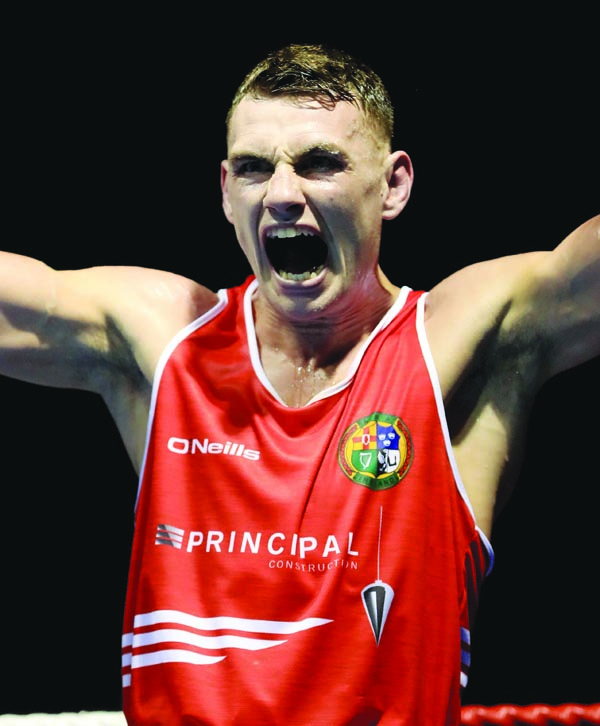 SEAN McComb believes he is the man to beat at 64kg when the European Elite Boxing Championships begin in Kharkiv, Ukraine on Friday.

The Holy Trinity man has been in flying form this year, capturing the Irish Elite title in February and at the end of April, scored three wins out of three in a round robin competition in Dublin, one of those victories coming against reigning world champion and Olympic bronze medallist, Vitaly Dunaystev.

The switch to light-welterweight has certainly paid off so far for the Turf Lodge man who revealed his preparations were hampered having been involved in a car accident, but says he is ready to go and is fully confident he will medal in Ukraine.

“This is the year where I show people how good I am,” he said.

“I have said it before, I have the experience, but this time is showing my full potential. I beat the world champion a couple of weeks ago.

“Going into these European Championships, people are going to be looking at me and thinking ‘I don’t want to fight him’. It maybe was the case before because of my size and my awkwardness, but more so now because it’s all coming together.”

Despite his good form, McComb has had to contend with the loss of funding after the IABA’s budget but cut by Sport Ireland to the tune of €200,000 back in April.

That obviously has made his preparations all the harder as he has been expected to get by with little to no income ahead of these Championships, but a medal next week will see his funding restored and he intends that to be the case and is eternally grateful to all those who have helped him out.

“It’s hard to survive without funding,” he agreed.

“Family and friends, my girlfriend and the club have helped me out. I don’t know how I got by, scraped by to be honest. I had a wee bit of funding left over from last year from Sport NI and I lived off that, but it’s running out, so it was left to my parents and girlfriend to help me out.

“It makes me a wee bit more determined to go out here and get to the finals. If I get to the podium, that gets me onto the top funding and it means I can repay the people who have helped me out, from the club right down to my family, girlfriend, my granny and granda who have always helped me. It would be great to get that gold medal and help them out after everything they have done for me.”

It’s not just funding that is the prize on offer here, as these European Championships are the gateway into August’s World Championships in Hamburg with the eight quarter-finalists going forward to the Worlds.

McComb is due to begin his campaign on Sunday and is hoping Friday’s draw is kind so he can get off and running with a solid victory.

“It probably puts that wee bit more impression on me to get to the Worlds, so I will be keen to get the ball rolling,” he confirmed.

“I’m not looking a handy draw or anything like that because nothing is going to be easy at these Europeans, but hopefully it’s not a 50-50 (first). You want to go in and get the ball rolling early with a decent fight.

“Once you do that, you get into a routine and the confidence starts flowing. The rust comes off and everything clicks.”

Irish boxing has been in the spotlight of late for all the wrong reasons with a dispute between the Irish Athletic Boxing Association and Sport Ireland.

The saga has not affected the Irish team however according to McComb who says the boxers are only thinking about one thing and that’s success in Ukraine.

“It hasn’t affected one person, any boxer or any staff. It’s just a stupid thing, I don’t even really know what is going on between the IABA and the Sports Council,” he said.

“I have read all the papers and still don’t know what is going on. There is nothing going on as far as I can see. Pat Ryan (IABA President) didn’t turn up to a meeting, but that’s his problem, nothing to do with boxing. I can’t see how that affects us at all.

“The whole IABA, from Fergal Carruth (IABA CEO) to Pat Ryan, they don’t be near us at all. What’s going on between them and Sport Ireland will not affect us at all.”

One thing that looked like it could disrupt McComb’s preparations was that car accident and he admits he was unable to train fully prior to heading for the team’s training camp last week, but the 24 year-old says he is now feeling much better and ready to go this week.

“I’m fed up training, so I’m just looking forward to fighting,” he reports.

“I have been flat-out since January and was in a car accident so I have hardly trained from it.

“I was only able to do a few exercises because of a sore neck and getting sore head. I had been doing a few things with the physio, so I was feeling down and not myself. I am just glad to get away now into a different environment and getting going. I’m flying fit, it was just my mood, but I have started to come back into myself now and I’m ready to go.”