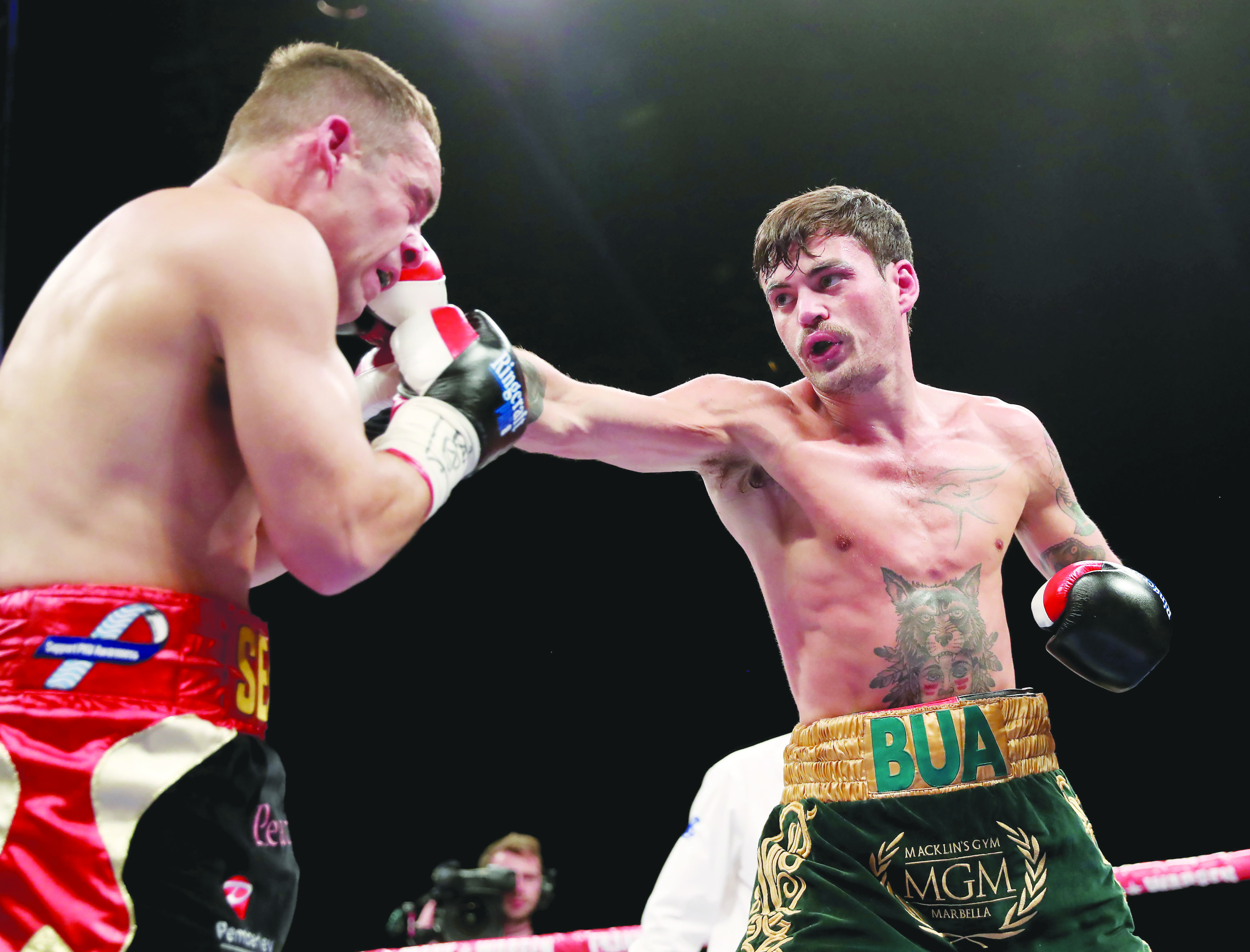 TYRONE McKenna insists he is willing to fight anyone as he sets his sights on some major bouts in 2017.

This Friday night, McKenna will take on undefeated Dubliner Jake Hanney at Belfast’s Waterfront Hall. While he isn’t taking the challenge of Hanney lightly, McKenna is hoping to get a title fight later in the year and perhaps finally get in the ring with another highly-rated Dublin native.

“I want to push on. Everyone is talking about the Phil Sutcliffe fight,” said McKenna.

“He is fighting Josh Leather in May so that will put a delay on it. I would be looking for an Irish title or a ranking belt.

“I would be happy to fight the winner of Josh Leather and Sutcliffe. I don’t want to fight any bums.

“I have been fighting undefeated fighters in my last three fights - that shows I am not afraid to fight anyone.”

On his opponent for Friday, McKenna added: “I haven’t seen any videos of him (Hanney) or anything, but my coach Danny Vaughan used to train him for a few months.

“He has knowledge of what he is like. I am expecting a tough fight if he is undefeated.

“I don’t think anyone at my weight trains as hard as I do. I have had unbelievable sparring. I am expecting a tough night but I am expecting to win.”

While a sparring session with former world champion Miguel Cotto never materialised, McKenna insists the trip was a worthwhile venture.

“I got good sparring out there and the weather was great so it was well worth it,” said McKenna.

“We were planning to go to LA and get sparring last year and now that Michael (Conlan) is based out there we were able to get things set up.

“We went to the Wildcard Gym first and it was just packed out. It was hard to get a bag and there wasn’t much room.

“I was meant to spar Miguel Cotto but, when I turned up, he only needed two guys and he thought I was too tall. We were meant to do a day in Freddie Roach’s gym and a day in Mick’s gym but we decided to do the whole camp in Mick’s gym.

“They had two big rings and loads of bag and pads. The quality of sparring was first class. They have three world champions there. The talent in the place was unbelievable.”

McKenna will be hoping to advance his growing reputation and an undefeated record this weekend. Last time out, he proved too good for Dublin’s Sean Creagh in the Titanic Exhibition Centre.

Creagh’s pre-fight interviews led to some bad blood between the fighters but it soon became clear that Creagh didn’t have the tools to back up his words.

After a frantic opening round, McKenna settled into the fight – keeping Creagh at range and picking off his shots with ease. Creagh retired on his stool after the fifth round and McKenna stated that his fitness helped him to a comfortable victory.

“I was insanely fit for that fight so I was pretty confident,” added the Belfast boxer.

“He was doing all the talking – I think he was trying to entice me into a war. That’s the only way he knew he would stand a chance.

“It kind of worked for the first two rounds before I settled in and the boxing came to the fore.

“He couldn’t live with it – it was me setting the pace and that threw him as well.”

The aforementioned boxers will all be in action again on Friday night but McKenna believes this Box Nation bill tops the last one held in Belfast due to the quality of fights taking place.

“I think this bill is better than the last bill,” said McKenna.

“You have Declan Geraghty fighting Tennyson – that’s going to be an unbelievable fight.

“That could go either way. I am fighting another undefeated Dubliner. “Paddy (Barnes) is doing his first eight-rounder.

“Jamie is fighting for the WBC International Silver title “Then you have Lewis Crocker making his debut. He is a very exciting welterweight.”