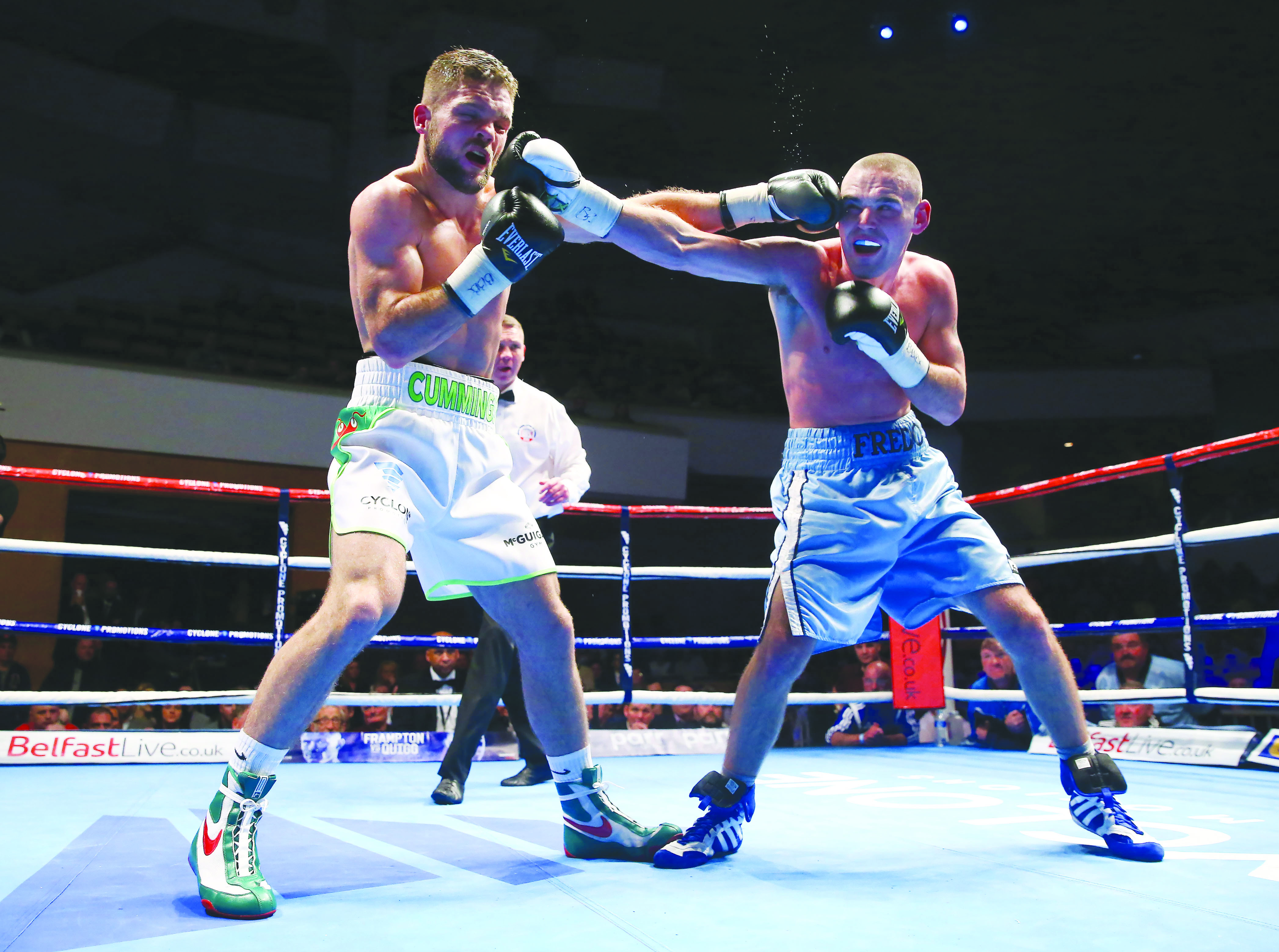 Alfredo Meli in action against Conrad Cummings when the pair fought out a thrilling draw at the Waterfront Hall in November. Photo by William Cherry

ALFREDO Meli says he is read and raring to go as he prepares to take on Sam Sheedy at Sheffield’s City Hall on Saturday night in an eliminator for the Commonwealth middleweight title.
‘Fredo’ last boxed back in November when he and Conrad Cummings served up a thrilling draw at the Waterfront Hall in a Celtic title fight, but the West Belfast man came out of that contest with his reputation enhanced.
This weekend, he travels to Sheedy’s back yard in what looks like another step up for the Immaculate-based southpaw.
On paper, there looks little to choose between them.
At 25 years-old, Meli (11-0-1, 3KOs) is two years his fellow-southpaw’s junior but Sheedy (16-1, 4KOs) holds an ever so slight height and reach advantage. Both men have gone the distance in the majority of their fights, but the Sheffield man is coming off a first round knockout victory over Frank Dodze having lost for the one and only time in his previous outing, a split decision against Navid Mansouri for the English light-middleweight strap.
It is a certainly a risk for Meli to take this contest away from home, but the Ballymurphy man says he didn’t have to think twice when the offer was made.
“You shouldn’t really be wanting to hang around,” he said.
“You would always want to take the step to the next level. It was one of those ones where I was offered it and I was like ‘yeah, get it done’ because this is a step up to that next level. I’m not interested in hanging about the same level. I want to go as far as I can and as quickly as possible.
“Hopefully I can take this chance with both hands and take it home.”
Back in November, he had boxed his way into a clear lead on the cards against Cummings despite suffering an early knockdown, but tired down the stretch with the Coalisland man’s full-time training coming to the fore as both men had to settle for a draw.
Boxing is not the be-all and end-all for Meli who works full time as a mechanic and has said on a number of occasions he has no interest in changing that, but he has still stepped up his preparations for this weekend.
“Preparation has been good. The only thing I found hard was getting sparring, but I got a few boys in that would work with me,” he reports.
“It’s really hard to find southpaws for sparring.
“I have started to step the training up a bit ahead of this one so I will be able to do the 10 rounds easy.
“I have been training hard and I’m looking forward to proving I can do those 10 rounds and be at that level at a high pace. I’m confident as always but then you have to be confident in the ring. If you’re not then you are in big trouble.”
Meli is not one for spending countless hours studying videos of opponents.
Instead, matter-of-factly he says that the only thing he is concerned about is getting himself into the best condition possible.
He acknowledges it could turn into a tactical battle against a fellow southpaw on Saturday and says fighting away from home is not a problem.
“It doesn’t matter to me where I fight in,” he stressed.
“I’m just looking forward to this now as I always do.
“He is a southpaw like me, but apart from that I don’t know much about him. I never really look into it,I just get ready and that’s it. I’m not one of these boys who looks into the opponents he fights, I just see what he is about a bit and that’s it.”