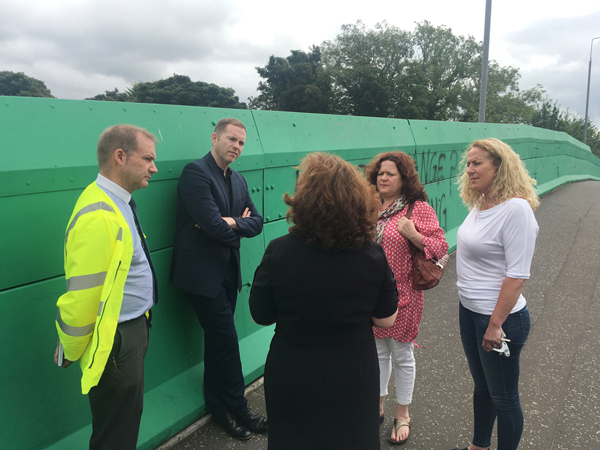 HOPES are high that progress on the eyesore Finaghy Bridge is on the way after a visit to the site by the Minister for Infrastructure.

Minister Chris Hazzard made a stop at Finaghy Bridge whilst on a tour of South Belfast hosted by the Minister for Finance, South Belfast MLA Máirtín Ó Muilleoir, and South Belfast Councillors Deirdre Hargey and Geraldine McAteer.

Minister Hazzard met with the local reps and residents, who conveyed their dissatisfaction at the ugly appearance of the bridge and pressed for action to be taken.

The bridge has been a bone of contention for residents, commuters, pedestrians and motorists since 2009 when the attractive red brick was replaced by green metal sheeting during fortification work on the structure. It has been dubbed ‘Ireland’s ugliest bridge’ and has often been likened to a military installation from the dark days of the Troubles.

Councillor McAteer said: “I was pleased that the Minister made it his business to visit various physical infrastructure projects in South Belfast, but delighted that he spent some time on site at Finaghy Bridge.

“The Minister could see clearly for himself how unsightly the bridge is. He told us that a key priority for him is to maintain the safety aspects of the bridge, but he agrees that there is a need to change its appearance. I advised him that I had secured Belfast City Council support to produce a study for the bridge which would present a number of design options for the bridge. Critical to this would be local community consultation so that people could put their ideas forward.”

Councillor McAteer added: “Minister Hazzard agreed that his Department would become involved in the design process and that he would consider the funding requirements of design options.

“He also agreed to involve other relevant government departments such as the Department for Communities.

“Since the Minister’s visit, I have asked Belfast City Council to speed up the process of putting the design brief out to tender, so that we can develop the design options as quickly as possible and hopefully secure the funding for the works.”

Also present at the meeting was Councillor Deirdre Hargey. Speaking afterwards she said: “We discussed the Tunnels project as the Ministers department own the land. We also discussed the project planning and road issues and raised the need for a residents parking scheme for the area.

“We then visited lower Ormeau and LORAG to look at the potential of extending the centre onto the river and raised the issue of a residents’ parking scheme and we looked bringing forward the proposed pedestrian/cycle bridge over the river from the Gasworks to the Ormeau Park.

Councillor Hargey added: “We also raised concerns around the proposed inner city ring road that would have a negative impact on the Market, Donegall Pass and Sandy Row areas of the city.

“We visited Wellington Park to look at parking issues there and called into the Belfast Islamic Centre to show our support after an outrageous attack on their building with paint being thrown – we wanted to say that racism has no place in Belfast and we stand with them.

“It was a good engagement all round and we will be following up on all the issues we discussed.”