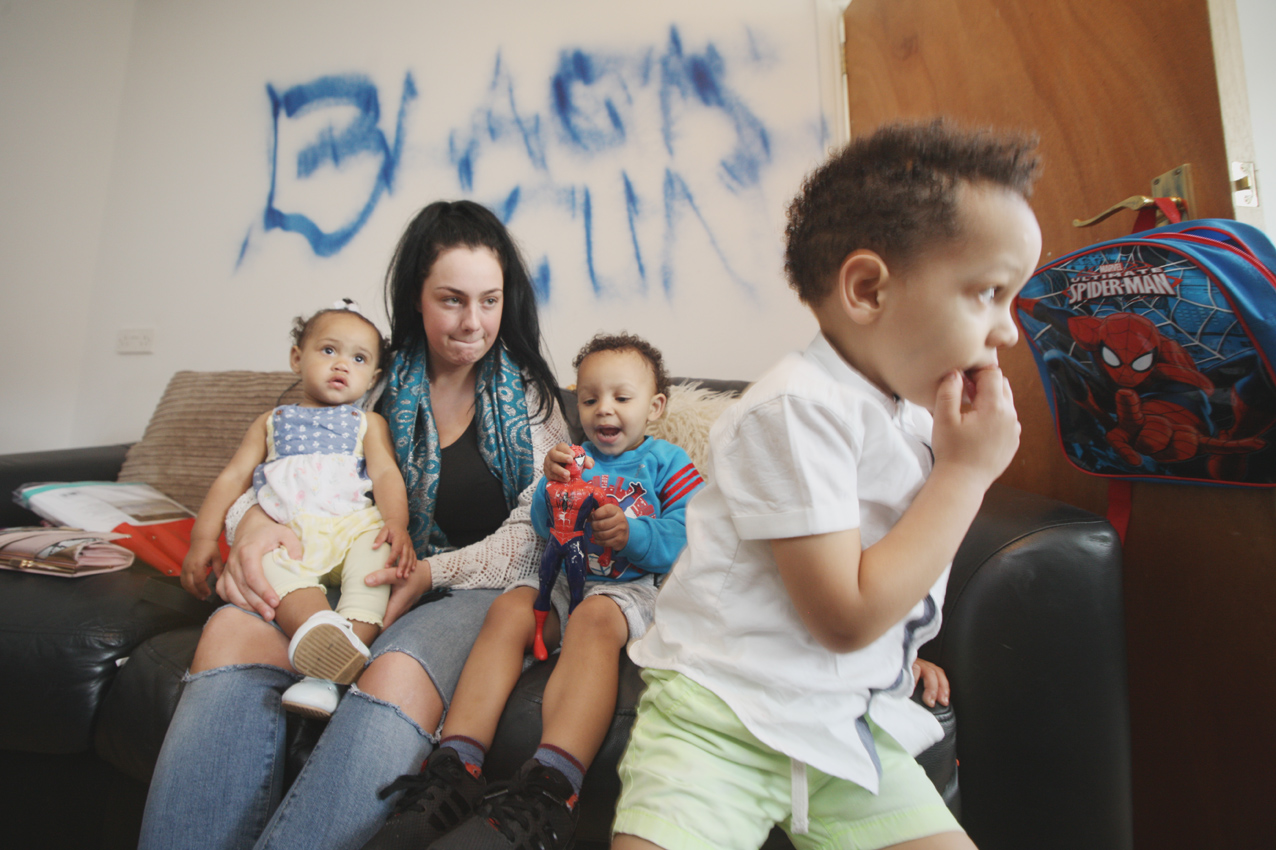 A YOUNG mother-of-three has been forced to leave her North Belfast home after it was ransacked in a racist attack.

Kourtney O’Riordan returned home to her house on the Cliftonville Road last Friday evening to find windows broken, the television smashed and framed pictures of her children destroyed.

‘Black c**t’ and ‘black w****r’ were daubed on the walls of the living room in blue spray paint.

The 19-year-old was back at her home yesterday morning (Thursday) with her three children, Tianna (1), Drake (2) and Christopher Jr (3) along with family-friend, Ann-Marie Mulholland to finish packing up their belongings.

“Last Friday, me and my friend came to the house to get clothes for the kids as I was going to my mum’s for the weekend,” she explained.

“It was around 10.30pm. My friend opened the door we heard the kitchen windows smash.

“It broke my heart when I saw the racist graffiti on the walls. It’s disgusting. It was the fact it was an attack on the kids. Some of their photos on the walls were smashed to pieces. It’s not nice as a mother. At the end of the day they are innocent babies and haven’t done anything wrong on anyone.”

Kourtney, who came here from West Belfast has only lived in her Cliftonville home since January and says she has been left with no choice but to leave the area.

“I’m quite new to the area and I don’t know anyone really. I’m gobsmacked. I’ve never had any trouble with the race of my kids before.

“I can’t stay in the area any longer. It’s unbelievable how someone can destroy my family home in this way.

“I have given up my tenancy. I can’t live here for the kids’ safety. It could have been much worse if we were upstairs but I have no choice but to move out.

“I’ve packed up most of my stuff already to go and live with my mum. The Housing Executive are aware of what happened so hopefully they can help find me somewhere safe to live for me and my children.”

Police say they are appealing for information about the burglary and the incident is being treated as a racially-motivated hate crime.

A PSNI spokesperson said: “Police are appealing for information following the report of a burglary at a house in the Cliftonville Road area of Belfast on Friday, 12 May.

“Sometime between 9.30pm and 10.15pm a house was entered and graffiti spray painted on the hall and living room walls with a distinct blue spray paint. Pictures, chairs and a kitchen window were also damaged.

“Constable Curry would ask anyone who has information about this incident or saw any suspicious activity in the area to contact Police at Tennent Street on the non-emergency number 101 quoting reference 1497 12/05/17. Alternatively, if someone would prefer to provide information without giving their details they can contact the independent charity Crimestoppers and speak to them.

“This incident is being treated as a racially motivated hate crime.”