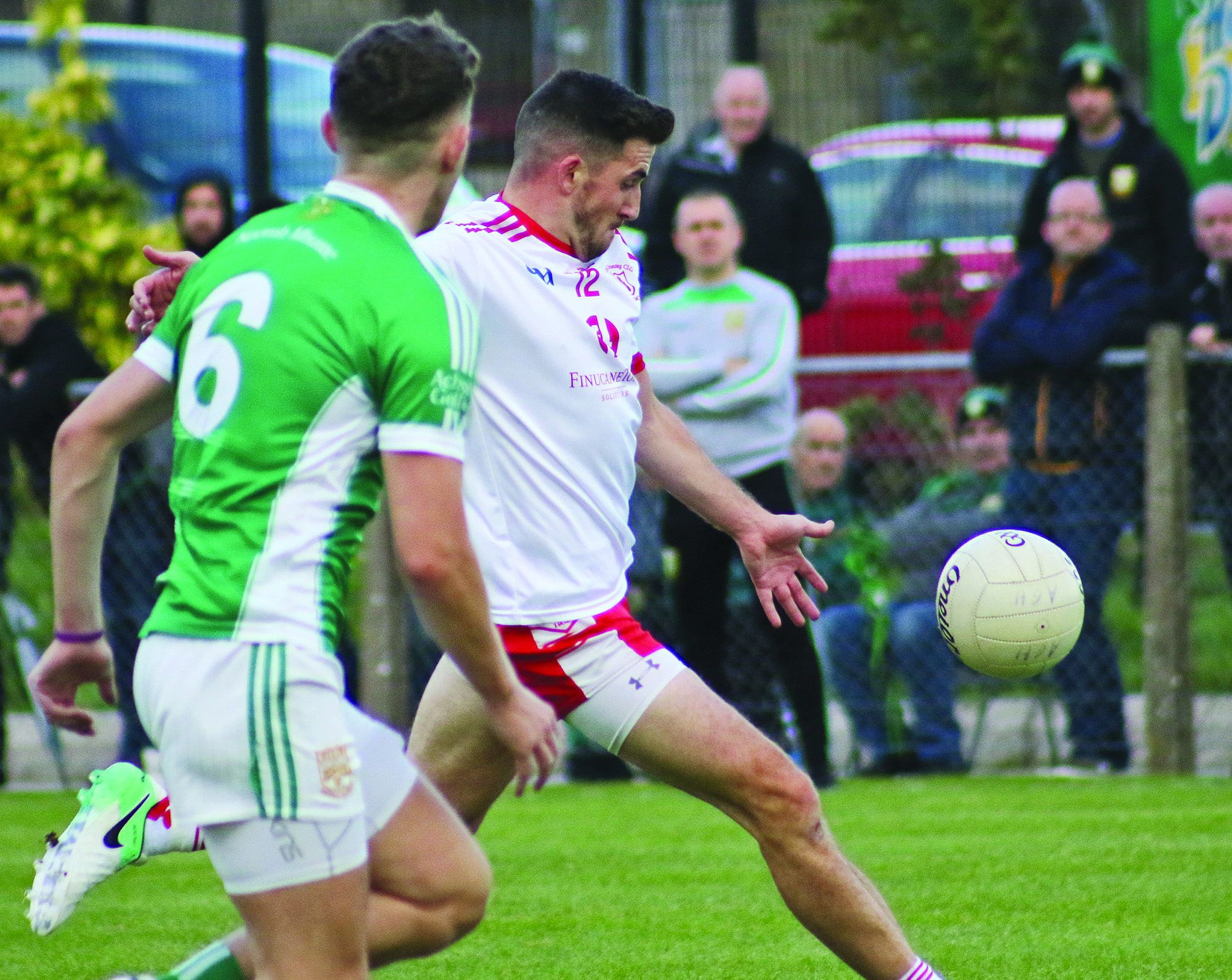 Lámh Dhearg's Ryan Murray, pictured in action against Aghagallon in 2018, and his sibling Conor will try to defeat a St Mary's side managed by his older brother Kevin this Sunday at Corrigan Park

FAMILY rivalries are common place in GAA circles, but the Murray clan will be uniquely divided in opposition this Sunday when Lámh Dhearg meet Aghagallon with a place in the Antrim SFC semi-finals at stake.

Ryan and Conor Murray will line out for Red Hands while their elder brother Kevin is the current manager of St Mary’s.

To make matters even more tense for the family, Brendan Murray, the trio’s father, is kit man and selector for Lámh Dhearg while Kevin’s son Ross, is also part of the opposition’s squad.

It is a repeat of the scenario faced by the family in the first round of the 2018 Championship when, as defending county champions, the Hannahstown men claimed a 2-15 to 0-9 win over Aghagallon at Glenavy.

Lámh Dhearg remain one the leading teams in Antrim having narrowly lost out to Cargin over two thrilling county finals last season and qualified for the quarter-finals with three wins from three in Group Two before tonight’s clash with Rossa.

Yet, Aghagallon are a vastly improved side and will pose plenty of problems for Lámh Dhearg. St Mary’s finished second in Group Three and ran Cargin close last Wednesday night, losing 1-16 to 3-8 at home to the county champions.

Kevin Murray feels his side aren’t that far away from being able to challenge the top sides in the county, but knows they’ll need to step it up a gear to defeat his native club this weekend.

“Probably going into the game, we knew we would have to beat Cargin to have a chance of topping the group,” said Murray.

“We still have one more game against Aldergrove (tonight) to focus on – I haven’t really thought much about the quarter-final.

“We have been trying to build a panel throughout the campaign. Everyone is trying to play catch up in terms of getting everyone game time. I think the county have done a good job with the format and we are building fitness levels with every game.

“This group will work hard all over the pitch and that was evident again (against Cargin).

“They are the county champions and they had their purple patch, but we still kept at them.

“The scoreline maybe flatters us because, without the late penalty, it was probably a bad enough defeat.

He added: “Every game takes its own path and it is trying to get the boys reset when they need to. For us, we will look back at the aspects we can improve upon because Lámh Dhearg are going to be a huge challenge for this group, but we’ll prepare as best we can.”

Brother Conor insists football talk will be off limits if they meet at the family home in the coming days, and he knows Lámh Dhearg face a different challenge to the one posed by Aghagallon back in 2018.

“The way it will work is, when he (Kevin) comes into the house, he’ll not wanna talk about the game, myself and Ryan won’t either.

“My dad (Brendan) helps out with us as well, but my ma will try and break the ice by saying something to get us all to talk. It won’t be anything too serious, but I’ll say Kevin might stay away from the house for a few days leading up to the game.

“Aghagallon are on a young, fast team and they play out quickly from the back and have a couple of very good forwards.

“When we played them in 2018, they weren’t long up from intermediate. They have had a few years at senior level now and they really had a go at Cargin in both games.

“They’ve definitely improved since the last time we played them in the Championship.”

Murray feels last year’s county finalists are coming to the boil nicely as the Championship quickly moves into the knockout phase.

Things have gone well so far since we’ve came back,” added the Antrim ace.

“We had that one league game and then we were straight into Championship. We’ve played well in the groups, but now it is knock-out.

“If it was a normal year, this would be the first round. We topped the group and we’ve got those games under our belt, but it won’t count for anything unless we beat Aghagallon.

“We are playing well at the minute and hopefully that can continue and, fingers crossed, we get all the Championship games played.”

The match-ups for Sunday’s game will be interesting with Antrim skipper Declan Lynch being the most likely candidate to pick up his county colleague Ruairi McCann, who will drift between the middle third and full-forward.

Adam Loughran’s threat is well-known and Kevin Quinn could be dropped back to help nullify the Antrim U20 star while Gareth Magee has been in fine form of late for St Mary’s.

Pat Branagan is likely to remain as sweeper and he will be tasked with trying to limit the supply of ball going inside to Ryan Murray, Paddy Cunningham and Terry McCrudden.

Like Aghagallon, Lámh Dhearg have pace all over the pitch and the direct style of Ben Rice and Eoin McKeown could put Aghagallon on the back foot.

At different stages of last Wednesday night’s game against Cargin, Aghagallon looked dangerous, but their decision-making in attack wasn’t good enough against a more ruthless Cargin side.

Lámh Dhearg are equally experienced at grinding out results and, while the gap between the sides may have closed, the Hannahstown men should have enough to come out on top to leave the majority of the Murray family content.