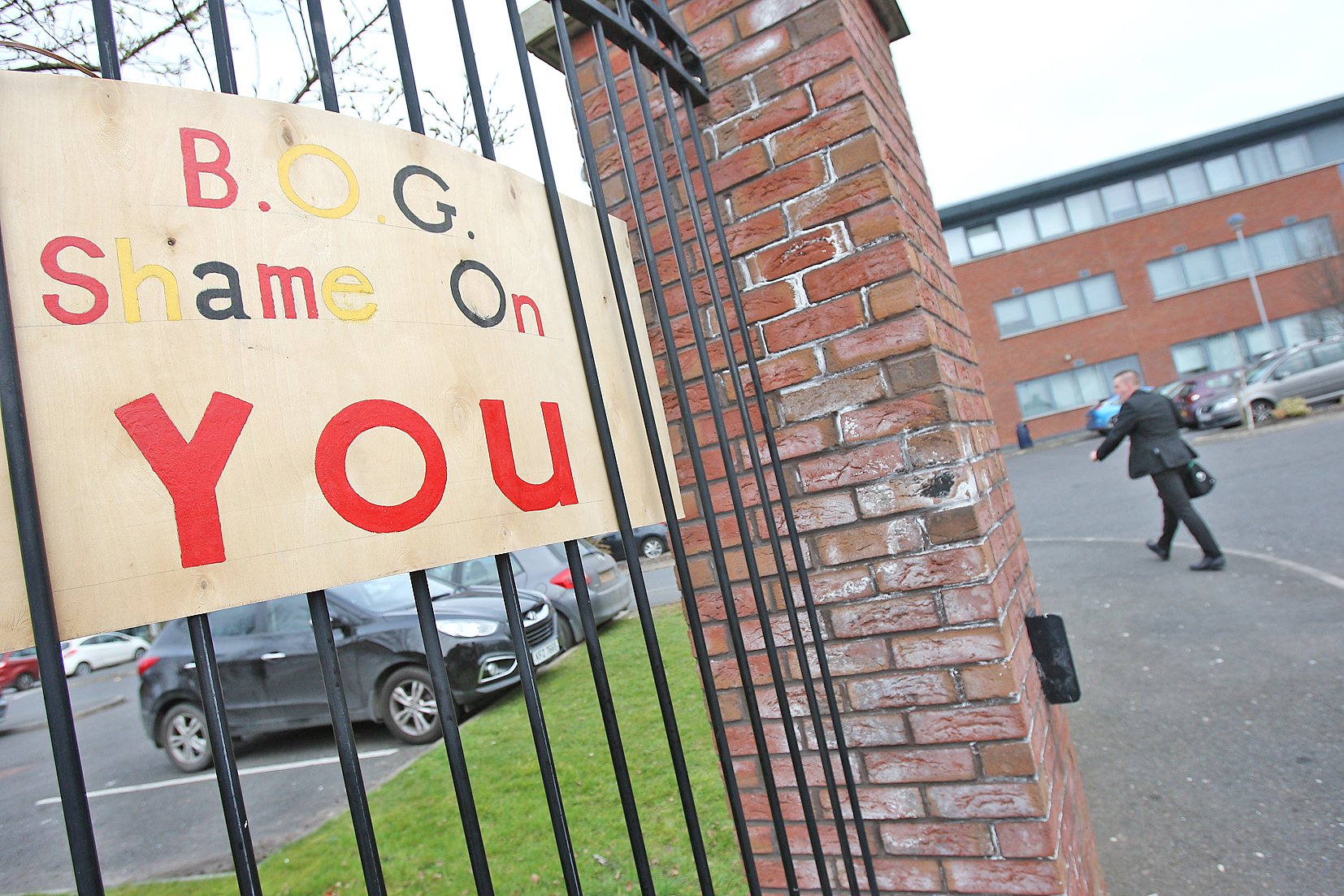 A protest placard at the gates of De La Salle College

The new Associate Principal appointed to help resolve on going unrest at De La Salle College has agreed to meet with concerned parents.

Imelda Jordan, former head of St Colm's, Twinbrook, told parents protesting at the school gates this morning that her main concern was to get pupils who are taking exams this year back on target.

She also accepted a letter from parents asking her for a meeting and gave assurances that one would be arranged.

Ms Jordan will work alongside the current principal, Claire White.

The move comes after Fr Timothy Bartlett, Episcopal Vicar for Education in the Diocese of Down and Connor, called for calm as efforts continue to resolve what he said in a statement were "a range of issues" at the school.

The Concerned Parents of De La Salle group are set to host a public demonstration this evening at Glassmullin pitches at 6.30pm.

Almost 700 people have signed a petition calling for the Principal, Vice Principals and Board of Governors to be stood down in order to “facilitate an independent and thorough investigation”.

Speaking after a public meeting held in Sarsfields GAC yesterday, the protest group said: “We will continue to pursue the truth that has caused this crisis in De La Salle, we remain firm on our call for a full, transparent and independent investigation into all that has gone on in the school.

“We continue to stress that those responsible for this chaos must be stood down with immediate effect to allow for such an investigation to be achieved.

“This committee remains keen to engage with any member of society who can assist in any way that they can. We appreciate the overwhelming amount of support that has been received, this can only help to ensure that each and every child in the school receives the correct safe, effective and compassionate education that they so deserve.”

Fr Bartlett said he hoped everyone would work together to resolve the issue.

“On behalf of the Diocesan Trustees, I encourage everyone associated with the school to work collaboratively to ensure a stable and supportive teaching and learning environment both within and around the school as young people prepare for their examinations,” he said.
“This includes dealing with any recently publicised issues regarding the school in a calm, constructive manner that does not impinge on the operation of the school or distract pupils, families, staff and management from providing the best possible support to pupils in this critical final term.”