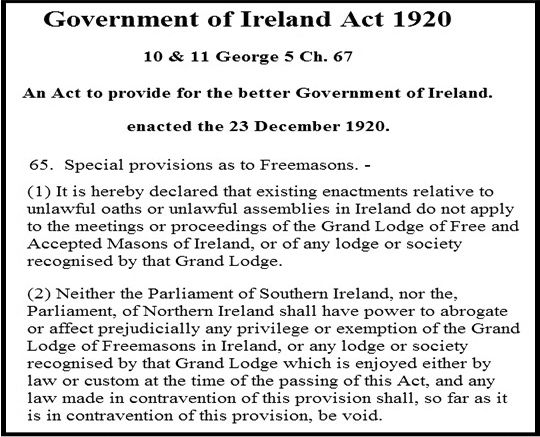 BIAS: The Government of Ireland Act of December 1920 put in place the conditions for the ‘Orange State’ with its elevation of unionism such as the paragraph above

IN four weeks we will mark 100 years since the Government of Ireland Act, which partitioned Ireland, was signed into law by an English King. Six years earlier James Connolly, writing in the Irish Worker in March 1914, warned that partition would mean “a carnival of reaction both north and south, would set back the wheels of progress, would destroy the oncoming unity of the Irish Labour movement and paralyse all advanced movements whilst it endured. To it Labour should give the bitterest opposition...”

The northern state that emerged following partition delivered all that Connolly feared. Political unionism and its business class built an apartheid ‘Orange State’ on sectarian divisions. They turned worker against worker and introduced a system of structured political and economic discrimination which continues to impact on northern society today.

Partition also inflicted great hurt on the southern economy. Places like Sligo and Monaghan and Derry, Dundalk and Newry were separated from their natural economic hinterland by an artificial border. Along the 300 miles of border farmers were cut off from their land; neighbours from neighbours; families from their relatives; businesses from their customers.

Irish unity is the best option for everyone on this island.

We can have a stronger economy, more jobs and a better standard of living for workers and families.

Our document busts the myths and shows that a united Ireland is achievable, affordable and necessary.@conormurphysf pic.twitter.com/Cz8MUSBr1W

Two conservative states, with two conservative elites, were established that took economic decisions that left the border region impoverished and a section of citizens in the north as second class citizens. We have had 100 years of disjointed and competing economic and social development on this small island.

In recent years, most notably since the Brexit vote of 2016, there has been a growing debate on the merits of Irish unity. Much of that has focused on the issue of the economy.

Today (Friday) Sinn Féin is publishing a new paper: ‘The Economic Benefits of a United Ireland’ which examines the failure of partition and sets out the economic benefits that will accrue from a single island economy in a united Ireland.

The paper reveals that the north is the slowest growing economy on these islands. The labour market is characterised by jobs that are lower paid and less secure than in the Irish state or in Britain. Some 20 per cent of workers earn less than a basic living wage. In addition the wasteful competition and division rising from partition undermine the fortunes of both sides of the border region. The result is an incoherent and unfulfilled economic development.

The ‘Economic Benefits of a United Ireland’ also refutes the claim that the Irish state cannot afford Irish unity or cope with the loss of the British subvention. The claim that the subvention is worth £10bn a year is false. The real figure is at most £6bn and closer to less than half that.

The threat posed by Brexit and Covid-19 have also created new challenges and new opportunities. A united Ireland offers the best opportunity to tackle these issues in a way that is to the economic advantage of the people of the island of Ireland.

‘The Economic Benefits of a United Ireland’ is an exciting contribution to the conversation about a new Ireland – a shared Ireland. It reveals an island economy capable of expanding its economic potential, creating new jobs, better paid jobs, building a better standard of living of all its citizens and first class public services, including a health service for everyone.
We should have the right to organise our own economy. And we will certainly do that much better than anyone in London.

The death of Danny Groves


IT is the nature of things that this column has been moved to record the deaths of friends more often than I would like to, but it is with the greatest sadness that I extend my condolences to the family of Danny Groves who died last Sunday. Danny died after a long battle with cancer. I want to express my sympathies to his wife Liz, and to his children Roisin, Bill, Jim, Eilis, Danny, Emma and Deirdre, and to his many grandchildren, great grandchildren and extended family circle.

I have known Danny and Liz for more years than I care to remember. The Groves family is one of those spinal republican families that have been involved in republican activism from the time of partition.

Danny was a member of the Tom Williams Pipe Band in the 1960s and participated in countless commemorations, Easter Parades and fundraisers for Sinn Féin and the National Graves Association. Joe Cahill was the President of the Band. Danny marched for civil rights in 1968/69 and in the pogroms of 1969 he was one of those who helped evacuate families out of Ardoyne into the west of the city.

Both Danny and Liz are from North Belfast. They moved to a flat in Lenadoon after they were married in July 1970 and then in 1972 moved again to Tullymore Gardens in upper Andersonstown. They lived three doors up from Danny’s mother, the indomitable Emma Groves. In December 1971 Emma, who was the mother of 11 children, was blinded by a British soldier who fired a rubber bullet at her through the window of her home. It was a devastating injury. Emma refused to allow her injury and disability to define her. Along with Clara Reilly she formed the United Campaign Against Plastic Bullets and with the support of Danny and her large family she campaigned tirelessly against the use of rubber and plastic bullets.

From those early years in the 1970s Danny and Liz have been part of the backbone of the Sinn Féin organisation in the Upper Andersonstown area. Despite having a large family there was always a ready welcome in their home for republican activists. Frequent house raids, harassment, constant arrests and threats by the British army and RUC were a regular feature of Danny’s life at that time. He and Liz refused to be intimidated.

Liz is one of the best known community workers in Belfast. She has been a key advice centre worker for Sinn Féin in Connolly House for many years and despite the Covid-19 pandemic Liz continues to work and use her experience on behalf of constituents.

During his illness Danny retained his strong sense of humour and although confined to his bed kept abreast of political developments locally as well as internationally. Danny was also more than willing to help where possible. Recently, Richard McAuley, who is involved in doing some background research for a Léargas book I am writing on Kathleen Largey/Thompson, contacted Liz and asked if he could talk to her and Danny about Kathleen. Both knew Kathleen and Eamonn Largey. While maintaining social distance Richard visited Danny and Liz. Danny’s memory was undiminished by the years or his illness. He and Liz were very helpful. Lots of craic about An Ard Scoil, the 43 Club and the old Felons at Milltown.

Danny will be missed. By Liz and his children and the Groves family. But also by his neighbours and many friends whose lives he touched and enriched over the years.


Decision on Pat Finucane inquiry will tell us much

THE courage and tenacity of the Finucane family after years of battling with the British state continues to amaze and inspire. Pat Finucane was killed in February 1989 by a UDA death squad working in collusion with RUC Special Branch, the British army’s Force Reconnaissance Unit and the British state,. For three decades the family, like many hundreds of others, have been fighting to get to the truth. Successive British governments have blustered and bluffed, stalled and lied in order to prevent this.

Last month a lawyer acting for the British Secretary of State for the north, Brandon Lewis, gave the High Court in Belfast a commitment that a decision would be taken on whether to proceed with a public inquiry on or before November 30. That’s next week.

Geraldine Finucane brought a judicial review against the British Secretary of State for his failure to implement last year’s Supreme Court ruling which criticised the British government’s failure to take a decision on establishing an investigation. On October 11 the barrister acting for Brandon Lewis told the court that he had been instructed to offer a commitment that a decision would be taken on or before November 30.

The judge adjourned the case until December. We now await the decision of the British Secretary of State.

Regrettably, the years of prevarication and disinformation around Pat’s case are part of a wider conspiracy by the British state to refuse to hold its security and intelligence agencies to account for their actions during the conflict. The decision by the PPS in relation to the Operation Kenova Case and the refusal to implement the Stormont House Agreement reached in 2014 are all evidence of this.

The decision by Brandon Lewis in respect of Pat Finucane will indicate whether it’s business as usual for this British government or if it is finally prepared to face up to its legal and international human rights obligations.