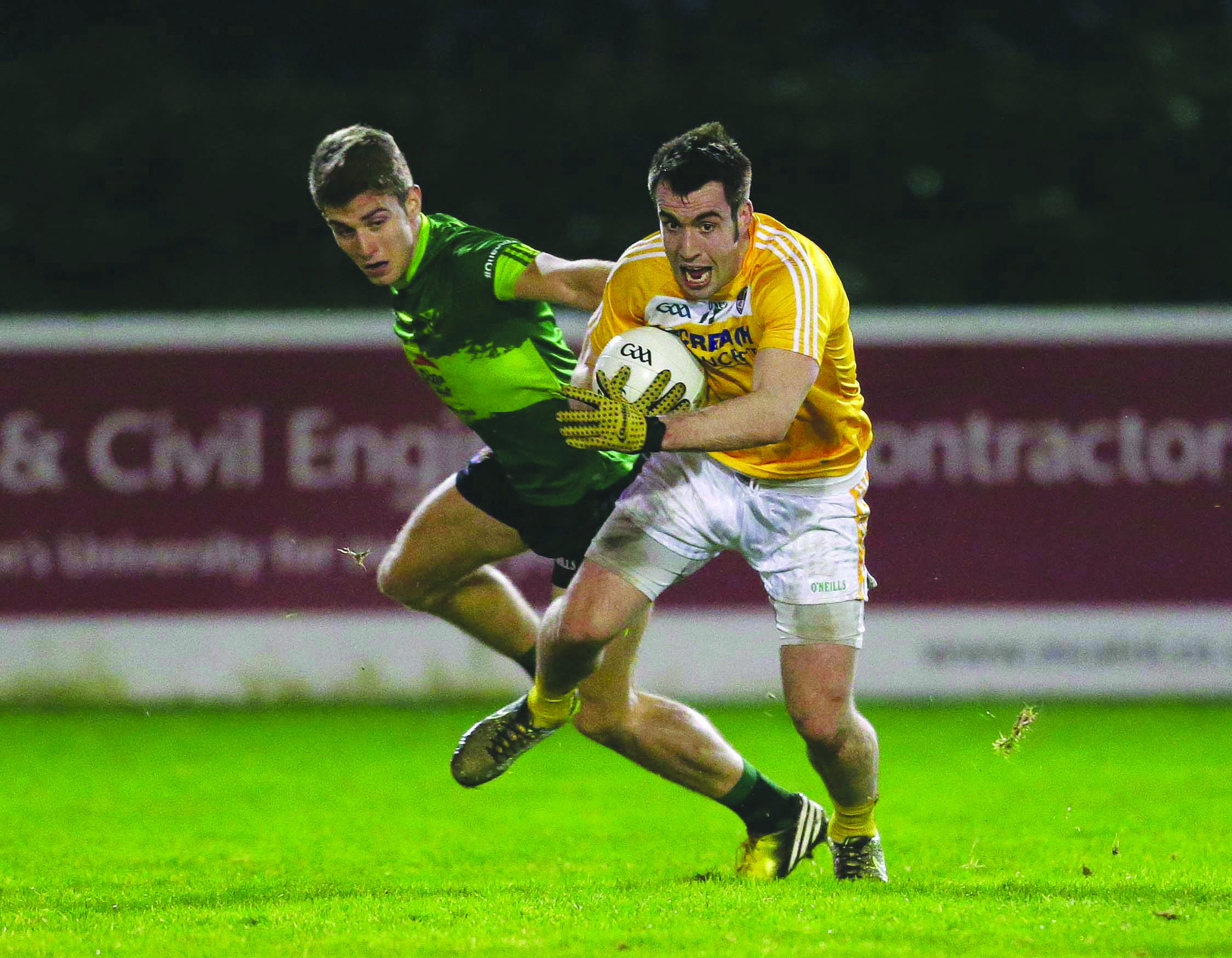 ANTRIM captain Kevin Niblock remains a major doubt for Sunday’s tie against Wicklow – a game which could see the Saffrons promoted to Division Three for next year. Should Antrim seal a win, they would guarantee themselves a place in the Division Four final and a berth in Division Three for 2016.

Louth and Wexford, who clash in Drogheda on Sunday, currently trail Antrim by two points with the Wee County taking on Antrim in round seven next weekend on Corrigan Park. However, Niblock is in danger of missing the trip to Wicklow.

Joint-manager Gearoid Adams revealed his skipper hasn’t trained since being stretchered off during the round five win over Waterford while Niall McKeever and Ryan Murray are also doubtful. “Ryan Murray, we are going to see how he is at training,” said Adams.

“There are question marks over Ryan and also over big Niall McKeever. He missed the last match with a thigh injury. “We are not 100 per cent sure about Kevin (Niblock). He is a strong player.

“He took a heavy knock the last day and we will probably make a late call on him. He hasn’t trained yet. He has come through three or four matches after picking up big knocks. In the first match against Carlow, he was carried off. He has been through the wars.

“We have a lot of niggling injury which haven’t cleared up. “We are just hoping that they will be ok for Sunday.”

Injuries to the aforementioned players would create further openings in Antrim’s starting 15. In recent weeks, Adams and Frank Fitzsimons have used their substitutes bench to good effect and Adams has hailed the strength-in-depth of the current squad.

“The London game was a potential banana skin and we got through it because of the depth of the squad,” said Adams. “The guys who came off the bench that day won us the match. Since then, a lot of those boys have kept their positions.

“The other boys are looking on from the sideline trying to get the positions back so there is a healthy competition for places. “There are guys who are raging that they aren’t on – and so they should be.

“Our job is going to be very difficult whenever we have 29 or 30 fit players.”

Experienced defender Justin Crozier remains sidelined with a hamstring injury. Despite his absence, Antrim’s defence over the course of the National League so far has been exemplary. Along with All-Ireland champions Dublin and Division Two finalists Tyrone, Antrim are unbeaten in five rounds and boost the best defensive record across the four divisions after conceding just 0-44 thus far.

Adams insists defeats to the Red Hands and Derry in the Dr McKenna Cup campaign helped toughen Antrim’s defensive resilience. “We focused on it because of the lessons in the Dr McKenna Cup,” added the Antrim boss. “In the McKenna Cup, we had a lot of players playing for the Universities. We learned from the Derry game, if we go toe-to-toe in certain games, we are going to be exposed.

“We have very good defenders and very smart defenders. “With the system we have, we have made it very hard for teams to score against us and we aim to keep that trend up.” Should Antrim maintain their average concession of less than nine points per game, it is save to assume they will come away from Aughrim this weekend with the two points required to seal promotion.

However, the rural Co Wicklow venue is a notoriously difficult ground to get a result from. In 2009, Ulster sides Fermanagh, Cavan and Down all suffered Championship exits at the hands of the Garden County and Adams is expecting a tough battle on Sunday.

“We are where we want to be,” said Adams. We just have to focus and take each game as it comes. We are not looking past Wicklow. “We need two points and that’s what are we are aiming for.

“We will respect Wicklow, like we have respected every team in the division. I know from experience that it isn’t an easy place to go. “We are going to have to go down with a good gameplan and we will have to be firing on all cylinders to get the two points and get out of Division Four. “It is a real tight pitch. They are coming off the back of a defeat to Wexford.

“They will be hurting a bit and they can’t gain promotion themselves. “Like the London game and the Waterford game, they will be coming out to frustrate us and they will be trying to get ready for the Leinster Championship.”