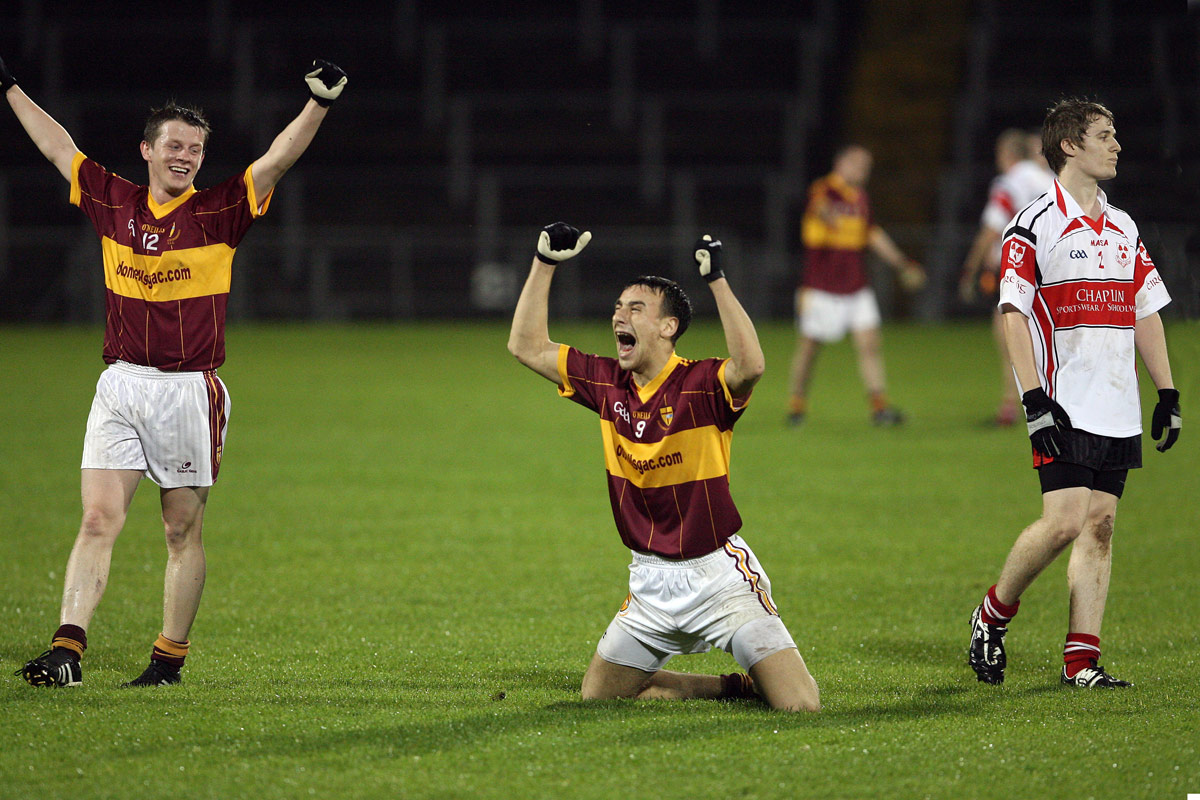 O’DONNELL’S secured back-to-back Junior football titles on Saturday night when they battled to a one point win over Éire Óg at Casement Park.

This game will not be remembered as a classic but that will matter little to the Whiterock men, who can now plan for an assault on the Ulster Championship against the Armagh representatives.

The final whistle was greeted with scenes of wild celebration from the players and management as their decision to stay at the junior grade was vindicated by the win.

However, they will be aware that a vast improvement is required if further progress is to be made this year but team boss Joe McVeigh was full of praise for his players efforts at the final whistle.

“Over the past month we have struggled with injuries and two lads out there – James Branniff and Fergal McNerney – were getting physio right up until the last minute,” revealed the O’Donnell’s mentor.

“Our lads dug in deep. Sean Hughes gave his all for the 20 minutes he was on the field. John Lavery was fantastic at full back and our defence was supreme from midfield back.

“If we took our scores there we could have wrapped the game up by half time because we kicked about nine wides.

“That’s down to inexperience of the young lads in the forward line who haven’t been getting football all year or just playing South Antrim football.”

The defending champions shot eight first half wides, as their superiority was not translated into scores.

They had blazed three shots past the post before Éire Óg opened the scoring after six minutes when Conor McKenna fired over from 40 metres in their first attack.

Back came O’Donnell’s and they were level three minutes later when Jim Donnelly burst up the right and fed the supporting Padraig McRory who intelligently fisted over.

The game just never caught fire and was more perspiration than inspiration as both sides struggled to take proceedings by the scruff of the neck.

O’Donnell’s continued to waste scoring opportunities despite having more of the play and converted frees from Peter Elliott and Eamon Wilson helped Éire Óg into a 0-3 to 0-1 lead after 19 minutes.

Any hopes their supporters had that they would then open up and push on were dashed as the Derriaghy club would fail to add to their tally for 35 minutes.

The Whiterock men fared little better but did manage to level before the half when a brace from Chris Fay – one a free and the other a fine effort from play – locked the sides at 0-3.

It was hoped the game may come to life after the restart but this failed to materialise as scores were at a premium.

Éire Óg were looking slightly better going forward but the final ball let them down, as they couldn’t add to their tally.

O’Donnell’s had Fay to thank as the wing forward kept the scoreboard ticking over and two frees moved them 0-5 to 0-3 ahead after 41 minutes.

While there was plenty of honest endeavour the spark that would ignite this contest failed to appear.

After what seemed like an eternity, a Peter Elliott free finally opened the Ógs account for the second half on 54 minutes but the gap was two again minutes later.

Brendan Laney had an opportunity for an easy point but went for goal and his shot was tipped out for a 45 that James Branniff converted.

Éire Óg needed a goal but it didn’t look likely to arrive and deep in injury time McKenna fired over to cut the gap to one.

This seemed a strange decision as from the resulting kick out the final whistle sounded to confirm O’Donnell’s as Antrim Junior champions for the second year in a row.

The win clearly meant a lot to the O’Dees players and management judging by their reaction and team boss McVeigh singled out one player for special praise and said thy are now looking forward to their Ulster campaign.

“Martin McLoughlin came on there with ten minutes to go. He has been with our club since he was ten years of age,” he said.

“He got a medal last year even though he was injured but this year he isn’t injured so he gets his ten minutes of glory. This means everything to him and to everyone at our club.

“To win this back-to-back is great. We will have our injuries sorted out when we come back here in a couple of weeks when I think it’s Éire Óg from Armagh we play.”