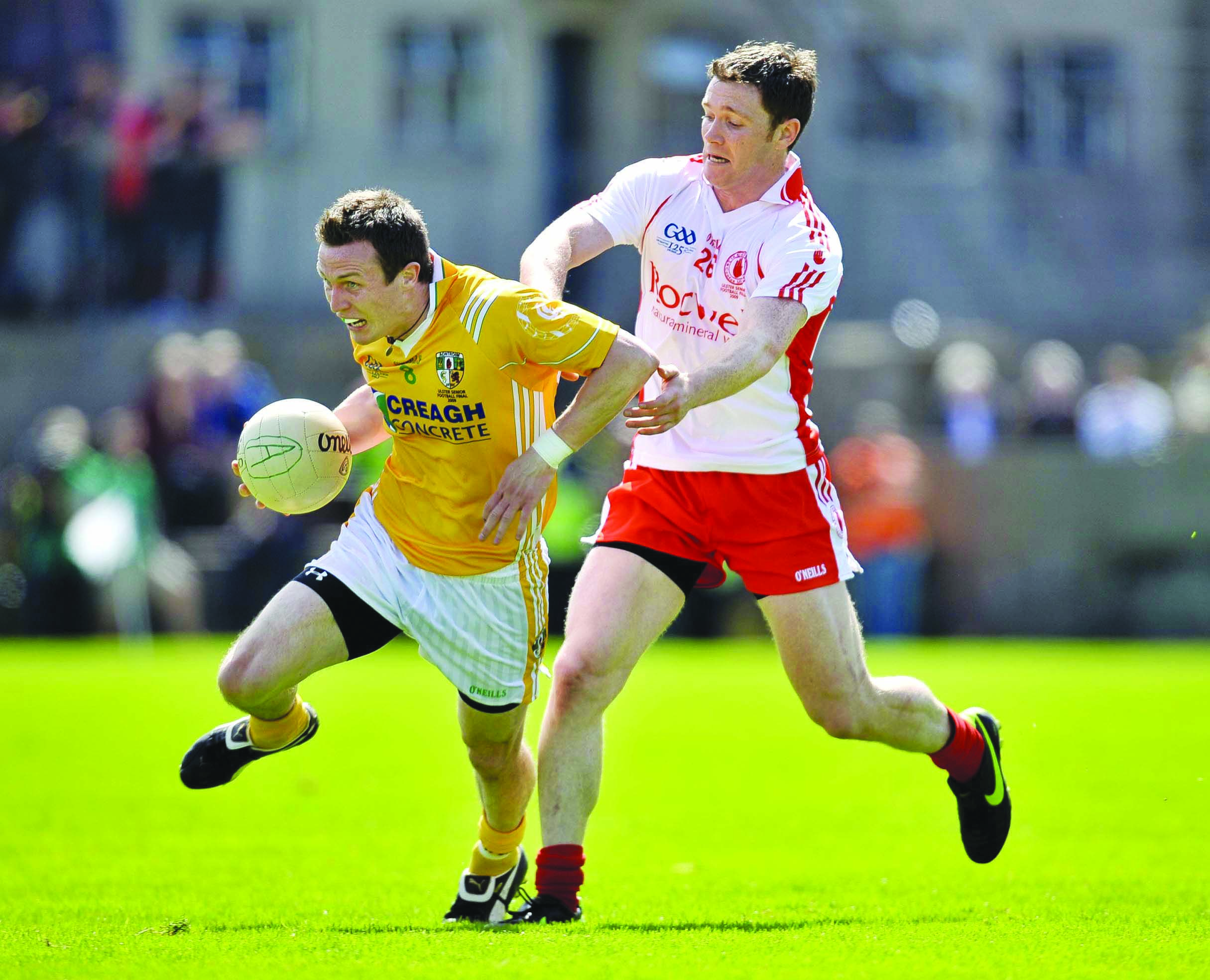 ANTRIM’S new management team will face a clash with their former mentor early in 2021 and Stephen O’Neill, who was named in Enda McGinley’s backroom, says he is looking forward to sharing a sideline with Mickey Harte.

The legendary Tyrone boss was surprisingly named as Louth manager on Monday night while, over the weekend, McGinley was named as Lenny Harbinson’s successor with O’Neill joining St Gall’s ace Sean Kelly and Errigal Ciaran native Stephen Quinn in an impressive backroom team.

McGinley’s managerial ticket helped him get the nod ahead of a joint-ticket of Kevin Madden and Tony McEntee while former Down and Armagh manager Paddy O’Rourke was also interviewed for the post.

McGinley, who was appointed on a three-year term with a review after the second year, has family ties with the county and is married to former Antrim Ladies footballer Geardine McGinley (née McCann) and is brother in-law to Michael and Tomás McCann.

Failure to gain promotion from Division Four over the last three years ultimately led to Harbinson’s departure and Antrim’s first priority will be to clinch Division Three football next season.

The new management team will come up against familiar opposition on the sideline next year when Antrim meet Louth in Division Four with Gavin Devlin joining Harte in the Wee County.

O’Neill was part of the Tyrone management in 2018 and 2019 as a forwards coach with the Red Hands reaching the All-Ireland final in 2018 and he hopes he picked up plenty of good habits from Harte over the years.

“It was definitely a shock appointment – it will leave it (Antrim versus Louth) an interesting fixture next year,” said O’Neill.

“It will be something to look forward to and it will be good to see them again.

“Working alongside him (Harte), it was just his mannerisms and how he would handle players that’s you’d pick up on. I’ve been working with him for so long... it is the standards he sets as well and what he would have demanded off you as a player.
“That was the case throughout my time as a player and working with him as a coach. Things were well planned out and thought out. A lot of detail went into preparing for games. I hoped to have learned a bit from him during the years I’ve worked with him. Hopefully, I can bring some of that and use it to Antrim’s advantage.”

McGinley and O’Neill were integral parts of Mickey Harte’s All-Ireland winning sides from Minor (1998) and U21 (2000, 2001) through to senior successes in 2003, 2005 and 2008.
The pair also won two National League titles, five Ulster titles and they’ve both represented Ireland in the International Rules Series.

McGinley’s Errigal Ciaran clubmate Stephen Quinn worked alongside him with Derry side Swatragh for the last two seasons while former Antrim and St Gall’s star Sean Kelly take his first steps into an inter-county role.

Kelly, who won 13 club championships with St Gall’s as well as an All-Ireland club title in 2010, is renowned as one of the best footballing brains in the county and managed the Milltown Row side for three seasons from 2017 to 2019.

While Quinn will primarily be involved with training the Saffrons, new boss McGinley is reluctant to pigeon-hole O’Neill and Kelly.

Instead, the duo will share assistant-managerial and coaching roles with McGinley having the final say on decisions.

O’Neill, who will also remain as Dungiven senior manager for 2021, said he is excited to work with his former Tyrone colleague and feels the new Antrim management team have a lot to offer the county.

“Inter-county management is where everybody wants to be,” added O’Neill.

“A lot of club managers want the opportunity to work at that level. I am very friendly with Enda (McGinley) and I’ve known him for a long time.

“We always said that if either of us were lucky enough to get that opportunity, we’d like to work with each other.

“When the opportunity came, I was lucky that Enda asked me to come in and help him out.

“It is a learning process any day you go out. Working with Enda, Sean (Kelly) and Stevie (Quinn), I’ll learn plenty from them and I’m sure they’ll pick up things from me.

“We’ve all met and we’ve talked about our philosophies and how we’d like to play the game and how we like to coach. We are all singing off the one hymn sheet. I think we can all chip in and add to it. Obviously, the more we work with the players, the more we can hone in on the things that need more work. We can use video work to show the players what we are talking about. We can all work together.

“Sean (Kelly) would be more defensively minded, Enda (McGinley) maybe around midfield so I’ll be more into the attacking side of things, but I think it is a nice blend.

“From meeting everyone and talking to Stevie (Quinn) as well, I think we’ll work well together. I’m hoping that can transfer to the players on the training pitch and in the games.”

O’Neill added that he has no qualms with mixing his commitments between Antrim and Dungiven.

However, he is hoping that a split season will be retained for club and county for the forthcoming campaign.

“I would be definitely hoping that the split season is retained,” said O’Neill.

“When I was asked to take the Dungiven job last year, they’d a very young team and they’ve some very good players coming through. It would made clear that they didn’t want someone for one year – they wanted continuity with someone taking them for two or three seasons.

“I had already committed to Dungiven and had plans in place when Enda phoned me about Antrim. I felt it was maybe the wrong time for me, but Dungiven have been very accommodating and they are happy to share me and Enda and Antrim are willing to do that as well.

“We’ll have to see how things go, it will be busy, but it is definitely doable. If it is a split season, it will work out far better for me.”