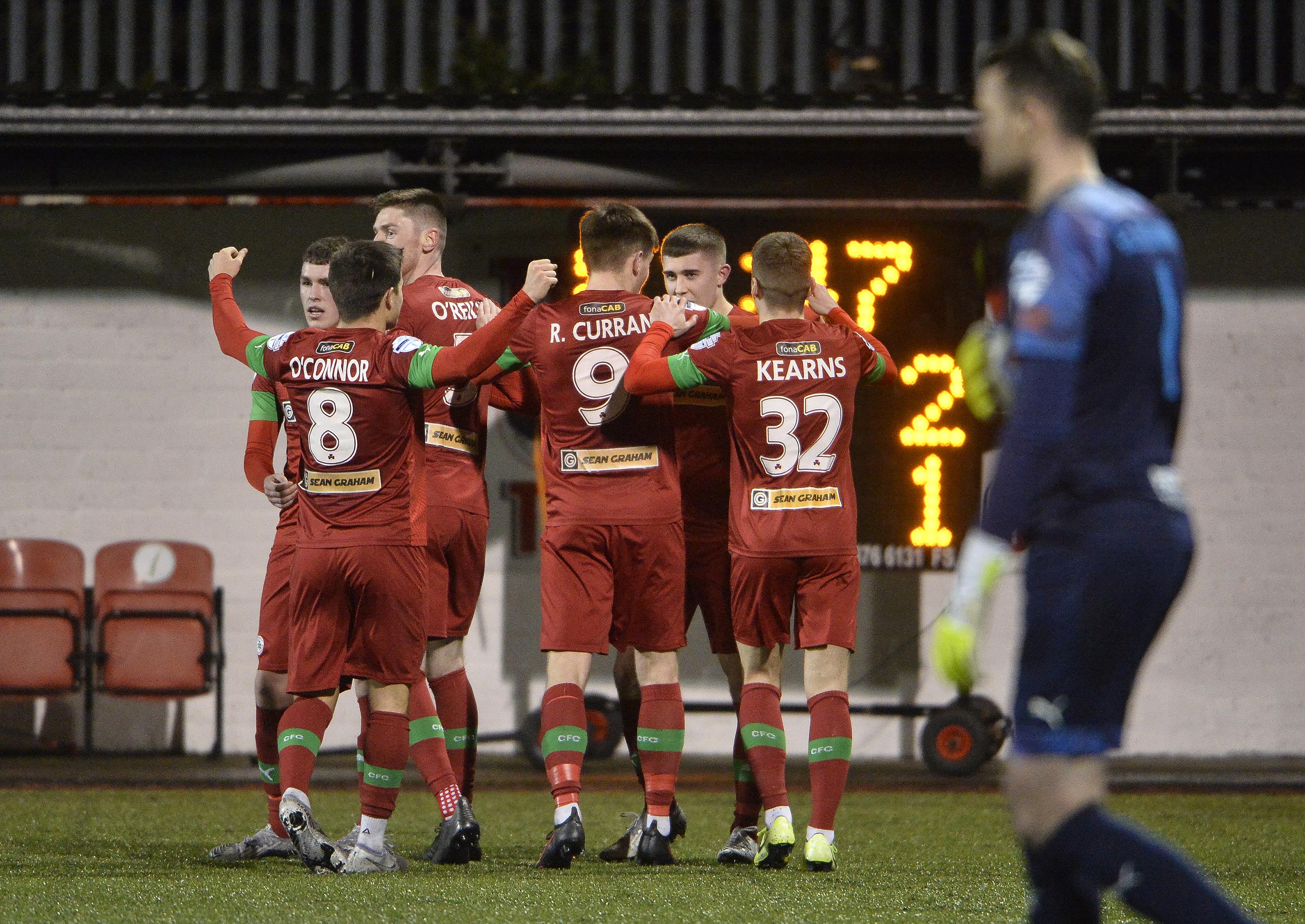 Paul O'Neill is mobbed after scoring the winner on Tuesday Presseye

Paul O’Neill popped up with a winning goal in the last 10 minutes to ensure that Cliftonville made it back-to-back wins for just the second time this season with a 2-1 victory over Ballymena United at Solitude on Tuesday evening.

Leading through a Ryan Curran goal on the half-hour mark, the hosts were pegged back before the break through Shay McCartan, whose brace saw the Sky Blues leave with a 4-0 win earlier in the campaign.

It looked as though the sides would share the spoils on this occasion until O’Neill converted from Garry Breen’s cross inside the last 10 minutes to give Paddy McLaughlin’s side another slender victory.

“A win’s a win,” reflected McLaughlin.

“Sometimes you can win playing nice free-flowing football, sometimes the conditions and schedule might catch up with some of the players and be heavy on their legs and it might just be a matter of grinding it out, putting your body on the line and hoping someone pops up with a bit of magic in the final third, which we did with young Paul O’Neill.

“I think we slightly shaded the second-half. The fitness levels of the players kept going and we could see that Ballymena were starting to drop off and tire and we knew we had to put the squeeze. Fair play to the boys, they popped up with the result and did the business again and I cant give them enough credit.”

McLaughlin made one enforced change to the side that defeated Larne at the weekend with match-winner Ronan Doherty missing out through injury as Barry Coffey came into the starting 11, while it an historic 300th appearance for skipper Chris Curran.

It was a pretty even opening quarter at a blustery and wet Solitude with the first chance falling to the hosts after Barry Coffey was tripped on the edge of the area.

Aaron Donnelly called United ’keeper Ross Glendinning into action from the resulting set-piece, but Glendinning got down low to claim the left-back’s effort which went underneath the wall.

Coffey’s fellow team-mate at Celtic, Ben Wylie, was next to try his luck at the other end after being teed up by Jude Winchester, but Wylie shot straight at Aaron McCarey.

The visitors again went close through a James Knowles corner as Conor Keeley appeared to bundle over Garry Breen in the process of attacking the ball but no free-kick was given and Keeley headed wide of the target.

The breakthrough arrived on the half-hour mark. Barry Coffey pressed Jim Ervin on the halfway line and then fed the ball to Ryan Curran who adjusted his run and slipped a low shot past Glendinning and into the net for his eighth goal of the season.

Ballymena were almost back on terms on 41 minutes as Josh Kelly slipped in Shay McCartan and Garry Breen nipped in to put an end to any imminent danger.

Two minutes later, the Sky Blues did hit back as Trai Hume crossed from the right and Breen could only half clear with McCartan on hand to hammer past McCarey and level at the interval.

Ballymena almost hit the front early in the second-half as Winchester played a delightful angled pass to Sean Graham who squared the ball to Wylie, but the on-loan Celtic midfielder shot high over the bar.

At the other end, Kris Lowe found Rory Hale who in turn found Chris Curran in the area and the Reds’ captain pulled the ball across goal, but nobody was there to take a chance.

Both teams pushed on for a second goal but the game appeared to be fizzling out to a draw until the final 10 minutes when Cliftonville upped the ante.

On 81 minutes, substitute Daire O’Connor slipped in Paul O’Neill whose shot was deflected behind for a corner off Jim Ervin.

The resulting corner from Aaron Donnelly landed to Garry Breen and the centre-back’s header into the area was half-cleared. Breen had a second bite of the cherry and a pinpoint cross from the right fell to O’Neill who headed past Glendinning to make it 2-1 despite United appeals that the striker was offside.

Ballymena pushed for a second equaliser but failed to test McCarey in the Cliftonville goal as the hosts ran out slender winners. 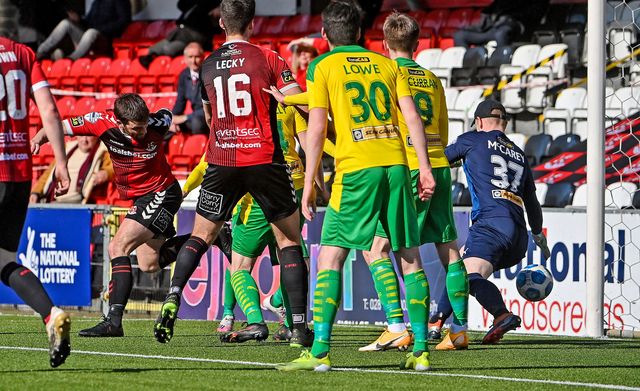 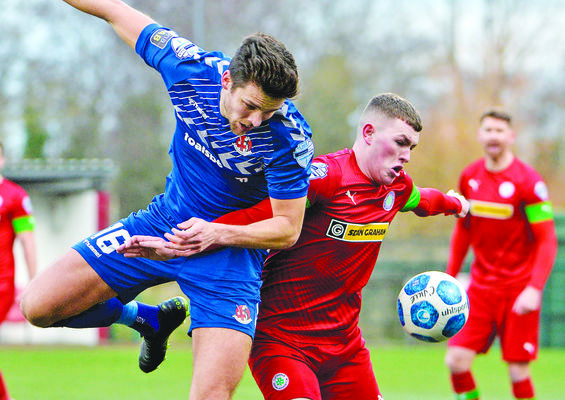 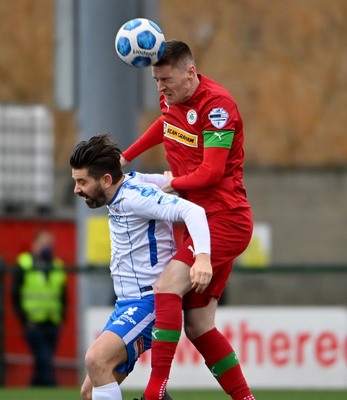